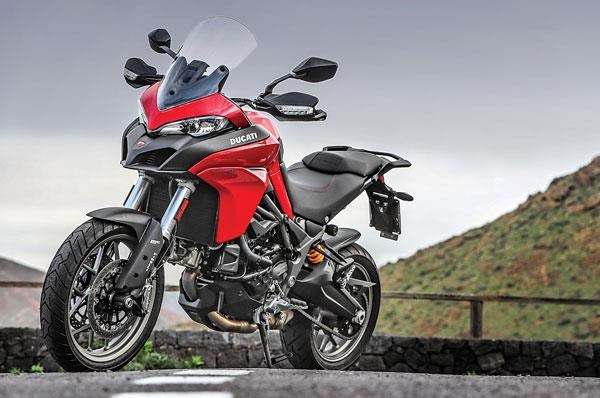 An in-depth look at what separates the new Multistrada 950 from its larger twin in terms of specification and equipment.

Ducati has just launched its latest adventure-tourer, the Multistrada 950. On the surface, it looks very similar to the highly-capable Multistrada 1200. But is it simply a case of scaling down or is there more to this ‘smaller’ Multistrada than meets the eye? To better understand what makes this new 950 tick, we are delving deep into what separates it from the 1200 that we’ve come to love so much.

As the name itself suggests, the Multistrada 950 is running a smaller motor when compared to the Multistrada 1200. That’s not to say that this motor is just a smaller capacity version of the larger one, the Multistrada 950 borrows the Testastretta 11o motor from the Hypermotard. This 937cc, L-Twin, liquid-cooled motor features four valves per cylinder and is capable of producing 113hp of peak power coming in at 9,000rpm, and a maximum torque figure of 96.2Nm that comes in at 7,750rpm.

The Multistrada 1200’s motor is a whole different beast altogether. This 1,198cc, L-Twin, liquid-cooled, Testastretta motor comes armed with DVT (Desmodromic Valve Timing) technology, which is basically Ducati-speak for variable valve timing. This allows the twin-spark engine to continuously advance or retard both exhaust and inlet valve timing, resulting in increased power at higher engine speeds, while at the same time get better torque at lower rpm. So what you get is a whopping 160hp of peak power at 9,500rpm and 136Nm of torque coming in at 7,600rpm.

Both the Multistrada 950 and the 1200 feature 48mm KYB fully adjustable upside-down forks at the front and a fully adjustable Sachs monoshock at the back. However, the 1200S variant has a few suspension tricks up its sleeve. It get the Ducati Skyhook Suspension (DSS) system which allows riders to electronically change suspension parameters such as preload, rebound and compression damping. All the rider has to do is change the riding mode and the bike can either pull up suspension settings to match that mode or they can even set custom suspension parameters. Suspension travel across the 950, 1200 and 1200S remains identical at 170mm (for both front and rear).

Thanks to the bigger double-sided swingarm, combined with the larger 19-inch front wheel, the Multistrada 950 has a 1,594mm wheelbase. This is the same as the 1200 Enduro, but significantly longer than standard 1200 and 1200S. This does add to the overall length of the 950, making it about 80mm longer in totality as compare to the Multistrada 1200. And while there’s no difference in overall height, the 950 has a fixed seat height of 840mm, while the 1200’s can be adjusted from 825-845mm.

Surprisingly, there’s not a huge weight difference between the two models. The 950 has a kerb weight of 229kg, while the ‘larger’ 1200 and the 1200S are heavier by 3kg and 6kg, respectively. But the 950 feels lighter than that, as Ducati ditched some centre panels for this bike (much like they did on the 1200 Enduro), which makes it narrower right under the saddle.

The Multistrada 1200 really set the benchmark when it came to electronic aids on adventure touring motorcycles. It brings to the table a five-direction Inertial Measurement Unit (IMU) that can read the bike’s roll rate, yaw rate, longitudinal acceleration, transverse acceleration and vertical acceleration, along with wheel speed. This data is then fed to the Bosch 9ME cornering ABS, wheelie control and Skyhook suspension, which adjust according to the bike’s calculated attitude in mere milliseconds. The result is a near-telepathic system of electronic control over the motorcycle’s traction and orientation, which really allows riders to maximise use of the big motor’s grunt.

The electronics on the Multistrada 950 are a much simpler affair, relatively speaking of course. There are four riding modes – Urban, Touring, Sport and Enduro – just like in the 1200, but there’s pretty much a conventional wheel-speed-based eight-level traction control system managing grip, and a basic three-step ABS which doesn’t take cornering into consideration. The 950 doesn’t feature any wheelie control either.

The Multistrada 950 and the base 1200 share the same all-LCD instrument cluster and even switchgear is more or less the same. However, the 1200S gets a very smart-looking full-colour TFT display and a five-way direction pad on the left switchgear to navigate menus on the instrument screen. The 1200 also gets cruise control as standard, a feature notably missing on the 950.