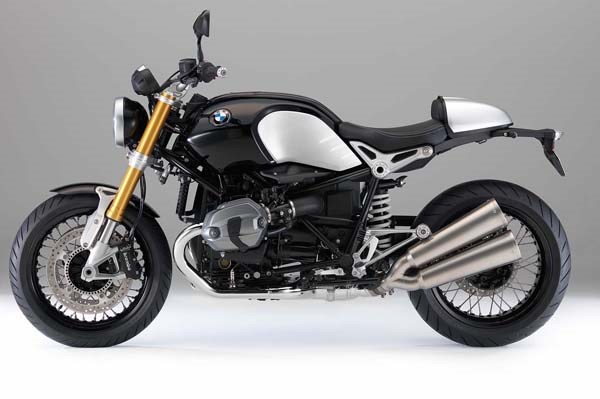 BMW's cafe racer gets typical cafe racer styling with a modern touch and a muscular stance.

The German bike maker is offering customisable options for its patrons such as a carbon-fibre mudguard, bags that can be mounted on the tank and rear, and an exhaust system from Akrapovic, manufacturer of exhaust systems.

The R nine T is powered by a four-stroke, 1170cc, air/oil-cooled, twin-cylinder engine that is tuned to offer 108.5bhp of maximum power at 7550rpm and peak torque of 12.1kgm made at 6000rpm. It weighs 222kg, owing to the heavy boxer engine and the fact that it is an old school cafe racer, not a track focused vehicle.

The bike is constructed around a four-section frame with one front and three rear sections, a load-bearing engine-gearbox unit and a removable pillion frame for single ride use. The front showcases USD telescopic forks, while the rear gets a monoshock mounted onto a single sided swingarm. Spoked rims add to the retro design cues of the cafe racer. Stopping power is taken care of by ABS equipped 320mm front discs and a 265mm rear disc brake.

On sale only at Navnit Motors in Mumbai, the BMW R nine T can be yours for Rs 23.50 lakh (ex-showroom, Mumbai), with just one colour to choose from - black with silver combination.