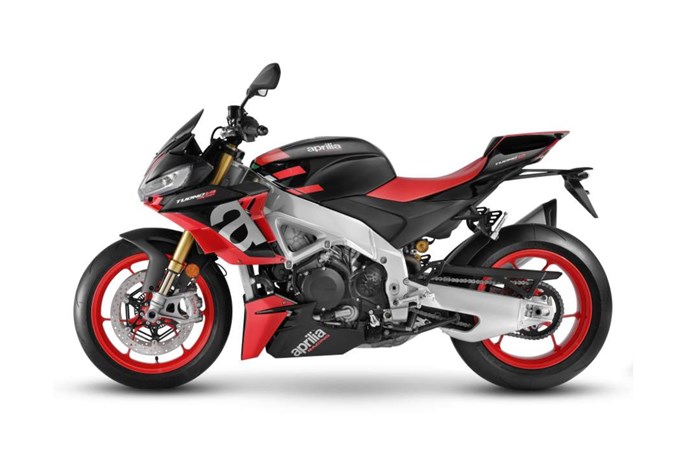 The Aprilia Tuono V4 is expected to go on sale in international markets shortly.

Aprilia has taken the wraps off the 2021 Tuono V4, that features a raft of updates over the outgoing Tuono V4 1100.

The most striking change to the Tuono V4 is in its sharper styling. It is certainly inspired by the Aprilia RS 660, showcased a few months ago. As a result, the front end looks pretty aggressive. Complementing the sleek LED headlamp setup is the small fly screen above it, that sits neatly and is claimed to offer better wind protection.

The side fairing incorporates winglets for better downforce, a trend that's picking up in the segment over the last few months. The winglets are also said to aid in engine heat management.

Another advantage of the new design is seen in the improved ergonomics. While the handlebar is now much easier to reach, the new fuel tank and seat allow for a roomier, riding position. The pillion seat appears to be larger than the one on the previous motorcycle; that was nothing but a joke considering its puny size.

Aprilia has updated the Tuono's 1,077cc, V4 engine to comply with the stringent Euro5/BS6 emission norms. The good news though, is that the engine makes the same peak power (175hp) and peak torque (121Nm) as before. What we are itching to know is whether or not the Tuono V4 has retained its characteristic, loud exhaust note that resembled the sound of a MotoGP machine.

As far as electronics are concerned, the Tuono gets a six-axis IMU assisted suite that features six ride modes. Three ride modes are dedicated towards street riding and three for the race track. These modes alter the traction control, engine braking, anti-wheelie and cornering ABS settings. These functions can be accessed via the new, larger TFT display.

What hasn't changed is the frame and suspension setup, although the swingarm is a new, aluminium unit.

As before, the Tuono V4 is available in standard and Factory trims, with the latter featuring a dedicated black-and-red colour scheme and Öhlins Smart EC 2.0 semi-active suspension.

The 2021 Aprilia Tuono V4 is set to go on sale in international markets soon and the bike is expected to be launched in India, later this year. Expect the motorcycle to be priced well beyond the Rs 20 lakh mark.