The CB300R was seen in India during an advertisement shoot; to be launched on February 8. 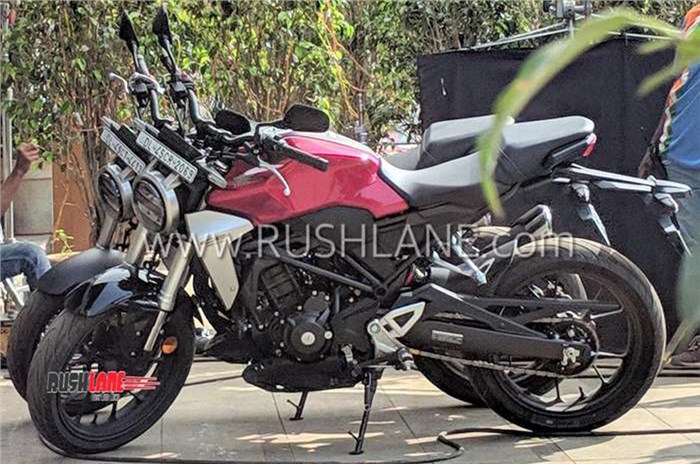 A pair of Honda CB300Rs was spotted in India during an advertisement shoot for the upcoming bike. While the bikes carry Indian registration plates, they are missing saree guards (mandatory in India), which we believe could have been temporarily taken off for the shoot. The picture also reveals a few details about the India-spec CB300R.

Honda first announced that it was launching the CB300R in India on January 15. The company also gave us a tentative price of ‘below Rs 2.5 lakh’ at the time. Not long after, we got an official launch date of February 8 for the sport-naked bike.

While we don't have too many details of the India-spec model, the image from the ad shoot reveals that the bike will get Michelin Pilot Street tyres instead of the Dunlops found the on international-spec models. We believe this could be one of the cost-cutting measures Honda has taken.

The India-spec CB300R retains other premium components like the LED headlight and USD fork. What remains to be seen is the type of brakes that will make their way to our version. There is a high probability that Honda will ditch the petal discs and IMU-based ABS system for conventional discs and a dual-channel ABS system. That said, one can expect the bike to be powered by the same 286cc, single-cylinder, liquid-cooled, four-valve, DOHC motor that is mated to a 6-speed gearbox. This engine makes 31.4hp and 27.5Nm of torque in the United Kingdom, and the India bike could make similar figures. We can also expect the India-spec bike to have a kerb weight figure close to the UK bike’s 143kg figure, which will make it one of the lightest bikes in the segment.