xEV rated: An in-depth look at all types of electrified cars

xEVs, or electrified vehicles, hold the key to clean mobility. We tell you what’s in store. 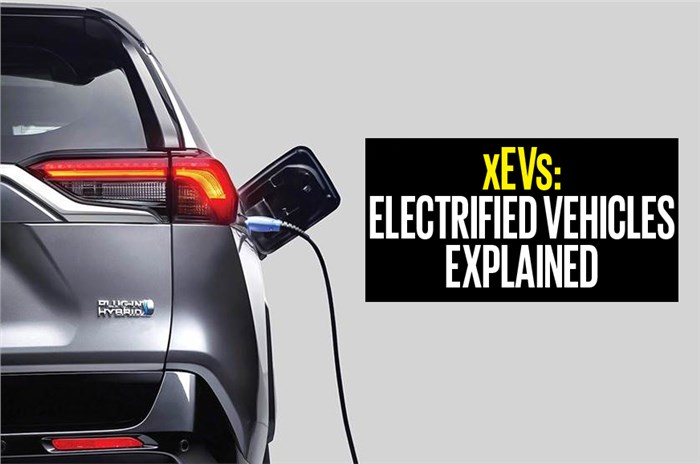 In its long and illustrious history of well over a century, the automotive industry is currently witnessing one of its most disruptive eras. Carmakers are involved in the race for autonomous cars on one hand, and the charge towards clean mobility on the other. Thing is, while the former could be classified as a ‘want’, the looming threat of climate change has upgraded the latter to a ‘need’. Electrification has been deemed the best way forward with many manufacturers relying on rapid expansion of their electrified vehicle (xEV) portfolios in the years ahead to reduce harmful emissions.

While some carmakers are hedging their bets on battery electrics, others believe hybrids to be the more pragmatic approach. Hydrogen fuel cells are also being touted as a solution. Over the following paragraphs, you’ll read what each type of xEV is like and how it works. Toyota's entire electrified range includes the battery electric EQ, the Mirai fuel cell vehicle as well as all forms of hybrids represented by the Glanza, Camry Hybrid, Prius and Prius Plug-in Hybrid. But what does each option entail? Why does it have potential, and what could be a stumbling block in India? Read on to know. 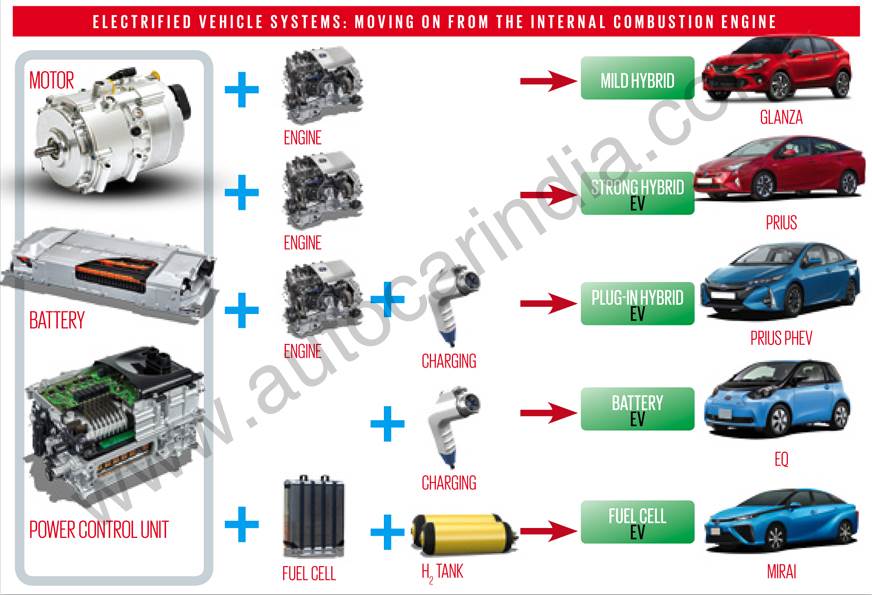 We’ll start with the darling of industry watchers and policy makers – battery electric vehicles (BEV). The vehicles feature a full-electric drivetrain that draws power from a battery pack. Forget tailpipe emissions, BEVs don’t even have tailpipes. But what’s often overlooked is its indirect carbon footprint – they are only as clean as the source of their electricity. In India, where 60 percent of power generation is from fossil fuels, BEVs aren’t quite as green as they’re made out to be.

A limited driving range, long charging times and the absence of dedicated charging infrastructure have also slowed down the acceptance of EVs in India. And then there’s the matter of price. A significant portion of the cost of a BEV comes from the battery pack, of which 65 percent can be attributed to the raw materials. Other core components which significantly add to the cost are the traction motor and power control unit (PCU). The absence of a local supply chain for these subsystems ensures that BEVs are almost always too pricey when compared to like-sized combustion-engined cars.

With pure EVs posing numerous challenges, another way to go about electrification is hybridisation. Hybrid electric vehicles pack in two power sources – an internal combustion engine and an electric drivetrain – which provide motive force. Hybrids can be further categorised based on the level of electrification. Micro hybrids are essentially conventional vehicles with auto start-stop functionality. Minimising engine idle time brings with it benefits to fuel economy. However, owing to limited aid from the electrical system, it remains a bit of a grey area to classify these as hybrids. The e-motor in mild hybrids, such as the Toyota Glanza, can assist the engine by providing additional torque in short bursts. Functions like regenerative braking and auto start-stop also lead to noticeable gains in economy. However, with a fairly limited battery capacity, the motor cannot independently propel the vehicle, which does blunt the effectiveness of the mild hybrid system.

Moving a step further and advancing the level of electrification brings us to strong hybrid electric vehicles like the Toyota Prius and Camry Hybrid. These consist of a combustion engine and an electric motor that can work independent of each other, as well as in tandem. The motor alone handles propulsion in situations such as low-speed city driving, when the combustion engine is at its inefficient worst. Picking up the pace brings the engine back to life. This automated shuffling between the combustion engine and electric motor results in a major uptick in fuel efficiency. As an added plus, strong hybrids can deliver emission levels that are a fraction of those prescribed by even the latest BS6 regulations.

Effectively an extension of strong hybrids, plug-in hybrid electric vehicles (PHEVs) like the Toyota Prius Plug-in Hybrid are as technologically similar to BEVs as hybrids can really get. In addition to being topped up by the engine and regen braking, their batteries can also be recharged by simply plugging in. With higher capacity batteries than other forms of hybrids, PHEVs can typically travel for 30-60km in pure electric mode and consequently, the combustion engine need not even kick-in during city commutes, if driven sedately. This allows a PHEV to effectively operate as a BEV in urban environments and drastically cut down on tailpipe emissions.

In a wide range of clean technologies developed by automakers, there exists one that blurs the lines between BEVs and strong hybrids. Known as an extended range electric vehicle (EREV), it constitutes an engine, a battery pack and a motor, just like any other form of hybrid. The engine, however, doesn’t power the wheels directly and solely acts as a generator to top-up the battery. Akin to a BEV, only the motor powers the wheels, utilising charge from the battery pack. The advantage of such an arrangement is that the engine can operate at its most efficient point, since it isn’t directly providing the motive force. And having an on-board powerplant for the battery pack ensures that range anxiety won’t be a concern.

In a way, the more powerful variety of hybrids are the missing link between pure combustion engine cars and full EVs. These hybrids sit bang between the two when it comes to tailpipe emissions and technology, which make them particularly appealing in the India scheme of things. If they catch on, powerful hybrids can create demand for electrified technologies, encourage localisation of core components like motors and batteries, and bring down costs which, in turn, can aid a smooth transition to greater BEV adoption further down the line. But for hybrids to catch on, the price increment to a combustion engine car needs to come down first. Government incentives could open the doors.

Another up and coming technology in certain markets like Japan is the fuel cell electric vehicle (FCEV). In addition to having generic components like an e-motor and battery, an FCEV packs in a hydrogen storage tank and fuel cell stack. Utilising hydrogen and oxygen (air), fuel cells generate electricity to power the motor, with the only by-product being water.

With zero emissions, high driving range and quick refuelling capabilities, FCEVs possess immense potential. However, the use of hydrogen as a fuel introduces new roadblocks – hydrogen production isn’t widespread, and storage and transportation of the high-energy gas can be difficult.

An overview of the different forms of electrification reveal each technology has its own merits and demerits. While a solution may be suitable to a specific segment of the market, there is no one silver bullet to combat our emission woes. Still, the case for going the hybrid route appears the strongest simply for its wider impact on the electrification ecosystem. Attempting to pole vault straight to full electrics might be biting off more than we can chew. 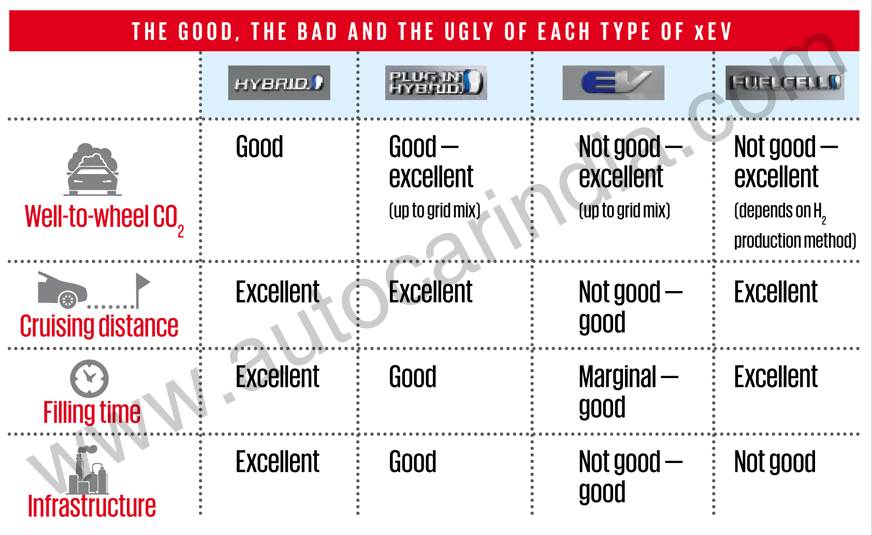