The Ford DNA and more 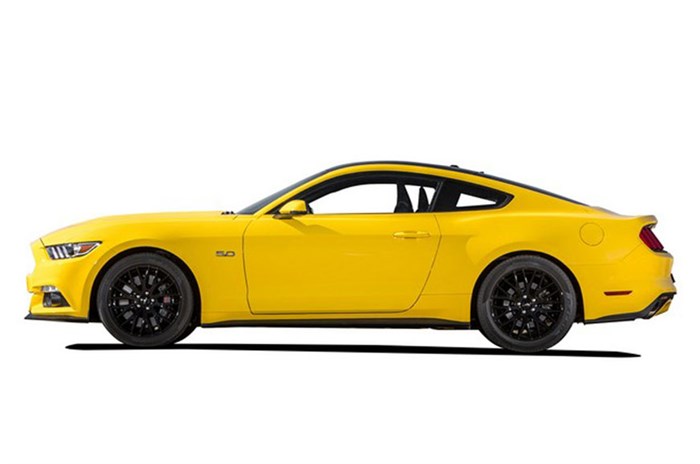 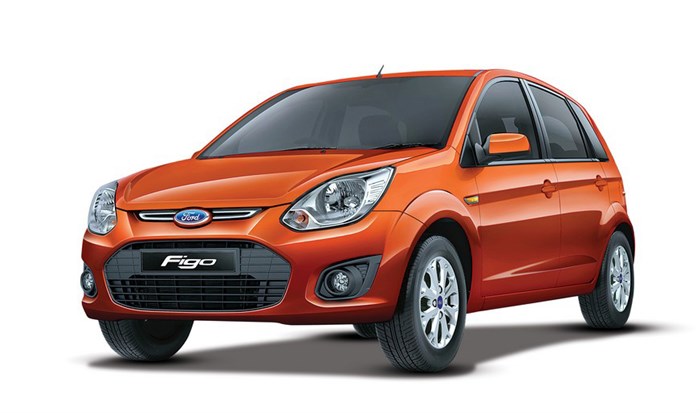 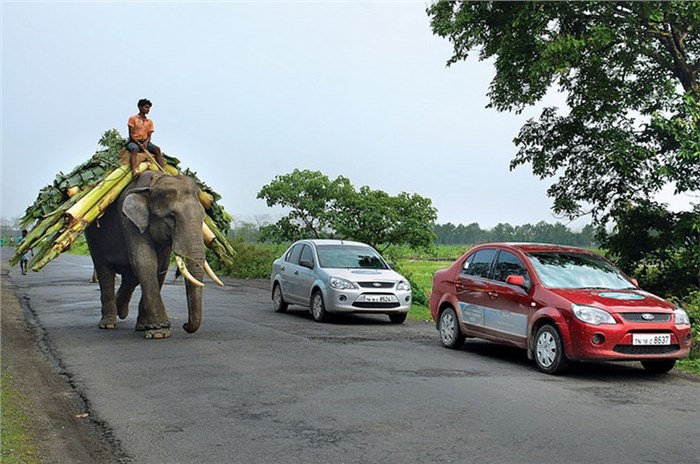 As Ford sales cross a million cars in India, we take a closer look at the cars that have captured the imagination of both enthusiasts and commuters.

Ask any auto enthusiast to list their fun-to-drive, made-in- India cars, and you are sure to find a Ford in the list. Fun-to- drive seems to be at the core of every Ford car. It’s a quality that was apparent in the first-ever Ford that was made for India, in India.

Today, Ford has sold one million cars in India. So let’s see what makes Ford cars so special and endearing.

When the country was obsessed with small cars, Ford gave us the iconic Ford Ikon – a car not many can forget – which was dubbed the ‘Josh Machine’, or the Fiesta that made you ‘Go Fida’. Even today, enthusiasts pride themselves on having owned one of these or still having them in their garage. Both these iconic products had something that is infused in every Ford even today – they are fun to drive. 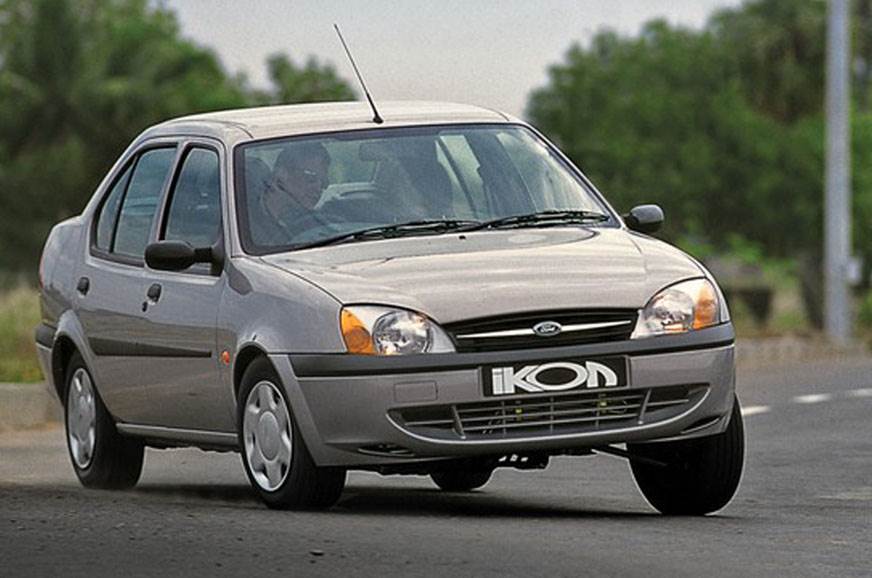 Ford cars feel like they’re made by people who love cars, for people who love cars. Every Ford has the suspension that is just the right balance between soft and stiff to deliver a sporty experience, a steering that speaks to the driver, and the engine, of course, that plays a major role in delivering ample power and putting it down in a manner that feels and sounds exciting.

Yes, over the years, Ford has given us a line of powerful petrol and diesel motors – notably, the 1.0-litre, three-cylinder turbocharged, direct-injection EcoBoost petrol engine and the legendary 5.0-litre Ti-VCT V8 in the Ford Mustang. Every car Ford makes conveys the enthusiasm of the makers as soon as one gets behind the wheel to experience the 'fun to drive' DNA.

As we know that it’s not just the ‘fun to drive’ aspect of Ford cars that have earned it a million customers; they are extremely practical too. We remember the 1.4-litre Duratorq TDCi Fiesta, a favourite of enthusiasts, gaining entry into the Limca Book of Records in 2006 for travelling a distance of 1,570.8km on a single tank of fuel. Similarly, in 2011, two Ford Fiestas took off on a Cross Country Drive to circumnavigate the country on a real-world test, and after clocking a torturous 20,788km, the 1.4-litre Duratorq diesel Fiesta averaged an astounding 32.38kpl. Remember, this was on actual roads and not under ideal test conditions. More recently, the Ford Figo was the most-awarded small car in India and found a place in the Limca Book of Records in 2012. 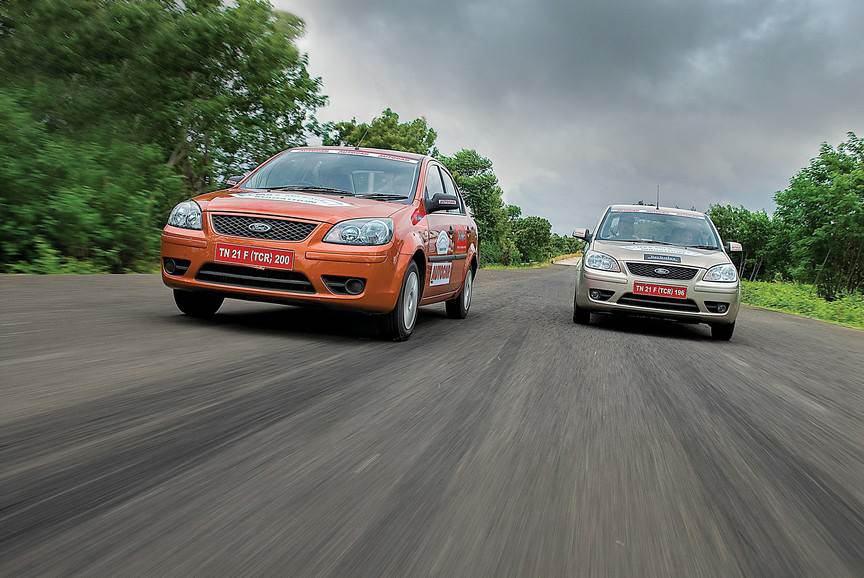 No wonder the demand for Ford cars just kept going up. And it was not just in the market that Ford was winning. When the EcoSport was launched it was crowned the Car of the Year 2014. As the judges rightfully said, "Ford has also packed the EcoSport to the gills with equipment, with several first-in-class features".

‘First in class’ has gone on to become another Ford signature. The first company to provide Bluetooth – in the Ford Figo; to make safety reach masses by being the first to provide six airbags, and the SYNC touchscreen – Ford has been at the forefront of setting technologies and safety benchmarks to India. Not to forget: Ford is also the first to transparently share its service and parts cost online with the Service Price Promise.

Since the Ford Ikon's launch in 1999, Ford cars have grown and evolved. While today’s Fords are much more technologically advanced with an array of computers and sensors aiding you, the essence of the cars remains the same.

With one million customers in the family, Ford has its eyes set on the next, thanks to the current portfolio of cars ruling the hearts and minds of customers in India. Let’s take a look at the Ford cars that are on sale now and see how the cars have changed and stayed the same.

When the Ford Figo was launched in 2010, the words associated with hatchbacks were practical, sensible and safe. So when Ford sat down to design its first Indian hatchback, it couldn’t forget these attributes – but then Ford couldn’t ignore its genetic makeup either. The result was the Ford Figo. With over 3,00,000 cars on Indian roads, the Figo has ensured that everyday commuting didn’t have to be tedious and boring. Traffic is soul-sucking, but the Figo added a dose of fun every time you saw a little open space around you. 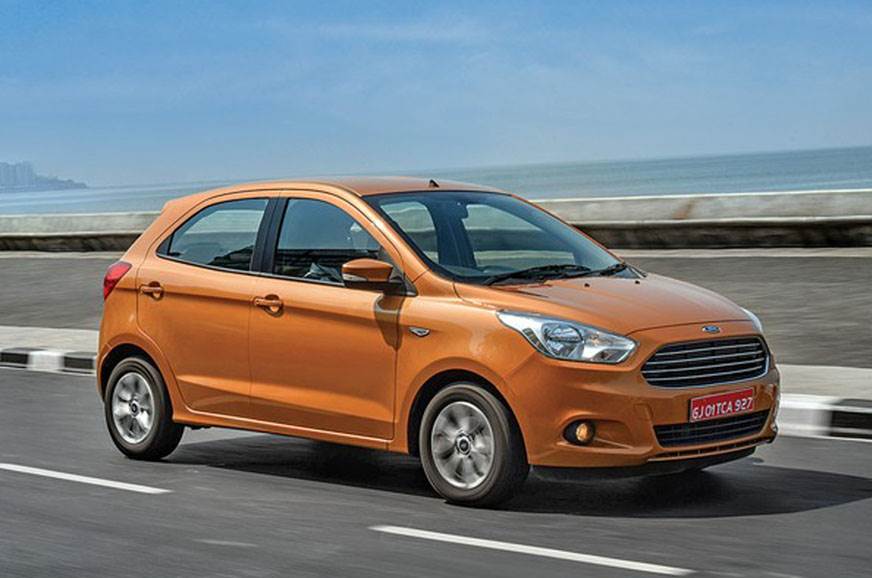 Practical, sensible, safe and a hoot to drive.

It didn't just bring fun to the segment, it also upped the quotients of practicality, economy and safety. The Figo’s unique combination of talent and features won it the Car of the Year 2011. And from then, things only got better. Afterthe success of the Figo, Ford threw its hat into the ring of another very competitive segment – compact sedans. This segment is frequented by people who want to play safe. When Ford introduced the Aspire in the market, it turned the idea of playing safe right on its head. Here was a compact sedan that you could buy with six airbags! This was the new gold standard. Top quality and meticulous attention to detail, along with a bag full of safety features, put it in a class of its own. Of course, none of this dampened the driving experience. It had the same thrill as other Fords for the enthusiast behind the wheel. The Aspire was a thriller, but a family thriller. 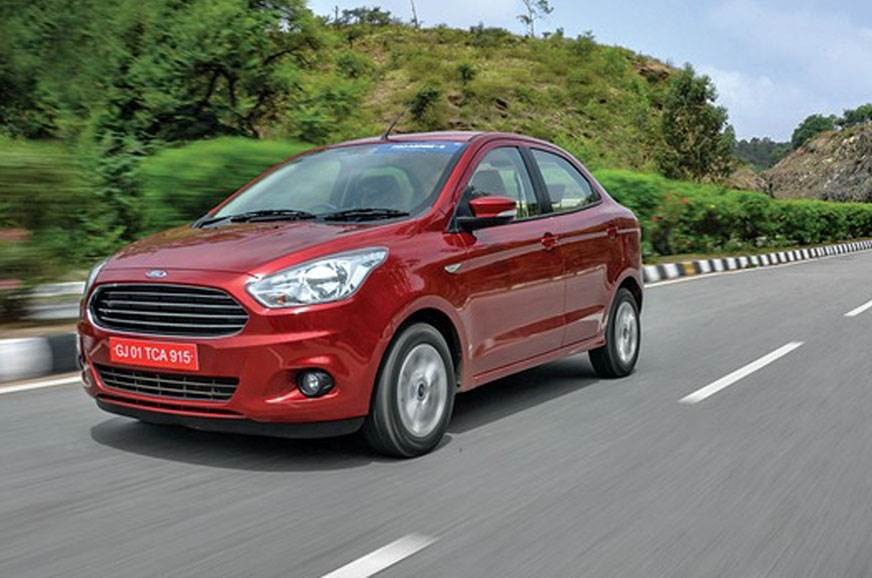 The Aspire is a thriller, a family thriller.

The car that best exemplifies the spirit of Ford is the Mustang. The right-hand version of this pony car landed on our shores in 2016. You didn’t need a racetrack to enjoy the Mustang. This was a car you could use every day on city streets. When you pushed the starter button, it let out a raspy burble that was almost all bass, as all 401hp was unleashed from the massive 5.0-litre V8. When you stepped on the accelerator, the car squat onto its haunches and you got a fast, hard pull from the engine, right from standstill, all the way to 6,500rpm. The fantastic steering made the car dance through corners. The Mustang is a car that makes every drive special. 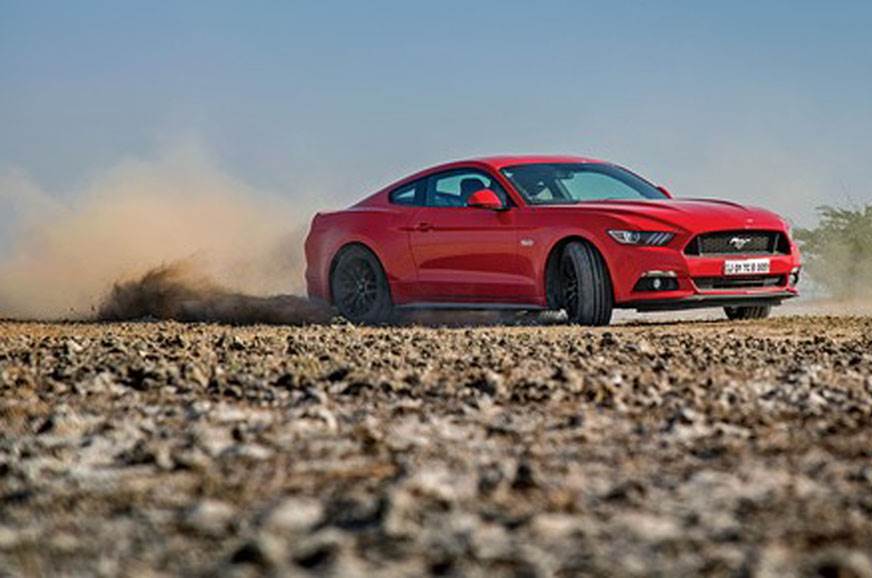 The car for special moments such as this.

ON ROAD, AND OFF

Different people want different things. It’s difficult to design one car that will satisfy both the Timberland and the Gucci wearer, but with their Utility Vehicle portfolio, Ford has managed to tick many boxes. Take, for example, the Ford EcoSport. Launched in 2012, the EcoSport soon became a crowd favourite through the sheer breadth of its talents. And it continues to impress even more as the latest avatar of the EcoSport gets the new 123hp Dragon motor, which sets the standard in refinement, power and economy. If you still want the fantastic EcoBoost motor, there is the EcoSport S. In the cabin, all the controls and touchpoints operate with an expensive-feeling crispness. The EcoSport also gets a sunroof and the latest SYNC 3 interface that is one of the slickest at this price range. And the worst road conditions don’t faze it. A Ford would not be a Ford if it wasn’t fun to drive, and the EcoSport continues that tradition. 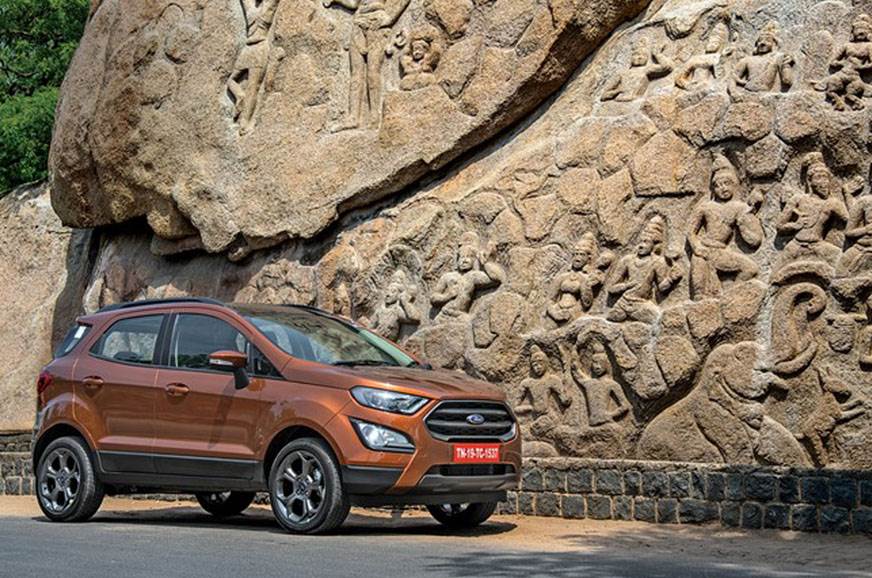 One car that will satisfy both the Timberland and the Gucci wearer.

For an enjoyable drive, all you need is a great car and a great road. Much of our driving pleasure is marred because of rough and broken roads. And that seems to be the raison d'être of the Ford Freestyle. The Freestyle is the first model to be offered with Ford’s new 1.2-litre, naturally aspirated, threecylinder Ti-VCT engine. This 96hp motor is the most powerful among the other naturally aspirated 1.2-litre petrol engines on sale in India. It’s light, crisp and is coupled to a well-weighted clutch. Petrol or diesel, the Freestyle impresses with its ride quality. With its SUV-like 190mm ride height, wide tracks and bespoke electric power steering tuning, the Freestyle feels made for bad roads and shines on twisty ones. It turns into corner after corner with great poise and agility thanks to a segment-first Active Rollover Prevention. Not long ago, ace rally driver, Gaurav Gill, drove a Figo through the serpentine bends of Kolli Hills in Tamil Nadu and gave the car a big thumbs up for the fun he had. The Figo also gets most of the goodies you’d want, and, for some, the safety kit alone will be the big draw. If you like to drive, this is the crosshatch for you. 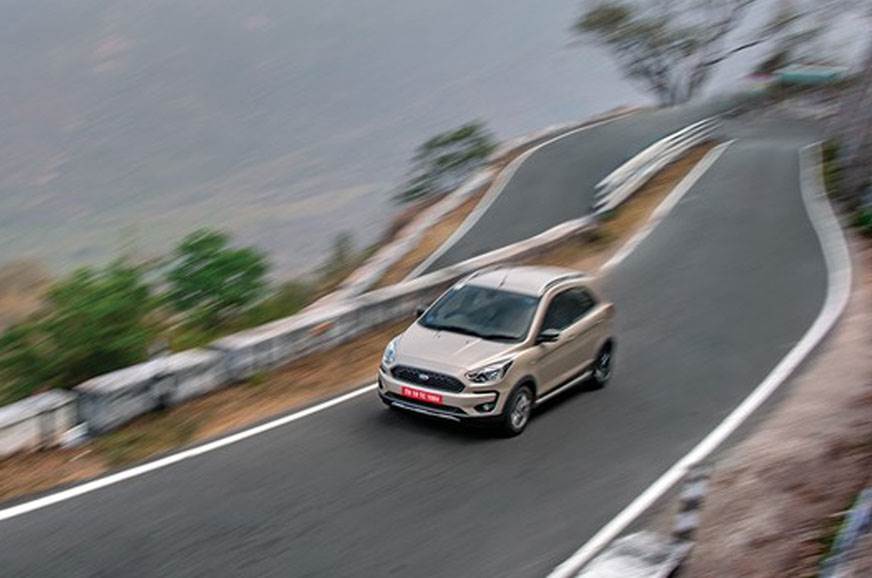 If you like to drive, this is the cross-hatch for you.

And for those looking for real off-roading adventure, Ford has the mighty, trustworthy and the extraordinary – Endeavour. While the EcoSport and Freestyle let you overcome daily challenges, in the Endeavour you get a hardcore SUV that is phenomenal off the road and is also just as exceptional in the city. Everyone gives way to an Endeavour. The latest-generation Endeavour has a more spacious, luxurious cabin that's been made more comfortable with features like the Active Noise Cancellation system. And if you want to make your own road, the Terrain Management System lets you toggle between Normal, Mud, Snow, Sand and Rock. Despite being a full-size SUV, it’s very agile. So, if you’re concerned that this big SUV won’t do well in city traffic, think again. The way it moves will blow you away. After all, don’t forget which family the Endeavour comes from — Ford, cars for car-lovers. 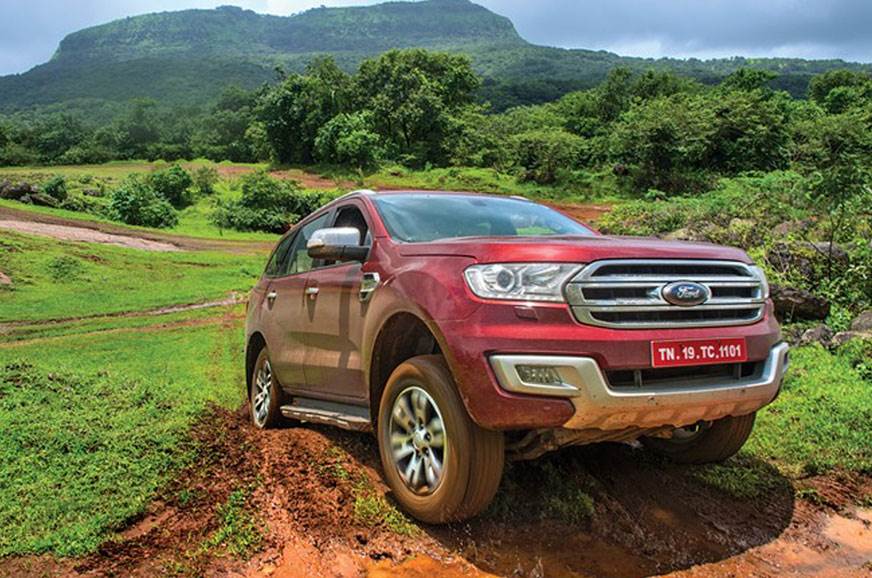 An SUV that offers a great experience on the road and off it.

...AND HERE'S TO THE NEXT MILLION

Thanks to its fun-to-drive DNA, transparent Online Service and Parts Calculator, and 'Make in India' commitment, Ford seems all set to make the next million customers 'Feel like Family'.