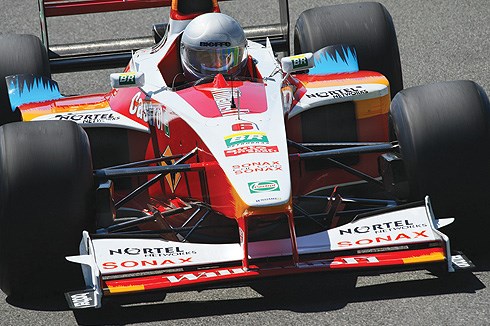 What’s better than getting the chance to drive an F1 car? Two F1 cars. On the same day! Hormazd Sorabjee gets an F1 overdose at Magny Cours.

It was with a sense of déjà vu that I wiggled my distinctly non-F1 frame into the tight confines of the carbon fibre tub and with knees pinned together by the narrow bulkhead, stretched my legs to probe the pedals. This was an environment I had experienced just once before, seven years ago, but it was enough to bring back vivid images of my first tryst with a Formula 1 car in France. Making that experience even more unforgettable (for the wrong reasons) was the infamous date. I flew out from India on the night of September 11, 2001, the day the Twin Towers were bombed. Since 9/11 the world has changed. Governments have toppled, Schumacher’s gone and Tata has bought Jaguar-Land Rover. I’ve become more grey and slightly heavier (a plan to shed 5kg for this day didn’t work out). But a lot of things haven’t changed. I am back in France along with Gautam Singhania, a good friend and partner in crime for all mad things automotive, to relive those special moments in what, for us, is the ultimate machine on four wheels.

The key difference between this time’s F1 drive and my last one was the state of preparedness. The first time around, I had absolutely no idea what to expect from an 800bhp car that weighed much less than a Maruti 800, especially since the last car I drove before getting into the F1 car was my long-term Zen. After the long 747 flight, it felt like being strapped to the Chandrayaan I during lift-off.[BODYAD]

Gautam has been taking this drive pretty seriously. Like me, he knows the physical pounding you get in an F1 cockpit but unlike me he’s done something about it. Like many hours in the gym to prepare himself for those intestine-wrenching g-forces. Besides, Gautam is pretty used to the ferocious accelerative forces of a sub-three-second car. His 700bhp Skyline dragster hits 100kph in 2.6 seconds and his latest acquisition, an Ariel Atom can hit the ton in a shade over three. But more of these cars in a later issue.

We are at Magny Cours, the same circuit where only a few months ago, Felipe Massa beat Kimi Raikkonen and now here we are standing in the pitlane with the eerily empty grandstands in front of us eagerly waiting to be strapped into either of the two F1 cars in the pitlane.

Wildside, which arranges the ‘Drive F1’ programme, had at our disposal a Williams FW21 which was piloted by Ralf Schumacher and Alex Zanardi in the 1999 season and a Benetton B198 in which current Force India driver Giancarlo Fisichella picked up a pole and a podium in the 1998 season. These cars were originally powered by a Supertec V10 but Wildside has adapted them to take a V10 Peugeot and a Cosworth HB engine. Though these decade-old cars would feel like something from the stone-age in today’s hyper-paced world of F1, their performance is not too dissimilar to today’s F1 cars. You don’t need a calculator to figure out that an 800bhp engine bolted into a 600kg chassis would give a power-to-weight ratio of 1333bhp per tonne; that’s 2.5 times more than the Bugatti Veyron, the world’s fastest road car.

Though we had driven cars with such potency before, the Wildside instructors weren’t just going to strap us into something that’s capable of blasting to 100kph in
2.5 seconds, 160 in less than five and hitting near 300kph on the long straight and keep their fingers crossed. A better part of the day went in theory lessons, sitting passenger in a minivan to learn the track and building up confidence in an F3 car before the climax in the F1 car.
Magny Cours is a pretty technical circuit with some tricky corners that have many ideal lines. The several gradient changes make it difficult to see through all the corners, especially at the speeds these cars are capable of. There’s a nice long straight which I am looking forward to which Wildside has left unfettered with no speed limiters.

Theory over, it’s time to get behind the wheel. I go through the ritual of donning the race gear that’s essential when you drive an open single-seater. Thankfully I didn’t have to lug a racing suit, helmet and boots from India to Magny Cours as Wildside provides all the kit. I hunt for XL-sized overalls and remember to choose boots which are one size small. It’s a good way to shrink your feet to slip them into the tiny pedal box.

The F3 may have had only a 200bhp engine but with a close-ratio sequential, six-speed ’box and weighing a scant 400kg, it felt really quick. The first few laps were spent memorising the circuit, which looks quite different when you’re sitting just a few inches above it.
The F3 Martini had all the sensations of a racing car. Terrific grip, brilliant brakes, super responsive steering and supercar-busting acceleration. It helped build up my confidence, maybe too much of it (I indulged in a 180-degree spin on Turn 8, a tricky left- hander). But none of this could prepare me for the different world that was waiting for me out there. Walking up to the Williams waiting for me in the pitlane, I realise just how big an F1 car is, especially after the F3. Surprisingly, the cockpit isn’t. You need a certain athletic ability to simply get in and out. The way Messrs Hamilton and Massa leap out of their cars makes it look easy but believe me with a 36-inch waist, it isn’t. Now the drill to start the car is quite straightforward. Ignition on? Check. Foot off the throttle? Check. The pneumatic starter is shoved into the V10 and it bursts into life. Even at a 4000rpm idle, the sound of the V10 just inches behind your ears is exhilarating. Strapped in tight by the six-point harness, I can feel my heart beating against the straps. I’m given the signal. Revs raised to 6000rpm, I pull the right paddle to engage second gear (first is blanked off). My foot is beginning to ache against the incredibly hard clutch which I slowly ease out. The clutch, in these cars, has no slip,no travel and is like an on-off switch but I’m determined not to stall it. I feel it bite and let the last millimetre out a bit too quickly. The FW21 lurches forward and stalls. It all goes embarrassingly quiet and the drill has to start all over again. I am told that the FW21 has a brand new clutch which makes it particularly tricky to launch and decide to take the easy way out, which is with a good, old-fashioned push start!

Exiting the pitlane, I squeeze my right foot but only a bit, there’s the fast and long Estoril corner which I approach for the first time and carefully cruise through. When I see the track straighten out, I nail it. The acceleration is so violent it feels like you’ve been shot out of a cannon. The brutal way in which the car rockets forward makes it difficult to hold your head straight.

The last 4000rpm to the 13,000 rev limit is incredible and in this band the kick is even more intense. There’s no let up in any gear. Third, fourth, fifth, sixth, each gearshift gives a neck-snapping lurch and I must be on the wrong side of 260kph as I approach the Adelaide hairpin. The buffeting of the wind blurs my vision but I can clearly see that Armco barrier looming rapidly. The carbon brakes don’t offer much feel so it’s difficult to brake progressively. I simply stomp on the centre pedal as hard as I can and the way speed is scrubbed off is shattering. My kidneys feel like they could fly out of my suit and my chin hits my chest. When I look up, we haven’t even reached the corner!

I get back on the throttle before braking again. The astonishing braking of an F1 car is something that your brain just can’t come to terms with. Your head is screaming ‘Stop!’ but you can stay on the throttle for another two seconds and still manage to slow down for the next corner. And then there’s the grip and immense g-forces that pummel your neck. Driving the FW21 was quite easy actually, the hard part was being able to hold
my head up through fast corners; around Estoril it felt like an elephant was sitting on the side of my helmet.

With each successive lap my confidence increased and though Wildside doesn’t allow timed laps (for obvious reasons) I could feel myself improve and by the end of my first five-lap stint I was braking that much later, getting on the power earlier and carrying more speed through the corners. I was having an absolute blast, even if it meant just scratching the surface of the FW21’s potential.

I switched to the Benetton B198, which thankfully had a softer clutch so I didn’t stall it. The acceleration felt just as ferocious as the Williams and the braking and grip were equally outstanding. If there was a difference, I just couldn’t tell. For my last five laps I was back in the Williams and by now was digging deeper into the car’s phenomenal capability. Tiny kinks which saw me back off could be taken flat out and I was attacking the kerbs more aggressively. But by even half-baked F1 standards I was a joke. Corners that can be taken absolutely flat out, like the quick left-hander after the straight, I was braking for and downshifting. And though I thought I was going at an insane pace, the on-board video footage of my drive looked like I was driving with the speed-limiter on. Gautam did an extra 10 laps and I watched him improve with every lap to get up to a pretty respectable clip. True, you acclimatise quickly to the sheer speed these cars are capable of but only up to a point, which in my estimate is at least 20 seconds off the pace. To put it in perspective, if a genie granted me a wish and put me on the grid (on pole, please) the whole field (including the Force Indias!) would pass me in just four laps!
Yes, F1 drivers do come from another planet.