The GTC4Lusso T, Ferrari’s four-seat sportscar, will soon be replaced. We find a shortcut to some great driving roads and bids farewell to what could be the last of its breed. 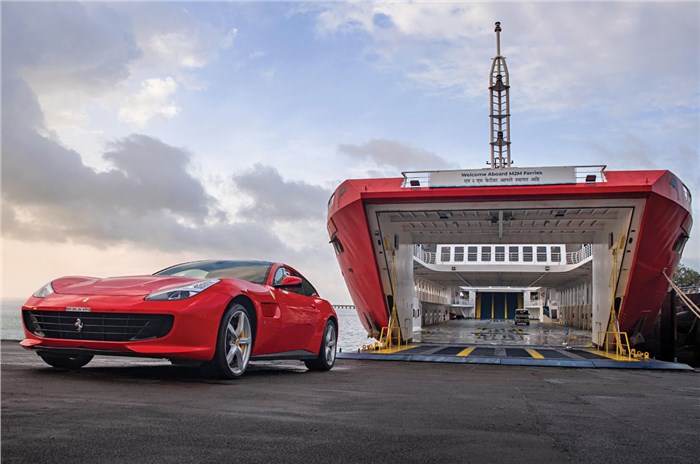 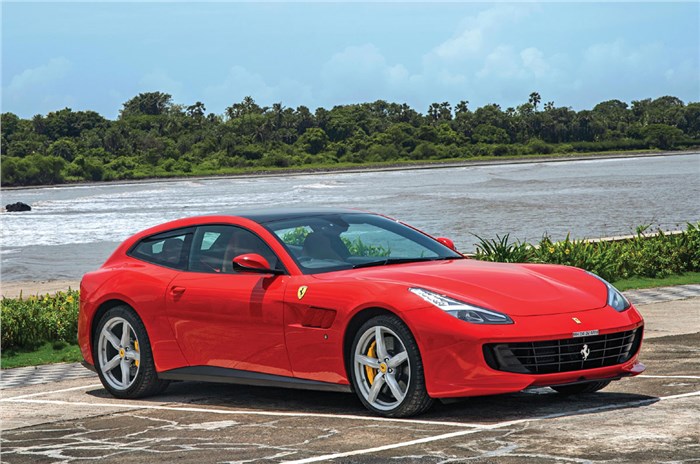 The proportions don’t help, but it looks fetching from some angles. The M2M Roll-On, Roll-Off ferry can be sailed in both directions; forward and back. 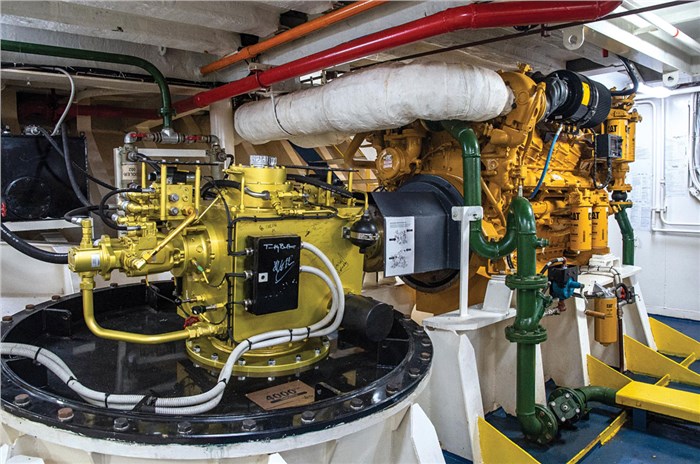 The Ferrari may have a V8, but the CAT diesel engines here are all V12s.

The long, red nose of the Lusso descends gracefully off the elevated Eastern Freeway. The early exit takes us straight to the underbelly of Mumbai. Though only a few kilometres from the centre of ‘town’, we couldn’t be further from the heart of tony Bombay. Ahead, and around us, are row upon row of trucks, all lined up to get into the port, and then, as we stop and ask for directions, all we get are bemused and blank looks. Even the local chaiwalla, normally on point when it comes to local info, looks at us like we are suspected aliens. We finally resort to using Google Maps, and sure enough, M2M Ferries pops right up. “In 600 metres, take a right,” says the nice lady. Should have asked ‘Google Baba’ in the first place.

Once on the dock, things improve dramatically. Mumbai’s new Ro-Pax terminal isn’t exactly Terminal 2 or five-star slick, but the roads are well paved, there are fresh lane markings and even the lamp posts seem to be new and in service. Then, as we round the corner, the impressive M2M ferry looms into view. It’s just huge. The plan is pretty simple; use the Ferry to leapfrog across the harbour to some good  driving roads. The journey from the island of Mumbai to the mainland across takes approximately an hour, as against driving around, which takes two. But it isn’t just the time saved. What we are more keen on avoiding are the toll plazas, random speed humps, congestion, and of course, having to drive in slow-moving traffic. 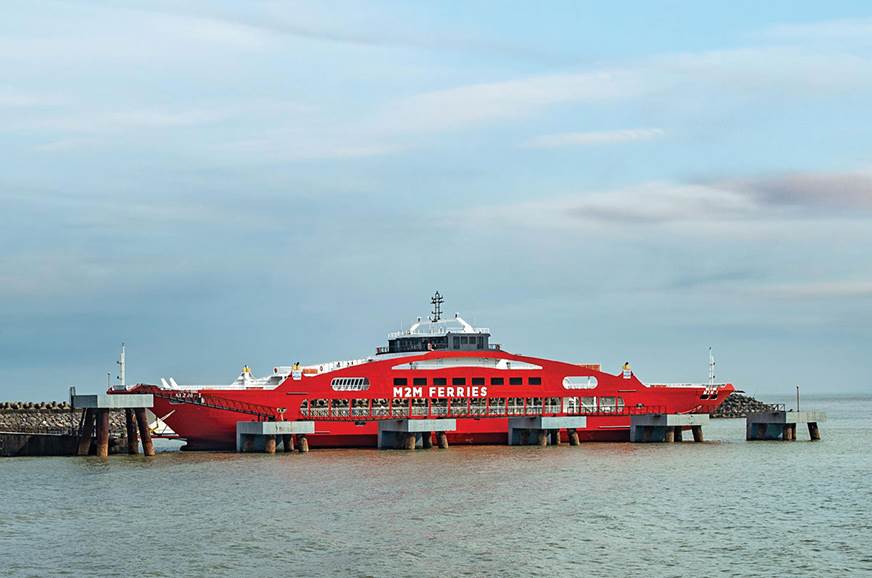 The first step across the harbour, however, is difficult. It involves clambering up a steepish ramp from the dock to the jetty. The rubberised wedge we have to drive over causes us some stress, and we get off to examine the approach and departure angles. Luckily, the Ferrari has a nose-lift feature, so I raise the front and gingerly edge forward, and to my surprise, it clears easily. Angling the car also helps gives us a better ramp-over. 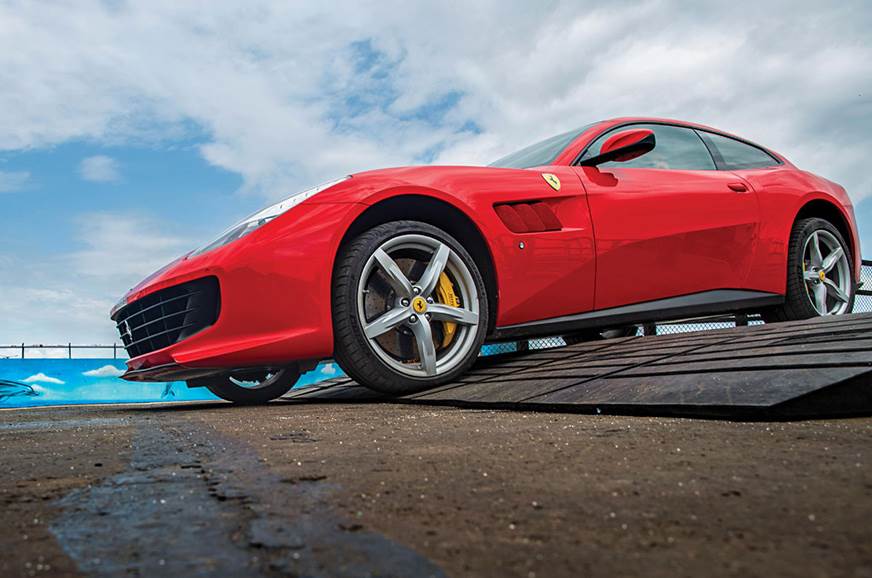 Despite the three-metre wheelbase, you can raise the nose and clear anything.

The climb up from the jetty to the M2M ferry (Mumbai to Mandwa, incidentally) is an easier one, and the Lusso hops on board easily. The boat has fasteners on the floor if you need to secure the car, but the stability of this Greek-built ferry is so good, it is rated for long sea voyages and rough seas. In fact, M2M1 – this boat – was sailed all the way from Greece where it was made; 95 metres long and 18 metres wide, the 700-tonne ship can take 145 cars, between its main deck and hidden lower deck. 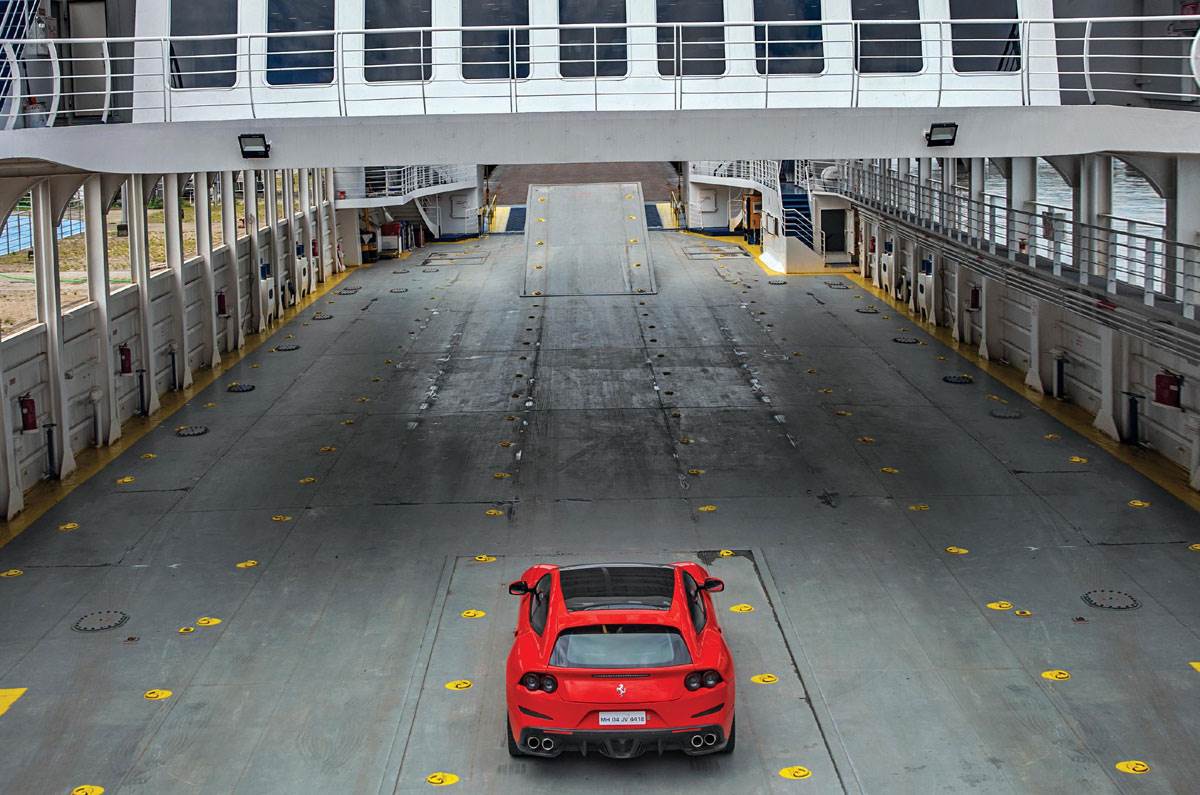 Featuring a symmetrical design, where both its sides open to give easy access, the ship, much like a railway engine, can move in both directions. This is possible because it has four individual engines and four propellers (one at each end) that can swivel 360 degrees and deliver drive in any direction. Each of the four Cat V12 diesel engines puts out approximately 660hp, and should the captain want, he can do a pirouette and spin the boat around its own axis. Even the bridge on this boat is unique. There are control panels both on the right and the left, and when the boat changes direction, the crew go from pointing in one direction to the other. 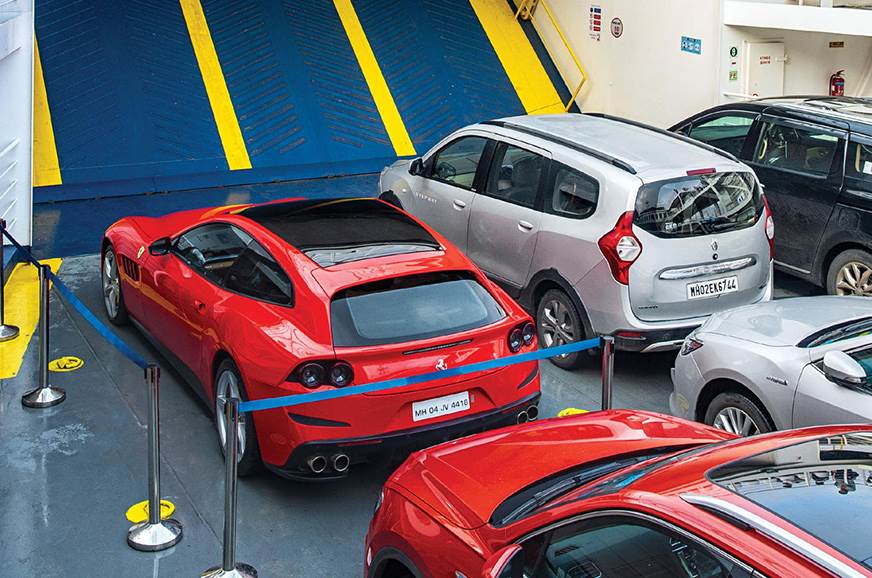 Don’t forget to engage the parking brake, especially during the monsoons.

While a top speed of 12 or 15 Knots doesn’t sound very fast, we are soon on our way, enjoying vistas of the city of Mumbai, as we sail south and east. This really does feel special. Instead of battling traffic, we are enjoying a visually arresting cruise. And, as ever, the sea breeze on our way across Mumbai’s harbour is invigorating. 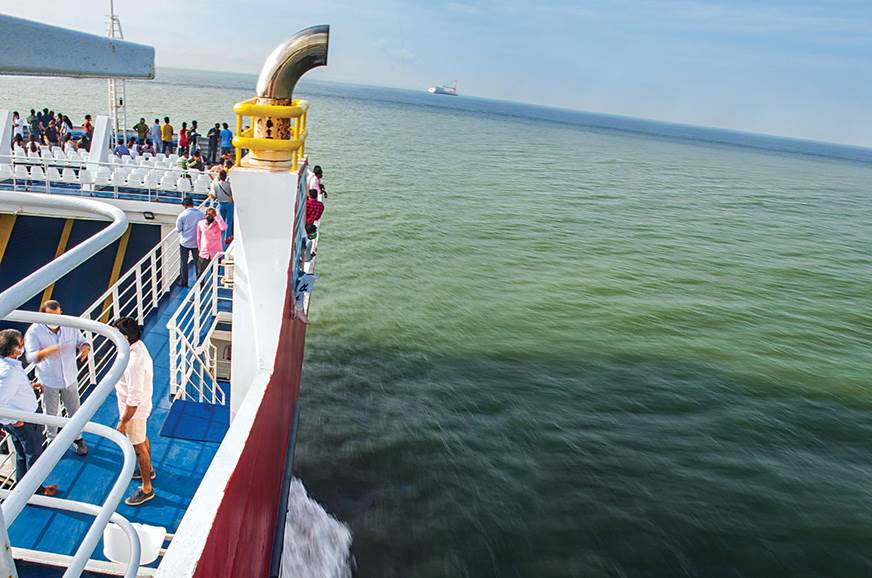 As the mainland and jetty of Mandwa at the other end approach, we get some rollers that toss the boat around a bit, but we are soon up and over these. Before we know it, it’s time to get off, all within an hour.

Back in the Lusso, I raise the nose and get ready to crawl off. The ramps on the Mandwa side, however, are much smoother, and with no big step up or step down, we are on dry land again in minutes. This feels like magic. Ahead of us, no concrete jungle, no toll plazas, no traffic; just loads and loads of green, and some good driving roads. There are a couple of rough patches as we exit the parking lot that I have to navigate around, but we soon get onto some deliciously long and smooth straights, many of them covered by a green canopy.

The Lusso, or the GTC4Lusso T as it is officially called, has been dead easy to drive all this time. Despite the engine being highly strung and capable of a seriously strong 610hp, it’s been a real pussycat at low speeds. Throttle modulation has been easy, the gearbox isn’t jerky, and in Comfort, it even rides over bumps reasonably well. There is a bit of an edge to the ride, and when I flick the very usable ‘Manettino’ to Sport, it becomes a bit harder. But the ride is also clearly flatter in Sport, and if you want to drive quickly, it feels like the more natural setting.

In fact, flick the switch and everything just tightens up; not just the suspension, but the steering, the gearbox, and throttle responses. And then when I plant my right foot, even gingerly, the Lusso responds instantly with a whoop, a howl, and an instant burst of acceleration. Ferrari’s V8 uses a pair of twin-scroll turbos for quick responses, and this initial urge feels truly spectacular. After a few tentative runs, which feel insanely quick in isolation, I finally have the space to formally introduce the drilled aluminium pedal to the carpet. And then the ferocity of the acceleration really does take me by surprise. 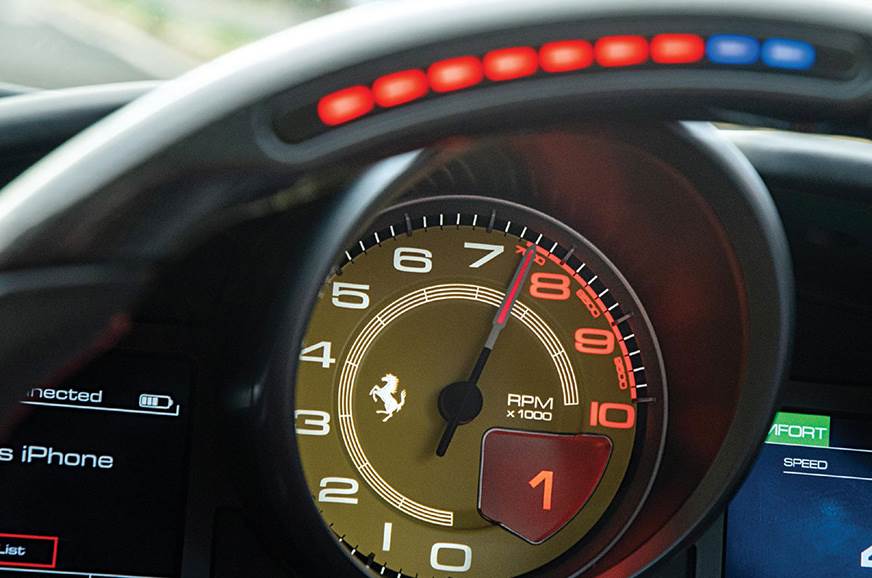 Shift lights on steering wheel only add to the drama

The outside blurs into a green tunnel, the engine sounds even angrier in Sport and responses are so crisp and delicious, I can’t resist harder and longer pulls. The Lusso is a big, long four-seater, but by golly is it quick. The 0-200kph time stands at 10.8sec! This car feels twice as fast as it looks. Wish the engine didn’t have to stop spinning at 7,500rpm though; it’s so smooth, another 2,000rpm would have been easy.

A whole bunch of thrilling long stretches later, we come upon a village. Now the near-three-metre-long wheelbase has me worried again, and the 20-inch wheels need special attention too. The Lusso, however, takes everything in its stride – speed breakers, markets, railway crossings, everything. And I only use the lift function once. 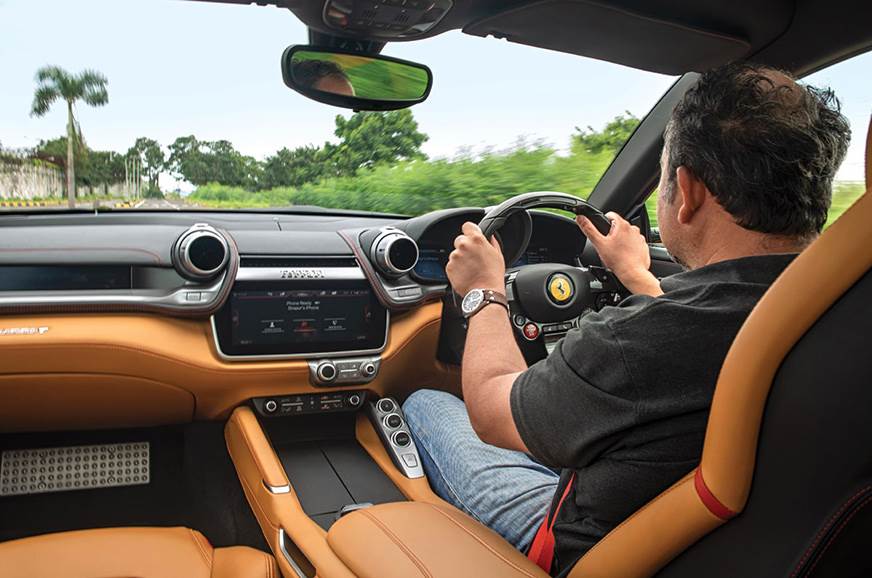 The GTC4Lusso T’s powertrain is incredibly responsive and 610hp really does go a long, long way.

Up ahead are some ghats. Fingers crossed there won’t be much traffic. En route, I marvel at just how comfortable I am in the cabin. The driving position isn’t supercar prone. A bit more upright and higher off the ground, visibility is better, the steering, with its oval grip, feels special to hold, and what I also love are the paddles. Perfectly placed, they click through with weapon-like precision, and the organic shape of the dash really does work here. Love the placement and treatment of the frameless touchscreen, and those rear seats work pretty well too, even if you are tall.

Then there’s the other thing about this Ferrari: it even feels fabulous to drive a couple of notches down from flat out. The sweet turn in, the accuracy of the steering, the urge from the engine; this certainly isn’t your everyday two-dimensional, all-or-nothing supercar. 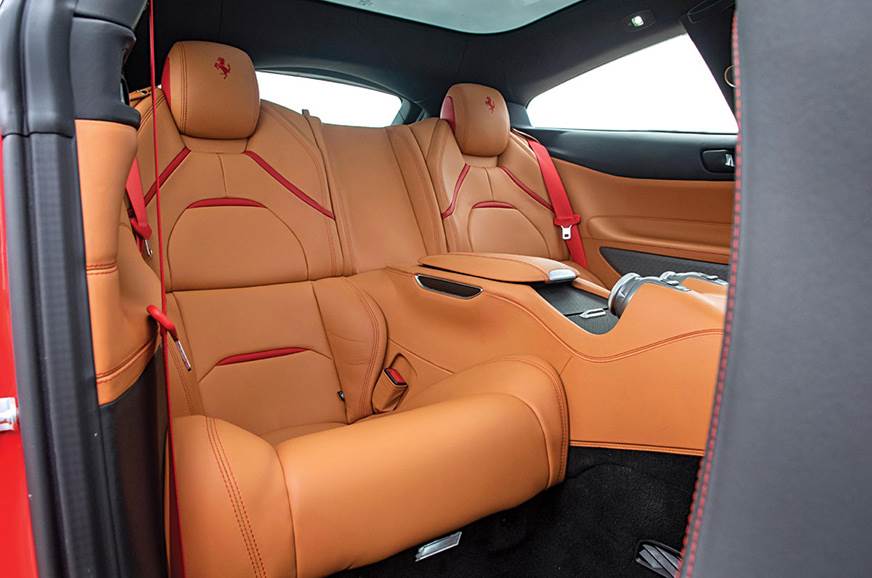 Rear seats are snug, but you are surrounded by quality

We turn right finally, past another market, and onto the ghat, and immediately the Lusso feels right at home. Now this isn’t a four-laner and there isn’t too much space, but far from this big barge going “Oh-no, small road,” it’s screams “Yeah baaaaby! Go for it!”

The engine is pushed so far back in the bonnet and weight is so neatly tucked in within the wheelbase, it feels extremely agile. And then what adds to the agility is the rear-wheel steering. You can literally chuck it into corners, and it just goes where you point it. And with 610 horses going through the rear wheels and that explosive mid-range, the ghat is just a thrilling ride. 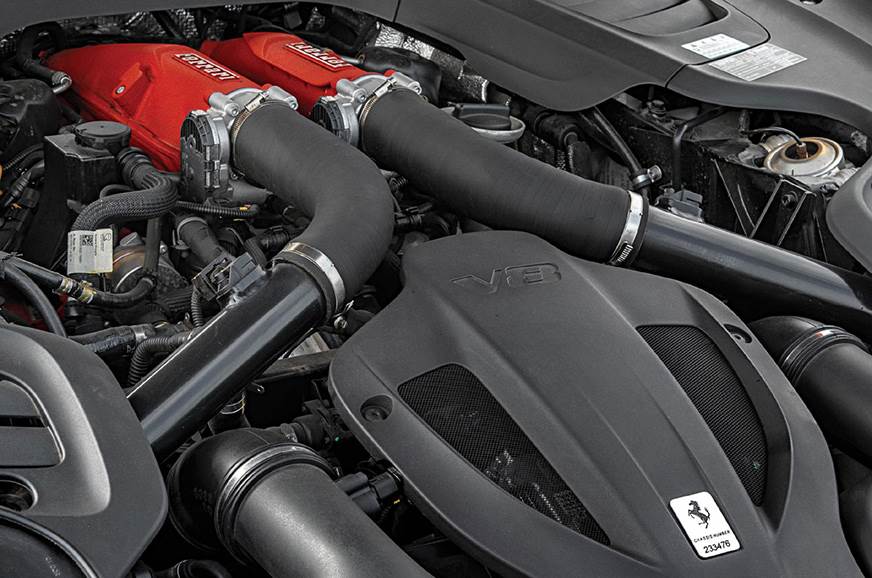 Twin-turbo V8 nestled far back under the long bonnet.

Even the operatic exhaust sounds super, bouncing off the mountain walls. Yes, the engine is the same as in the mid-engined Ferraris, but this one, with its longer straight pipes, sounds that little bit nicer.

With the rear-wheel steer flicking this way and that, the backside does get quite loose in Sport, and that only ups the excitement. But the Lusso also sounds out a warning; it’s unlikely to be as easy, progressive or user friendly after that, especially with all the mass flying around. Photographers and camera men, as ever, need plenty of shots, so I have to drive up and down the ghat repeatedly. And that’s just fine. Soon it’s time to return to the jetty, and we mark time and make our way back. Must say the Lusso T delivered much more Ferrari than expected, and what it lacked it visual drama and Vitruvian proportions, it more than made up for in dynamic performance. Incidentally, production of the GTC4Lusso has recently come to an end, and while the unconventional looks may not be missed, it will be replaced by the upcoming Ferrari SUV (FUV?). So this is likely to be the last four-seater sportscar from Ferrari, at least for now. AI

A big thank you to Navnit Motors-Ferrari Mumbai for providing us with the GTC4Lusso T.