The Renault Kwid has completed a year in India. We analyse what’s worked in its favour. 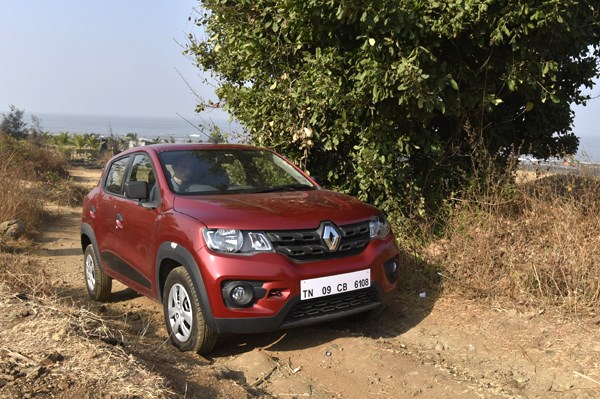 Since its launch in September 2015, the small Renault Kwid has made a big impact in India. The increasing density of Kwids on our roads is proof enough. The Kwid ended its first year in the Indian market with record sales of 10,719 units in August and cumulative sales of 1,07,033 units until October. The car has caught on like few others in what is a hard segment to crack, and Renault has proven that its small car is no flash in the pan.

Thanks to the Kwid’s roaring success, Renault looks set to cross the five percent market share in India within this year; a target the French carmaker had set itself to achieve in 2017. But that’s not all. Renault has set lofty targets for itself for the long term too. It aims to break into the top-three manufacturers by volume in India by 2023, said Bernard Cambier, Renault’s senior vice president and chairman of Africa, Middle-East, India region. He also stated that product life cycles will become shorter and the company is looking to aggressively launch multiple variants of the Kwid, along with new products.

In fact, the company has plans of launching a new variant of the Kwid every year. Such has been the impact of Renault’s small car that the country’s largest car manufacturer, Maruti, is now looking into what has made it a success. The Indian auto major’s top-selling Alto, for the first time, has seen serious competition from a rival.

Good design sells. And Renault did get the Kwid’s design right. The French carmaker needed a car that would easily distinguish itself from the staid Maruti Alto and the extroverted Hyundai Eon. The masterful decision to go for an SUV-inspired look did just that. Renault didn’t take the shortcut approach of taking an existing model and slapping on a few rugged bits. Rather, the Kwid was designed from the get-go to look like a scaled-down crossover or SUV. The Duster connection certainly helped here.

Elements like the raised bonnet, high ground clearance and squared-out bumpers give the Kwid a distinctive look and allowed the car to garner easy acceptance among the car-buying masses. It’s a car that has a certain level of desirability. Who said buying cheap meant buying boring?

The Kwid offers a host of equipment, quite unheard of in a car in this segment and at this price. It is the cheapest car on sale to come with a touchscreen, and that too one with Bluetooth and even navigation. The digital speedometer is another feature unique to the Kwid in the budget end of the market.

Other aspects on the inside such as the good quality of the steering wheel and the glossy black centre console have caught the attention of buyers. That said, the company has saved in areas less important to a buyer in this segment. For instance, the car comes with a single wiper and the wheels have only three locking nuts and cost-cutting is quite evident on close inspection.

Rather than toss in expensive ingredients that most Indian buyers won’t pay for, the car is built on a Renault’s highly affordable CMF-A platform developed specifically for emerging markets. With Renault-Nissan CEO Carlos Ghosn being a big admirer of Indian frugal engineering, the Kwid was born in Chennai and so was the platform. Project head Gerard Detourbet and most of his team were based in India as well.

The carmaker dipped into its Alliance resources from all over the world and used a mix of French, Japanese and Indian product engineers in the development of the car. In fact, with the Kwid, it is the first time ever that a carmaker has introduced a new car with a new engine and gearbox in
the country.

Renault says meeting the target price was possible only due to a high level of localisation. The Kwid started its innings in the country with 97 percent of its parts sourced locally. No other multinational auto maker, with the exception of Maruti Suzuki, has managed to achieve such a high level of local content. The Kwid sent shockwaves through the industry with an aggressive launch price of Rs 2.57 lakh (ex-showroom, Delhi). Since then, Renault has been successively raising the price, but as the sales figures show, there’s no sign of demand slowing down.

It just makes sense for India. A ground clearance of 180mm makes it easy to drive over the poor Indian roads that run across the country. The car also has good interior space and a 300 litres of boot space, which makes it attractive to first-time buyers, many of whom use this car for shopping trips and the outstation travel car. Both the ground clearance and the boot are more than its closest rivals, Maruti Alto K10 and Hyundai Eon.

On the engine front again, Renault chose to lean towards the side Indian buyer’s care more about. So the 800cc Kwid has a blunted performance, but is the most fuel-efficient car in its class with an ARAI-rated fuel economy of 25.12kpl. Impressively, the claimed fuel economy figure of 23.01kpl for the recently launched 1.0-litre Kwid is not too far away from the 800cc.

Developing a promising product is only half the job done in a dynamic automotive market like India. Implementing an infallible marketing strategy is as important. Company CEO and managing director Sumit Sawhney says it met the three key requirements for a successful launch – right time, price and product. Renault India’s marketing head Virat Khullar tells us, “We had to think differently (for Kwid to be a success). When we launched the Kwid, we were up against established players in the segment. The challenge was huge. Apart from traditional marketing, we were also looking to use digital as a strong reach medium.”

Interestingly, a few days prior to the launch, Renault introduced an app ( more on that below) as well as a virtual showroom to enable prospective buyers to explore the car. The company has received more than 21,600 bookings just through the app and the digital medium tops its campaign strategy. It has a target to achieve 15 percent leads from digital in the near term. Renault has also tied up with mobile payment platform Paytm to enable customers to book online or pay the booking amount at dealerships with their Paytm Wallets.

Renault has introduced a comprehensive app for the Kwid owners to access information about the car. Available for both, Android as well as iOS platforms, the app serves as an e-brochure where users can see interior and exterior pictures and videos of the hatchback.

They can also learn more about specifications, features, variants, colour options and importantly, compare those of the Kwid with other cars. To enable efficient comparison, Renault has included specs and pictures of the Hyundai Elite i20, Maruti Swift, Celerio and WagonR.

What’s more is that users can also book their Kwid via the app for Rs 5,000 and select their nearest dealer too. Renault says the move has worked well for them and the response to the application has been great; the app has received over 4,00,000 downloads since launch.