One's a fresh face; the other's a crowd favourite. Which one should you pick? 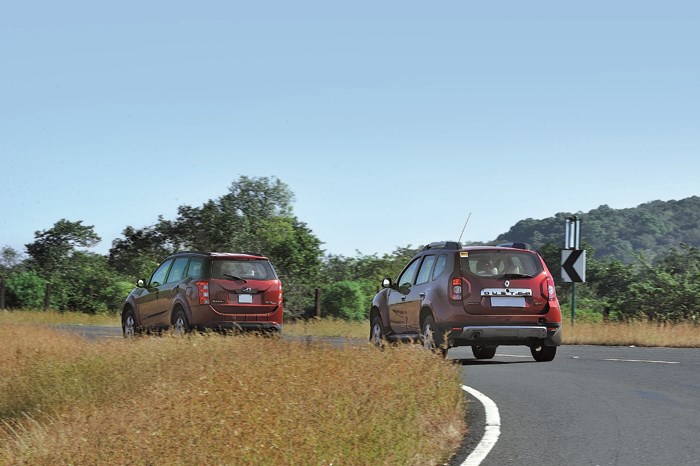 The SUV-crazy Indian automobile market has recently seen quite a few new entrants. And one of the most commonly-debated topics seems to be whether the Renault Duster or the Mahindra XUV500 makes for a better buy. Of course, there seem to be quite a few similarities between the cars. They are priced almost alike, even identical (at Rs 11.69 lakh, ex-showroom Delhi) as in the case of the base front-wheel-drive XUV500 W6 and the top-spec Duster 110 RxZ (with Option Pack). Both the SUVs use monocoque construction and even have similar power-to-weight ratio. But that’s it with the similarities. While the Duster is clearly smaller and is easier to manoeuvre in the city, the larger XUV has the advantage of seven seating.

To help you make the correct choice, we took both these beasts through the rigours of heavy Mumbai traffic, the concrete expanses of the Mumbai-Pune expressway and even the scenic Maharashtra countryside. Which one comes out on top? Read on to find out.

Both the SUVs look the part of a rugged off-roader, capable of negotiating any undulation thrown in their way. Although the Duster is smaller than the Mahindra, that does not diminish the Renault’s stature by any means. The squared-out front, big wheel arches and those thick D-pillars lend confidence to the Duster’s stance and make it seem larger than the dimensions suggest. The chrome-rich grille gives it a touch of flash but the simple detailing everywhere else fits in perfectly with the Duster’s understated character. However, Renault really could have done a better job with the flimsy door handles and the sound with which the doors shut is not becoming of an SUV of this standard.

The XUV, on the other hand, has ‘cheetah paw-inspired’ flap-type door handles that are one among the many distinctive bits on the Mahindra SUV. Although the XUV is a smart and well-proportioned SUV, we feel, with the design, there’s been a bit of overkill. The faux air vents under the headlights, the bulge in the belt line above the oversized wheel arches and the kink in the tail-lights seem out of sync with the basic design. But then one must admit, it is the XUV’s extroverted styling that drew most of its 35,000-plus customers into Mahindra showrooms in the first place. The fact is that the kitsch styling is a hit.

It’s when you open these SUVs’ doors that this competition begins in earnest. Both carry a lot of their external personality into their cabins. So once again, where the XUV seeks to win you over with style, the Duster keeps things simple. To start, the XUV’s dashboard certainly looks a whole lot more interesting than the Duster’s. The XUV dash’s central screen is neatly integrated, the complex-looking air-con vents are easy to use and even the hooded dials in the instrument binnacle look great. There’s lots of space for smaller items too. But smart as it is, the cabin is poorly executed. The plastics look cheap, the buttons on the centre console feel tacky and panel fit isn’t great either. To say that the XUV’s cabin quality is a letdown would be an understatement.

Not that the Duster is much better in this area either. Many plastics feel like they are out of a budget hatchback and the dashboard design can be termed functional at best. The leather seats look like an aftermarket job and the cabin too is not free from its ergonomic glitches. The steering audio controls are positioned on the column rather than on the boss, and hence remain out of sight. Even the positioning of the electric mirror adjust knob under the handbrake takes time getting used to. For its part, the Duster boasts a more robust build quality than the XUV.

Also, as the Duster sits lower than the XUV (though it’s still got marginally more ground clearance), it’s the easier SUV to get into and out of. On the flipside, you don’t get as commanding a view of the road as you would from the XUV’s elevated driver’s perch. Both SUVs offer good front seat comfort but it’s the XUV’s better bolstered (if slightly firmer) pews that will hold you better. However, shoulder support is uncomfortably excessive. Oddly, the driver’s seat adjustment is an issue on both SUVs. Where the XUV positions the backrest recline knob and height adjust lever too close to the door, the Duster’s height adjust is simply cumbersome to use.

Moving into the back, you would expect the XUV to be significantly comfier than the Duster, but that’s not entirely the case. Though the Duster can’t match the XUV for legroom, it’s spacious enough in its own right. What works in the Duster’s favour is its seat, which offers substantially more thigh support and better overall comfort than the XUV’s middle row. However, the equation changes when you need to seat three in the back, which is when your passengers will appreciate the XUV’s wider cabin and flat floor. The Duster’s protruding central rear air-con, which looks like a tacky afterthought (and it is) eats into middle passenger legroom and really hurts five-up comfort.

This leads us to the XUV’s seemingly big advantage in its third row of seats. While the ability to carry seven makes the XUV ideal for buyers with large families, you should know that the last row of seats are short on space and comfort. When not in use, they are best left folded, which helps free up a lot of room for luggage. The Duster may be down on space, but it has the better-shaped luggage bay and also gets a parcel shelf (again, poorly finished) to keep all your belongings hidden.

Just to clarify, we’ve featured the top-spec versions of both SUVs here, though it is the base XUV in W6 trim that matches the Duster 110 RxZ for features and price. A USB/aux-ready audio player, Bluetooth telephone function, steering-mounted controls, reverse parking sensors, keyless entry and dual airbags are available on both. Where the XUV W6 features automatic headlights and wipers and climate control, the Duster gets alloy wheels and can be had with optional leather seats. There’s a near-Rs 1.5 lakh gulf between these and the XUV W8 pictured here. The additional money buys you tyre pressure sensors, touchscreen with GPS, ESP, hill descent control and six airbags.

It’s when we actually get down to driving the two SUVs that the scale starts to tip heavily in favour of the Duster. And truth be told, that’s more to do with the XUV’s weaknesses than the Duster’s strengths. Here’s why.

Despite the XUV’s 140bhp, 2.2-litre mHawk turbo-diesel engine’s bottom-end torque and responsiveness through the rev range, its six-speed gearbox’s mediocre shift quality and heavy clutch simply spoils the driving experience in the city. Gears don’t slot in as precisely as they should and the jerky clutch-release action (possibly a function of the XUV’s dual mass flywheel) is a constant irritant in slow-moving traffic. Hard acceleration also results in severe torque steer, which gives the steering a mind of its own. This can be quite disconcerting when powering up a twisty road.

The Duster’s got a heavy clutch too and gearshifts on its six-speed gearbox are also a tad notchy, but these issues are nowhere near as bad as on the XUV. Even in terms of performance, the Duster has the edge. We’re not talking simply of its 0-100kph time here but, rather, the more relevant yardstick of in-gear times. The Duster’s clever gearing helps keep the 1.5-litre K9K engine in its 2000-4000rpm comfort zone, so you won’t really feel the 31bhp power deficit in most situations. Of course, the Duster’s 470kg weight advantage plays a part here. That said, the Duster feels comparatively weak under 1500rpm, so you’ll need more throttle to build speed in first gear, especially with a full complement of passengers on-board and on steep inclines.

But it’s in ride quality that that the Duster clearly trumps the XUV, despite the latter’s more sophisticated suspension (front MacPherson struts and a multi-link at the rear) compared to the former’s front MacPherson, rear torsion bar setup. The XUV simply can’t match the manner in which the Renault takes the rough stuff in its stride. Where the Duster simply glides over broken patches of tarmac without much fuss or noise, the XUV rudely crashes through potholes and the like. Add to this that the XUV’s steering also tends to kickback rather viciously on uneven surfaces, and you’ll know which of the two SUVs we’d recommend for the adventurers among you.

Even on a twisty road, the Duster holds its lead. It’s not particularly engaging to drive, but it’s got far better body control, grippier footwear and a nicer steering weight. It’s also better under braking despite the XUV being the one here with disc brakes at the rear as well. When it’s time to park too, the Duster’s smaller dimensions and tighter turning circle make it far easier to place than the XUV.

In terms of value for money, the XUV is great with its rugged SUV looks, strong motor and plethora of features available (even in the base W6 variant). In India, that’s a good enough reason for a car to succeed. But that is the XUV’s greatest weakness as well – its appeal stems from what it has rather than its performance. That Mahindra has yet to sort out many issues regarding the XUV’s cabin quality (the silver paint on the gear knob and door handles was flaking off on our test car), brakes (noisy), gearbox and electronics only weakens its case. The XUV is no doubt a good product but, at the end of the day, it comes across as one that promises more than it delivers.

Much to the contrary is the Duster, which has genuine strengths in its ride quality, fuel economy (14.4kpl overall) and good build. Its cabin may look a few classes lower, but on most other counts, there’s little the Duster will disappoint you with. Well rounded, practical and comfortable, the Duster is our choice of SUV to buy.