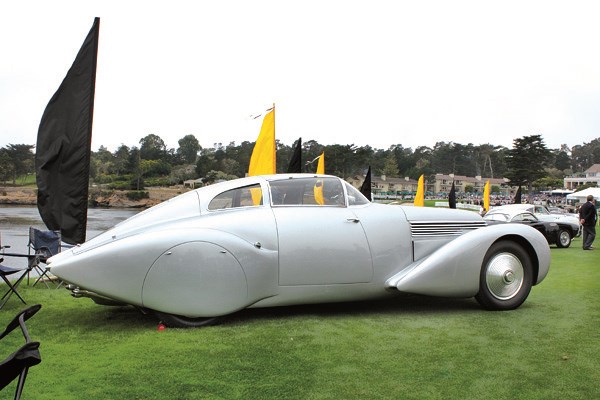 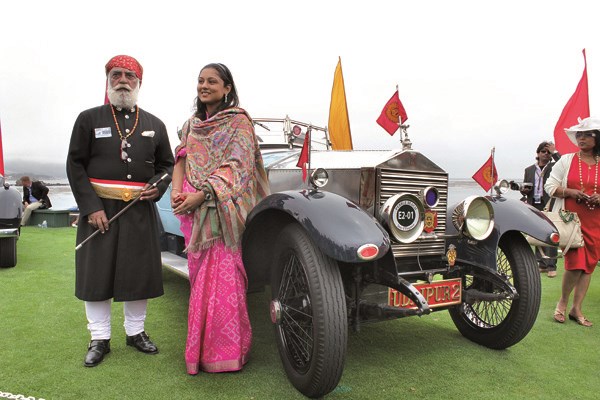 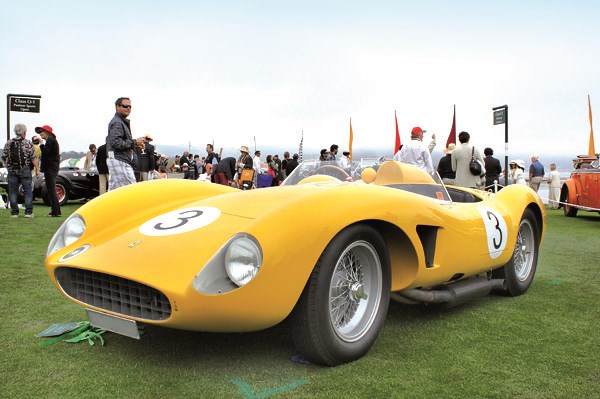 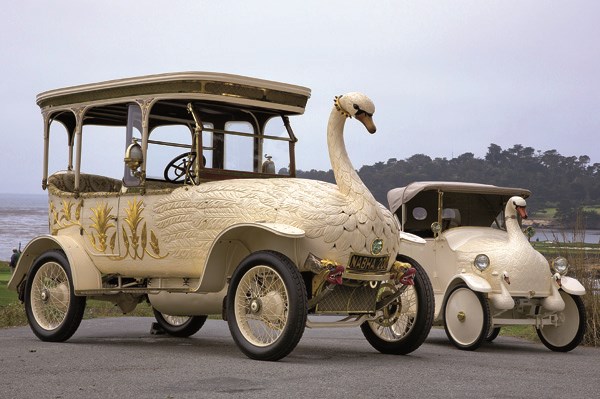 From our archives: As classic car events go, it rarely gets grander than the Pebble Beach Concours d’Elegance 2012.

As any serious golfer will tell you, the Pebble Beach Golf Links in California is among the most exclusive (and expensive) places you could swing your Callaway. But for just one Sunday in August each year, the golf karts on the famed eighteenth fairway give way to vehicles a lot less utilitarian and a whole lot more glamorous. On that one Sunday, the idyllic seaside golf course plays host to the Pebble Beach Concours d’Elegance, arguably the best known and most anticipated event in the global vintage and antique car circuit.

My Pebble Beach experience actually started a day before the Concours at the Laguna Seca race track, where we were witness to some hotly contested classic car races. Camped by the wildly tricky Corkscrew corner, it was quite a sight to see a full pack of growling (and not hissing) Shelby Cobras go wheel to wheel with each other. Incidentally, AC and Shelby were among the featured brands at the 2012 Concours as a mark of respect to Carroll Shelby, who passed on earlier this year, and also to commemorate 50 years of the Shelby Cobra. The same night I also managed to see the final bidding session at the world-famous RM Auctions, where a 1962 Ferrari 250 GT SWB California Spyder fetched 8.5 million dollars! I couldn’t recall feeling that small ever.

That was until the next day because nothing, just about nothing, could have prepared me for the sheer scale and grandeur of the actual Concours. Word on the greens was this year’s event had over 200 million dollars of machines! That’s the GDP of some small countries, I’m told. With so much to see and the sky looking more overcast Mumbai than sunny California, time was of the essence. But where to start? There were, after all, 28 categories of vehicles (including one for German motorcycles) and over 200 exhibits. Armed with my Canon, I first made my way to the ‘Antique: Small Horsepower’ section, where my eyes immediately locked on to a bright-red Franklin Open Four Seater from 1904. This particular car was known for its durability and its greatest selling point was that it never overheated despite having an air-cooled engine. Another long-distance machine of the time was the 1903 Packard Model F that was standing close by. It was capable of carrying fuel for 250 miles, oil for two days and water for four weeks!

A few steps away was the Mercer exhibit. Mercer cars were seen as rich man’s toys (they cost five times as much as the Ford Model T) and were famous for being taken straight from the showroom to the race track. The 35 J Raceabout was their most popular model and it wasn’t uncommon for buyers to remove the fenders, running boards and lights in the quest for more speed, just like the car on display. American cars are known for their muscle, so it’s only fair I put in a mention of the 1930 Cadillac 452 Fleetwood Roadster. Why is the 452 famous? Well, it was the world’s first car to feature a V16 engine with 452 representing its 7.4-litre engine displacement in cubic inches. Another American car that caught my attention was the oddball Hoffman X-8 from 1935. The ‘X-8’ name was for the radical X arrangement of its eight cylinders. It never made production, however.

Among the other Yankee exhibits of note was the 1947 Studebaker Sportster that looked nothing like one. After taking delivery, its owner, a Mr Vincent Gardner, took it apart, and fit it with a unique transparent hood, earning it the name of ‘Bubble Top’. But my absolute favourite of the American Sport Customs entrants was the aluminium-bodied Norman Timbs Emil Deidt Roadster from 1948, whose curvaceous design was influenced by the streamlined racers of the 1930s.

Race cars were fairly well represented too and included the massive 100hp Benz Two Seat Race Car which was brought across the Atlantic to be driven in the 1910 Vanderbilt Cup, a major race that was held near New York. I’ll never quite get my head around how these cars managed the dirt courses they raced on. There was a full brigade of racing Ferraris too, including the 500 Mondial Pinin Farina Spyder that raced in the Targa Florio and Mille Miglia in 1954. This car was replaced by the 500 TR or Testarossa  in 1956. Its heart-achingly gorgeous bodywork by Scaglietti and canary-yellow paint literally cast me in a spell. There were quite a few of Ferrari’s road cars too but not the kinds you’d typically find on a poster wall. The ultra-rare 1964 400 Superamerica Coupé was one such model, and it’s said that no two cars were alike.

But as far as manufacturers go, Rolls-Royce is most synonymous with vintage car events and expectantly there was a nice array of Phantoms and Silver Ghosts, each with their own unique story. The car with the most chequered history would be the 1912 Cann Roadster that over its life has served as a trials car, been outfitted as a truck and even served as an ambulance during the first World War. But by far the most fascinating cars belonged to the Maharaja Class, featured at Pebble Beach for the first time. There was the 1925 Rolls-Royce Phantom I Coupe that once belonged to the Maharaja of Jodhpur. It was used as a hunting car and was unique for its three-seater coachwork by Barker. Then there was the part-aluminium-panelled ‘Star of India’, a majestic 1934 Phantom II that got its name from the 563-carat Star Sapphire. The regal car is all set for return to India after 44 years with its re-acquisition by the grandson of the Maharaja of Rajkot, who was its original owner. Another famous Rolls-Royce, the immaculate 1924 20HP belonging to Arvind Singh Mewar, Maharana of Udaipur, was awarded the prestigious Lucius Beebe Trophy.

There was also the stylish Delage D8 Figoni Cabriolet that was often referred to as the ‘Rolls-Royce of French Cars’. This very car was ordered by Maharaja Holkar of Indore in 1930, though it is currently owned by Bangalore-based collector Dr Ravi Prakash. But the car that literally stole the show was the 1910 Brooke Swan Car that was once owned by the Maharaja of Nabha. Its original owner wanted a car that would resemble a swan gliding through water and the result was spectacular. For added effect, English coachmaker JW Brooke and Company even equipped the car’s beak to spray steam at the touch of a button! Standing alongside, the Maharaja of Nabha’s ‘Baby Swan’, built in his garage for use on his estate, drew more smiles than comedian Jay Leno’s banter, who is a regular face at the Concours.

The Maharaja of Alwar’s Hispano-Suiza H6B Kellner Cabriolet also garnered its share of eyeballs, though my pick of the Hispanos at the show was the Dubonnet ‘Xenia’ Coupé. It looks outlandish in 2012, so I can only imagine what the reaction would have been when French coachbuilder Jacques Saoutchik completed it in 1938. Saoutchik, who began his career in his family’s furniture business, went on to establish one of the grandest coach building companies. Little wonder then that his 1928 Mercedes-Benz 680S with a ‘Torpedo’ body went on to win the coveted Best of Show title.

Luckily for me, the weather held out that day and I managed to see (and drool over) everything on display, right from a Bugatti Type 57 to the Lancia Asturia from 1936 that gained notoriety when Italian dictator Benito Mussolini made them official government transport during his regime. Seeing the 1885 Daimler Reitwagen that laid the foundation for the modern automobile in the flesh also made me realise just how much progress has been made over the past 125 years.

It was an absolute delight to see the masterpieces outside their temperature- and moisture-controlled garages, though I’ve promised myself to make it for the Tour d’Elegance (see box) some day to see these stars in motion. If you’re a fan of vintage cars and automobiles in general, you should do so too. It’s seriously worth going the distance for. behind the glamour

Concours d’ Elegance literally translates to ‘a competition of elegance’ so the cars are judged for their historical accuracy, function, condition and, above all, style. All entries are by invitation only, but more interestingly, most of the featured cars are first-time exhibits at Pebble Beach.

That’s quite an organisational feat when you consider the first Pebble Beach Concours was held in 1950. To qualify, the cars need to be in running order and are given extra consideration if they participate in the ‘Tour d’Elegance’ driving event in the run up to the Concours.