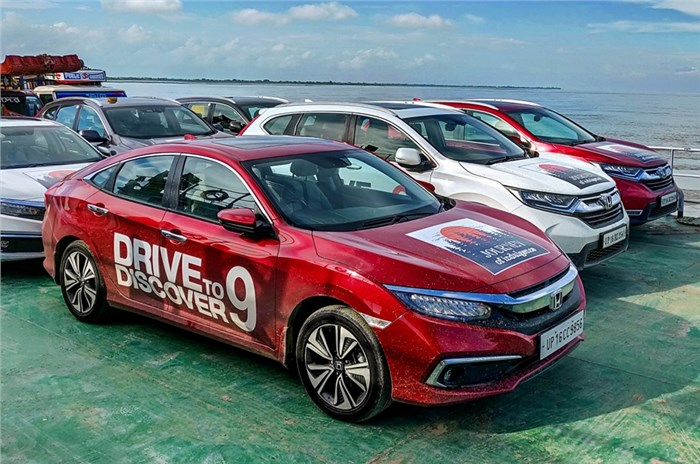 The ninth edition of Honda’s Drive to Discover took us to the land of hills and valleys and the mighty river Brahmaputra.

The northeast is one of the most serene and probably the last of the untouched, naturally beautiful places in India. While it has been on my travel list for quite some time now, there was just never the right time. Luckily, Honda’s Drive to Discover 9 invite had just dropped in and this time the convoy was set to discover the depths of Assam.

For those who are unaware of Honda’s Drive to Discover, it is a drive that allows journalists to experience the manufacturer’s car line-up on Indian roads over a span of a few days. We had with us the all-new Honda Civic sedan and the Honda CR-V SUV for the four-day drive across the northeast.

Before the tranquillity of the cars, however, the flight from Mumbai to Guwahati reminded me how air travel can spike up panic levels in a matter of seconds. The amount of turbulence in the flight, even for a few minutes at a stretch, was enough for me to start praying for a safe landing. Upon arrival at the Guwahati airport, we were transported to our hotel and later on all the journalists got a chance to get together and socialise. Along with a sumptuous dinner, the night was bettered by performance from a very talented local band.

The next day, after an early morning breakfast, we were briefed about the day’s plan. A 300-odd km drive from Guwahati to Nimati Ghat and from there we had to catch the last ferry that left at 4pm for Majuli, where our stay for the night was arranged. And, as quoted by the organisers, if we missed the ferry, we’d have to spend the night in our cars. No pressure. I picked up the car key that was assigned to us and was glad to find out that it belonged to a Honda CR-V diesel. We set off on the NH27, which is a stretch of about 100km of nice and smooth tarmac that’s lined with vast green pastures and picturesque views. The CR-V’s 120hp diesel, paired to a 9-speed automatic, isn’t a stellar performer but was at home on these highways, staying calm and composed while cruising. The road towards Nimati Ghat also took us through the animal corridors of the Kaziranga National Park. It’s important to follow the speed limit in these corridors strictly as this is the buffer zone of the national park and some of the animals often come to these areas for grazing. We weren’t lucky enough to spot any though, but the drive gave us a rough idea of how massive the National park actually is. All the cars were driving at a good pace and eventually made it on time at the end. The 45min ferry ride took us across the breadth of the mighty Brahmaputra to the river island of Majuli, where we would be staying for the night. For those of you who are unaware, Majuli has been recognised by the Guinness Book of World Records as the world’s largest river island since it is surrounded by two channels of the same river. We reached Dekasang resort where we got to taste some of the local cuisine and also enjoyed a folk dance performance under the moonlight. 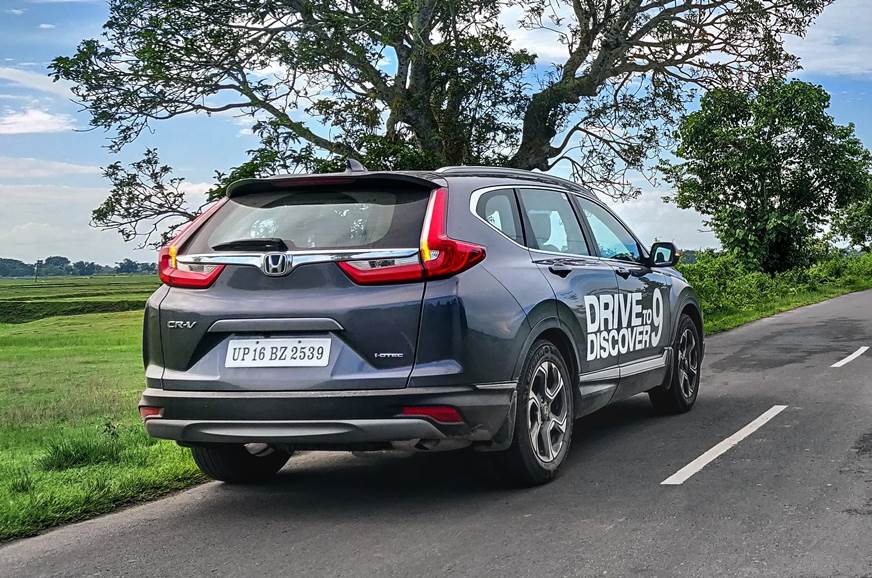 After a good night’s sleep, it was time to embark upon the second day of driving on the Assamese roads. This time too we had a diesel car but not the SUV, but the sleek, low-slung Civic sedan. The 430-litre boot was big enough to swallow the luggage of three passengers with ease. To be honest, I was a little curious to see how this low Civic would fare on some of the bad patches of roads that we had seen because these would be a real challenge in these areas. Today’s destination was Dibrugarh, with a stopover at Pasighat for lunch. After a quick look at Google Maps, which told us that the lunch destination was about 200km away, we set off in the diesel-manual Civic. Unlike the first day, these roads were quite a contrast. There were nice, long stretches of single carriageway roads, which were perfect for the Civic to stretch its legs on. The car felt so planted, and with its wonderful steering, it always felt connected to the road, which made driving it on those winding roads good fun. What added to the fun was the smooth-shifting 6-speed manual gearbox on the diesel engine. We had to keep an eye out for the occasional cattle that were ‘chilling’ on the road. It’s extremely important to be careful here, as the long stretches let you carry good speed, but you might just encounter some cows or sheep crossing or sitting in the middle of the road on a blind corner. The Civic’s all-wheel disc brake setup was very effective in bringing the car to a halt from speeds, whenever necessary. We also encountered some stretches of bad roads and the Civic passed the rough-road handling capabilities with a surprising good score. Of course, you do have to consider what you are doing, unlike when in the CR-V, but it’s still impressive. We had to enter Arunachal Pradesh to reach Pasighat and it was way past lunch time when we arrived at the Donyi Hango Camp Homestay and Resort. On the menu were plenty of local dishes and some amazing desserts as well. The locals also had some Bhut Jolokia or ghost chilli pepper, which is over 400 times hotter than Tabasco sauce. Some of the others were brave enough to taste it and then gulp down bottles of water to bring back their taste buds to normalcy. Me, I chickened. The next stop was Pasighat bridge, it goes across the Brahmaputra and is approximately 1km in length. Fun fact – the bridge took over two decades to build due to restricted working seasons. After clicking plenty of pictures of the beautiful view and the cars, we were off to Dibrugarh, which was back in Assam. It got dark pretty early and the Civic’s all-LED lights did well to light up the road, allowing us to make good progress. Since we were at the mercy of Google Maps, and it was dark, we didn’t pay much attention to the surroundings until I realised that we were on a bridge that was very long and going on for more than most bridges that I’ve crossed in my life. A quick search revealed that we were in fact on Bogibeel Bridge, which is in fact the longest rail-cum-road bridge in India, at 4.94km. This humongous manmade structure was quite breathtaking and serves as a major convenience. It has cut down the travel distance from Itanagar (capital of Arunachal Pradesh) to Dibrugarh (our destination for that day) by over 150km, which is roughly 2-3 hours on north-eastern roads. Going by train? You would be covering 705km more if it were not for this bridge. We reached Dibrugarh late at night and that was a wrap for the day. 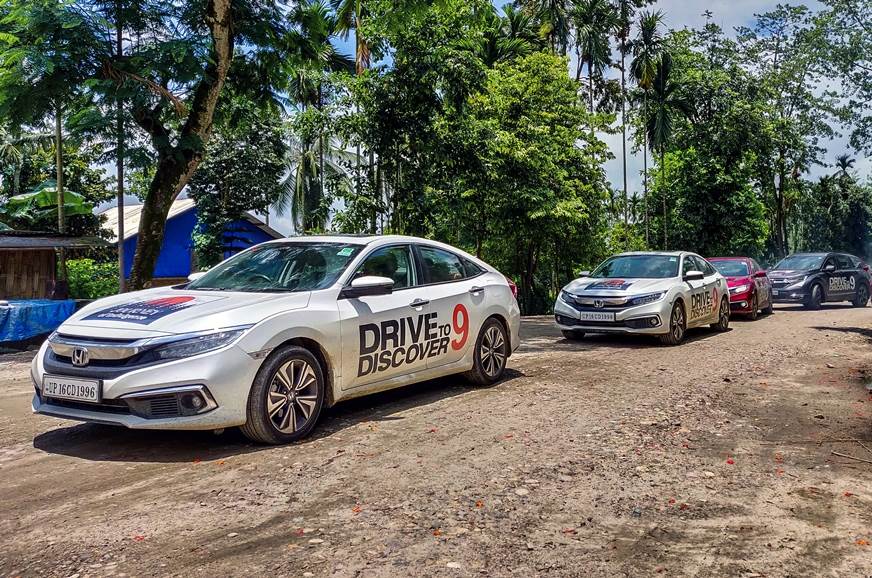 Next morning, it was time for us to switch to petrol, and we got in the CR-V petrol-automatic for our next destination – the Kaziranga National Park. Unfortunately, the National Park is closed for safaris during monsoons. So, if you are planning for a safari into the depths of Kaziranga, avoid visiting from the first of May to end of October. We had a 200-odd km journey in front of us, with a lunch stop at Gibbon sanctuary. The scenic views that we passed on the way to Gibbon made the drive feel effortless. It was, in fact, quite enjoyable and we also made it before the scheduled time for lunch. What you need to know about this small wildlife sanctuary is that it is named after the only ape in India, the Hoolock Gibbon, and is also home to lots of rare species of trees and animals. It is open for visiting throughout the year, but the best months to visit are from February to March and from June to July. We resumed our drive towards the Kaziranga Resort, and this time I took to the back seat to get the chauffeur-driven experience. The rest of the drive was spent in sheer comfort of the back seat, which provides good support and even the backrest angle is set perfectly to let you drift off to sleep on highways. Large windows gave a great view of the beautiful landscapes and the big panoramic sunroof helped give that extra sense of space. We reached the Kaziranga resort in the late afternoon, amidst heavy rainfall, where we retired for the night. 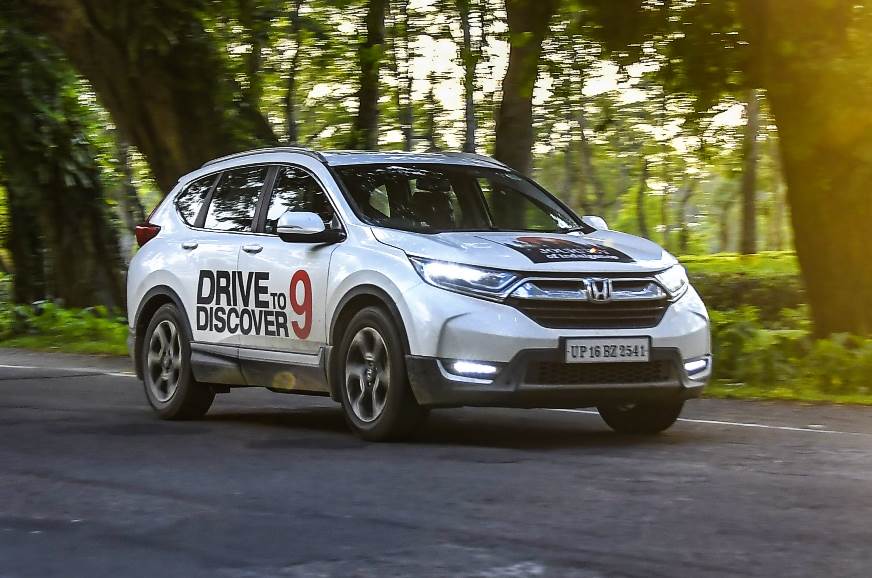 It was the last day, and we were handed the keys of the Civic petrol. We were again driving through the animal corridors and while we had given up hopes on seeing the majestic one-horned rhino in the wild, we were still optimistic that we would spot one grazing. Lucky for us, we spotted two of these majestic creatures, along with a big wild water buffalo. Feeling satisfied on watching the rhinos in their natural habitat, we got back onto the road, making our way to the airport. With 141 horsepower at our disposal, the Civic was in its comfort zone on the long highways. The slightly stiff suspension and precise steering made the car stick to its line on winding turns. After dropping the cars off at a dealership stockyard, we set off for the airport to wait for our flights. With a bag full of various souvenirs and a mind full of memories, it was time to go back to the city life. Four days in the northeast is obviously not enough to explore the region to its core, and that was never the point of this trip. These few days were some of the most serene I’ve experienced in quite some time and the cars that got us through just made it even better. What Drive to Discover has done is that it has instilled an urge in me to go back to the northeast to spend a considerable amount of time and be one with nature. Hope it does the same for you. 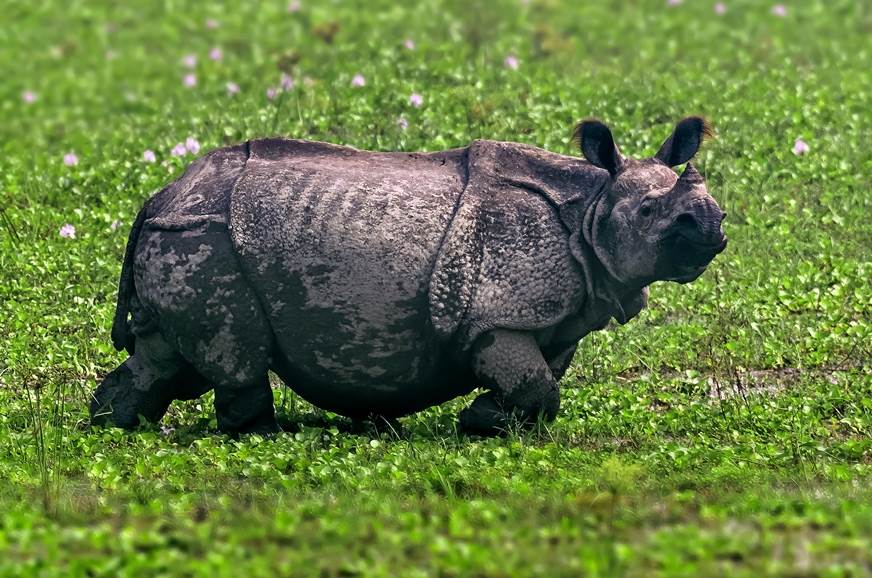