Dubai was the playground for Nissan’s SUVs at its Heritage Drive Experience. We take a few over the hot dunes and across the glass jungle. 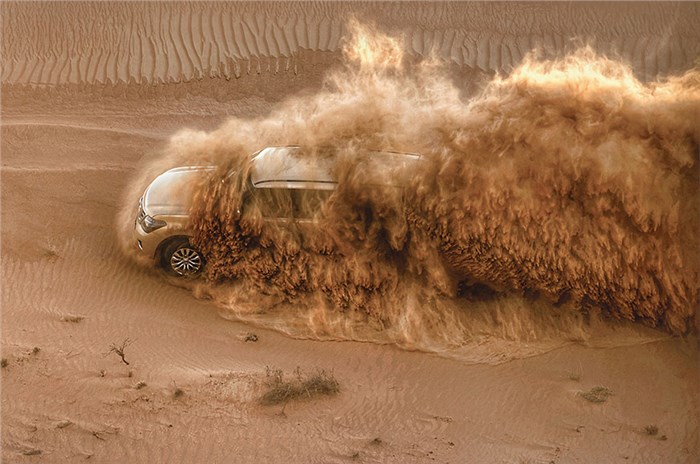 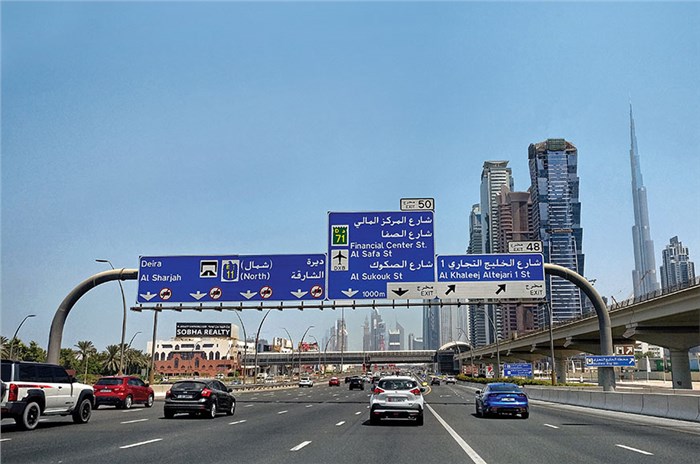 There’s no better place to view the stark contrast of Dubai than from the 48th floor of the famous Dubai Frame – a 150-metre-high structure that’s won multiple design awards and is, well, quite simply the biggest photo frame in the world. On one side, you have vast, majestic deserts with a traditional middle-eastern vibe, while on the other side is Dubai as most know it today – futuristic skyscrapers piercing the sky and city streets peppered with exotic supercars. The dual landscape was a perfect setting to experience some of Nissan’s best-selling SUVs.

We drove four SUVs from their quite potent stable in the Arab Emirates – the flagship Nissan Patrol, powered by a big V8 engine; the iconic Pathfinder, which had a cult following as an SUV but is now more of an urban crossover; the X-Trail, the previous generation of which was part of their Indian line-up; and lastly, the smallest of the lot – the Kicks. Now, while the Kicks is, for the obvious reason, the most interesting one here (set to launch in India next year), this was the UAE model and not the one that we will eventually get.

As for the drive itself, we had two days, with the first one being straight out on the dunes; no easing into things here. After a nice, healthy lunch of fresh salads and the staple hummus with pita bread, I was raring to go. Before that, however, was a briefing about Dubai’s stringent driving laws and absolutely unforgiving officials. That didn’t dampen my spirits; but stepping out of the air-conditioned hotel lobby, my excitement simply evaporated in the scorching Dubai heat. The temperature on the phone showed close to 45deg C, and baking in this heat was the entire convoy of SUVs. 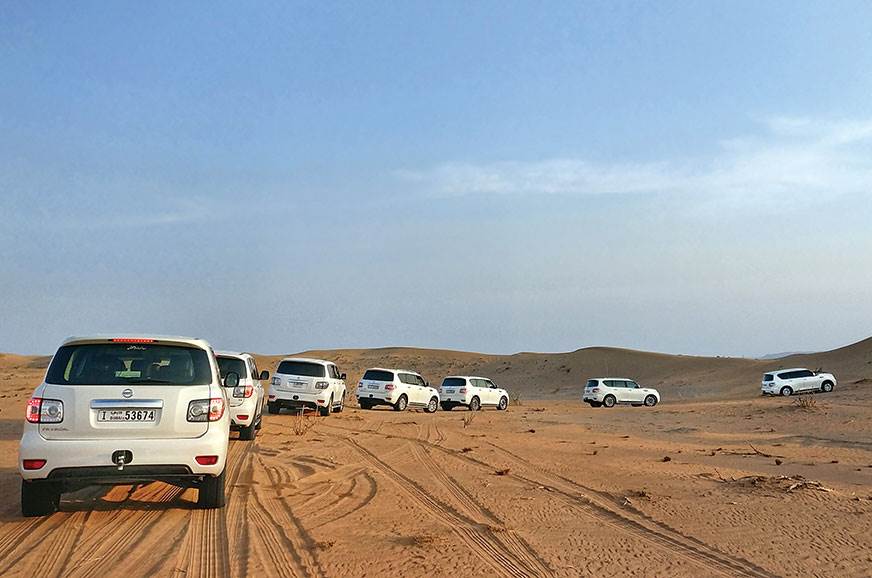 Following the grooves and maintaining momentum is crucial in desert driving.

As luck would have it: the Patrol I would be driving was black. Mumbling expletives, I hopped into the cabin. To my relief, the AC was on full blast; and the icing on the cake: fantastic cooled seats. We left the hotel in the most disciplined manner, straight onto the vast multi lane highways of downtown Dubai. Here, the V8 engine was relaxed and barely broke a sweat. Cruising at 100kph seemed like a cakewalk with none of the usual V8 traits like the burbling, or the raucous engine note. It was silent and almost like an airplane cabin inside. We left the city behind and passed countless camel caravans on a small desert trail until we arrived at our destination – soft sand, wild hot winds and an eerie calmness, soon to be disrupted by 15 growling V8s.

We exchanged our rather urban Patrols for slightly tweaked ones to help in the desert. These had the bumpers replaced for a higher approach angle and they also had roll-cages installed for safety. I engaged sand mode, selected 4H on the gearbox for power to all four wheels and turned off traction control for uninterrupted power. A top tip while driving in the desert is to lower your tyre pressures, which results in a wider footprint and prevents you from sinking in. All checks done, we began the dune bashing. The soft desert sand tried to suck the SUV in at all times so I needed to keep the momentum going and have a steady right foot. Too much power will literally bury the wheels in, while too little will make you sink. Getting a good grip on the steering is very essential as well, because the grooves in the sand tend to pull you their way, so you are constantly wrestling with the car. This may all sound quite strenuous, but in reality, it was an absolute blast. I had a big V8 SUV, sand as far as the eye can see, and most importantly, the chance to go flat-out in a controlled environment. 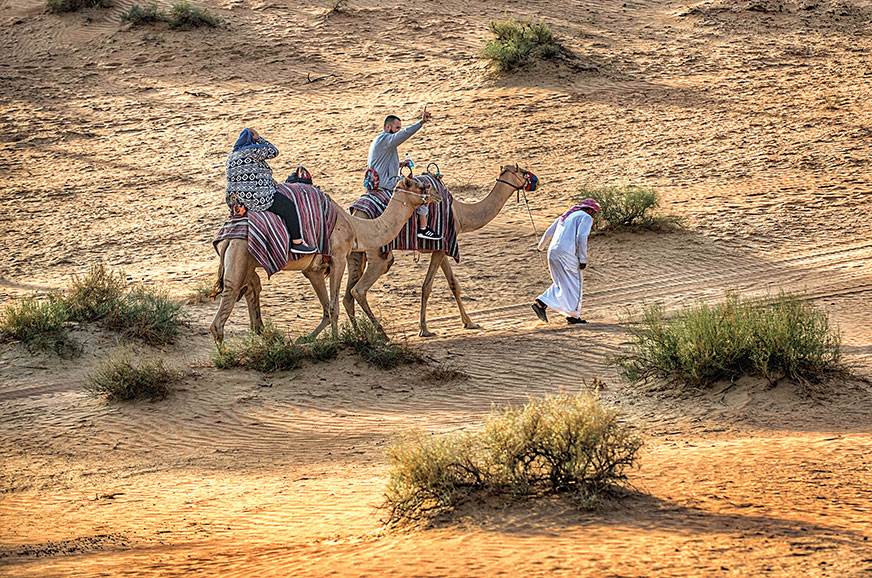 Sighting a camel caravan in Dubai is as easy as sighting a supercar.

Countless jumps and sand-drifts later, it was time to head back. We left the dunes and the setting sun behind us. On the journey back, I chose the Pathfinder. On the desert trails and eventually the highways, the smooth petrol-CVT combo made for a relaxing end to an adrenaline-packed day. It was pitch dark by the time we reached the hotel but the temperature was still hovering around 40deg C. But seeing Dubai under lights is like a seeing a whole different city. The well-lit roads and glass skyscrapers laden with bright lights make for an epic skyline.

Day two was quite the opposite of the first day. There were no more deserts or sand dunes to contend with. In fact, we were to drive in the heart of the city and visit some tourist spots including, of course, Dubai Mall. I chose to try out both the X-Trail and Kicks for this city drive.

I quickly realised that while the X-Trail had 4WD and was built keeping a certain level of off-road ability in mind, the Kicks was strictly an urban vehicle. 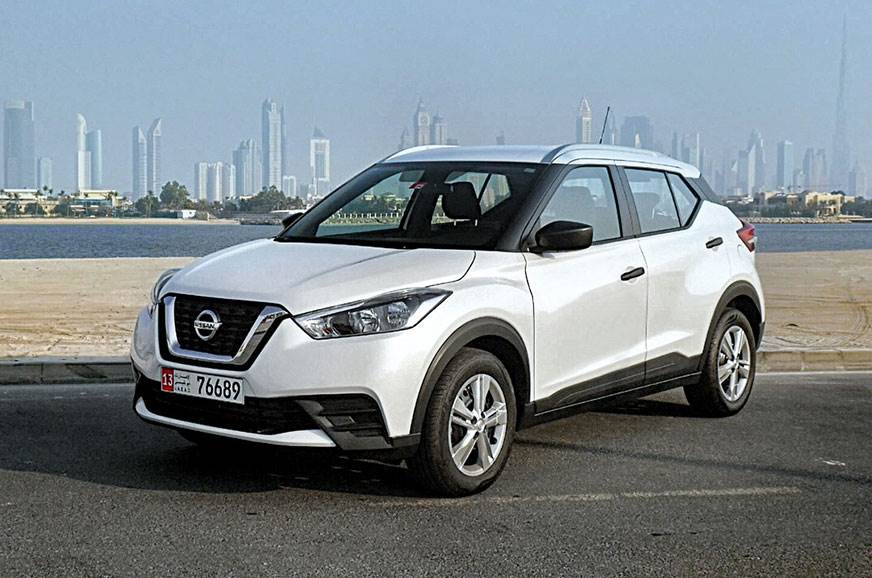 Even in a place as chic as Dubai, the Kicks looks smart and fresh.

The international version of the Kicks is smaller in dimensions and with less equipment compared to the one that will make it to our shores. First impressions were quite positive and it seems to have all the right ingredients. It is light and easy to drive, has a nice and practical cabin with good space on offer, the engine-gearbox combination worked seamlessly and it has that all-important SUV feel.

Now, driving a Kicks amidst gold Ferraris and lime-green Hummers does make you feel out of place, but in India, the design is likely to appeal to a vast audience, as it is funky and unique. We reached Dubai Mall and it was immediately evident that this is nothing like your traditional shopping mall – it is a small world in itself. After a sumptuous lunch at a plush restaurant, we made a run for the airport. 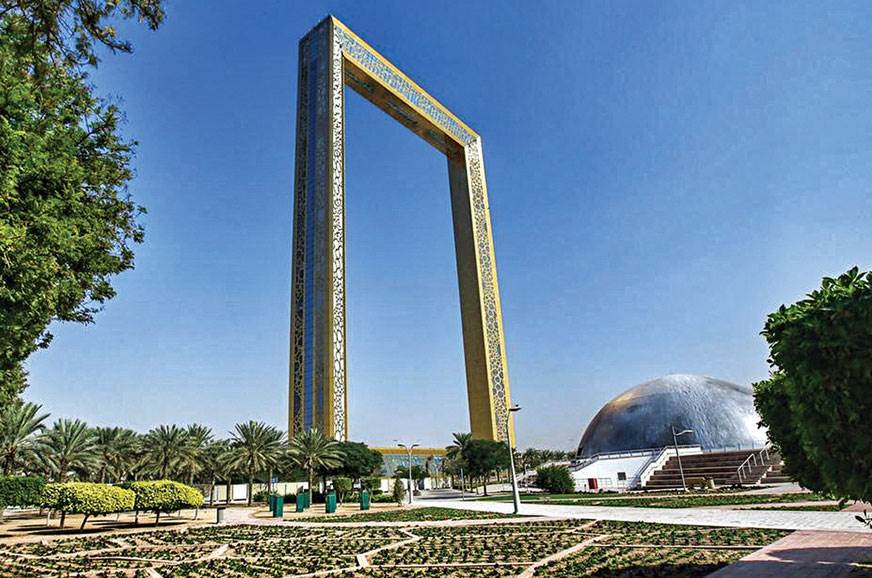 At 150m tall, the Dubai Frame is the largest photo frame in the world.

Strapped into my flight seat and homeward bound, I looked down and saw both sides of Dubai – one with its barren, dusty deserts, and the other with the sparkling lights and luxury.

I mulled over the thought of the Patrol and Pathfinder not making it to India and the X-Trail having fallen off the radar – but it was a good two days and an interesting chance to experience Nissan’s SUV credentials. I realised that all the SUVs possess the same characteristics as that of Dubai: they are all rough and tough, and able to take on the harshest weather and terrain while feeling right at home in one of the most opulent places on earth.