We take a trip in a Honda Brio to the Asiatic lion's last remaining home on the continent at the Gir National Park and wildlife sanctuary, Gujarat. 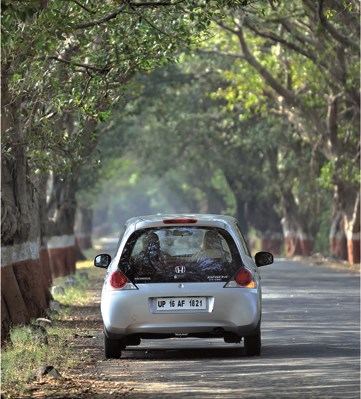 If you have always wanted a real encounter with the king of the jungle, we recommend you head to the ancient forests of Gir – the only natural domain of the Asiatic lion. For ages, the magnificent inhabitants of the Gir forests have symbolised India’s pride and today, the area is home to more than 400 Asiatic lions. The Gir forests are spread across two districts – Junagadh and Amreli – and are divided into two territorial divisions, east and west. The entry point to the national park, the wildlife division of Gir with its headquarters in Sasan, is around 350km from Ahmedabad.

We started our drive from Iscon Circle, Ahmedabad, early in the morning and headed down S G Road towards Sarkej. It’s a pretty straightforward route via NH8 (A and D), passing Limbdi, Rajkot, Gondal, Jetpur and Junagad cities. Well paved national and state highways will help you cover this distance in less than seven hours as you go through NH47, NH27, SH123, NH151 and SH26. But don’t let these names baffle you. Some of these are alternate labels for the main NH8 (A and D), and coming across these milestones is only an assurance that you are on the right track. This route also has fuel pumps, rest rooms, food joints and ATMs in abundance. You will come across countless unmarked intersections before you reach Rajkot, but there’s no need for any local assistance. Follow the road map on page 134 and it will take you to the home of the Asiatic lion without hassle. The closest city to Sasan-Gir is Junagadh, which is 70km away. From Junagadh, it’s a pleasant drive through Mendarda on SH26, with plenty of scenic and winding stretches. As you near Sasan, keep your eyes open for wild animals crossing the road. A Bharat Petroleum fuel station on your left indicates that Sasan-Gir is just 2.5km ahead.

For nature lovers and landscape photographers, the Gir National Park is perfect. But remember, visit and stay at a national park requires lots of planning. The forest department gives away only 90 permits for the jungle safari a day, of which, only 50 percent are allocated for current bookings, with the rest booked in advance. And if you thought getting a permit is as simple as filling up forms and paying the fees, it’s not. You have to wait in queue for more than a couple of hours to make it within the allocated 15 permits per slot. With three safari slots – 6.30am, 9.30am and 5.30pm – you have to reach the gates of the forest department headquarters, Sinh Sadan, as early as 4am if you wish to enter the park at the crack of dawn. Sinh Sadan is located on the main highway through Sasan and is your one-point-contact for information on the Gir National Park and the jungle safari.

A single trip permit costs Rs 400 and allows the entry of six people, including the guide. This fee goes up by 25 percent on weekends and 50 percent during festive seasons. While the forest department lets you drive your petrol-powered vehicle in the national park, only cleaner and efficient BS-III and BS-IV diesel vehicles are permitted in the park. You can also opt for an open-top jeep safari, which is the best way to explore the home of the magnificent big cats, and this will cost you Rs 1,000 in addition to the permit.

The best times to observe the lions in their natural habitat are at dawn and dusk. So the early morning/evening safari slots are your best bet at sighting them. Remember, late night entry into the park is not permitted and getting caught on the wrong side of the fence may mean a hefty fine, other than the obvious risk to your life. Winter is the best time to catch a glimpse of the jungle king and other animals. However, spotting a lion, leopard or a hyena depends purely on your luck. Keep your eyes and ears open for the smallest of movements in the bushes. Plus, a stationed forest department vehicle hints at the presence of a lion or a leopard – the observer team keeps a vigilant eye on these big cats.

The Government of Gujarat has declared an area of 1412sq km as Protected Area (PA), which comprises 258.7 sq km of national park and 1153.4 sq km of sanctuary. The forest department has charted out eight different safari routes and you will be allocated a particular route at the discretion of the officer. You may not be able to cover the entire park on a single day’s permit so it’s advisable to opt for an overnight stay package.

The Gir ecosystem comprises semi-arid forests with dry deciduous teak plantations forming 75 percent of the wilderness. This unique ecosystem harbours about 38 species of mammals, around 300 species of birds, 37 species of reptiles and more than 2,000 species of insects. The main carnivores in Gir are the Asiatic lion, leopard, jungle cat, hyena, jackal, mongoose, civet cat and the ratel. The desert cat and the rusty spotted cat are rarely spotted. The main herbivores of Gir are the cheetal, nilgai, sambar deer, four-horned antelope, chinkara and wild boar. Among smaller mammals, the porcupine and the black-naped hare are common. The reptilian fauna comprises the marsh crocodile, star tortoise, monitor lizard and some species of snakes. One can also spot some of the resident birds of the Gir like the crested serpent eagle, Bonelli’s eagle, changeable hawk eagle, red-headed vulture, peacocks, brown fish owl, pygmy woodpecker and the Indian pitta.

Earlier, lion shows used to be arranged for the benefit of tourists visiting Gir. However, this practice was found to be cumbersome and deleterious for the lions and it was put to an end. At present, Gir sanctuary and the national park are not divided into zones and there is no defined tourism zone. However, to reduce tourism interference in the main national park, and to facilitate better understanding of wildlife, an Interpretation Zone has been created at Devalia, around 12km from Sasan. The zone comprises 412 hectares of chain-linked fenced lion area which is Gir in a nutshell, covering all types of habitat and the wildlife of Gir. It also has a feeding-cum-living cage for carnivores and a double-gate entry point. The basic aim of creating this facility is to provide an opportunity to view lions and other animals in their natural habitat within a short period and to reduce tourist pressure. Keep in mind, Devalia is shut for tourists on Wednesdays.

Gir has a tropical monsoon climate with late November to early March being cool and dry. The temperatures drop to around 10 degrees in mid-winter and this is the best time to plan a trip to the dry forest. We did exactly the same and our trip proved to be rewarding. We spent the relatively hotter afternoon in the luxury of our hotel room and opted for an evening 5pm safari at Devalia. The pleasant temperatures in the evening gets the animals out of their hideouts in search of daily nourishments and it gave us our first glimpse of the Asiatic lion. Our guide told us it’s difficult to spot a leopard wandering around in the national park and if you wish to see one, you have to venture deep into the forest. Devalia proves to be the perfect setup to spot a leopard then.

Next morning it was time for the main safari and nothing can beat the experience of driving through the forest at the crack of dawn. The deer, wild boars and nilgai were busy grazing and the synchronised chirping of birds sounded like a musical of sorts. You could spot lions lazing around the park after a good meal or near water banks. With all fingers crossed, we followed fresh pugmarks next to the track and it led us to a lion relaxing in the bushes. Our guide remarked that hearing a lion’s roar would be the icing on the cake. And it was almost like the adult male lion heard him as he let out a mighty roar that instant! An interesting fact is that there are 411 lions in Gir and out of these, only 110 are male lions, making it more difficult to spot them. We should consider ourselves outright lucky then.

If you plan an overnight stay at Sasan, there are plenty of budget and four-star hotels in and around Gir and it may cost you anything between Rs 1,000 and Rs 8,000 per night. If you are looking for a no-frills budget hotel then Sinh Sadan guest house, run by the forest authorities, will serve your purpose. It’s advisable to book the rooms/cottages/tents well in advance.

We headed to The Gateway Hotel located on the main Sasan highway, the closest accommodation one can find around Sinh Sadan. It’s 200 metres away from the forest department headquarters and is located at the edge of the Gir forest. It’s the ideal resort for nature lovers and holidaying families with a perfect setting to take in the calm, far from the bustle of the city. Since the check-in time is at 2pm, you could leave Ahmedabad in the morning and reach the hotel on time. The hotel offers round-the-clock multi-cuisine fare but we suggest you also try out the Gujarati and Kathiawadi cuisine at the local dhabas and restaurants in Sasan-Gir.

When combined with the national park, on the way to Ahmedabad, if time permits, you could visit a few heritage sites in the city of Junagadh including the Uparkot Fort, Mount Girnar, Mahabat Maqbara and the Sakkarbaug zoo.

We left Gir with heavy hearts, loathed to leave behind the peace and excitement we’d found in the lap of nature. I prefer waking up to the sounds of birds’ chirping rather than chirping from friends and colleagues. I’m going to miss breathing in the clean and fresh smell of forests rather than exhaust fumes and of course, journeying through the sanctuary, keeping our eyes peeled for a glimpse of wildlife. The Gir national park and sanctuary is a green jewel in the crowded concrete monotony of modern-day life. If you fancy a break, it’s one of the few places in India that you simply must visit.