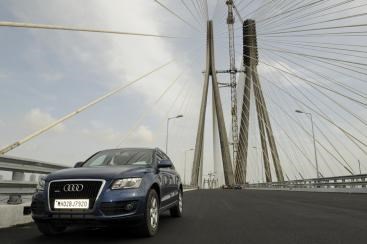 Mumbai's anticipated 4.7 km long Sea Link slated to open to general traffic in last week of June, 2009. One way toll to be close to Rs 50.

AUTOCAR INDIA was provided an exclusive look and a chance to drive on Mumbai’s spanking new Bandra Worli Sea Link. One section of the Sea Link is only a few days away from being opened for use (it is likely to open between the 23rd to 29th of June) and the experience of driving on this four-lane road turned out to be quite an eye opener.

At an average speed of 80kph, the approximately 5km-long bridge (4.7 km without the lead in and lead out) will take a mere six minutes to traverse as against 30 to 40 minutes needed to fight your way through Mahim traffic.

However, traffic authorities have indicated that the speed limit is likely to be more like 50 or 60km an hour. This is a shame as the bridge has been designed and built to be traversed at a minimum of 80kph, which might prove prudent with the monsoons just around the corner.

The most prominent feature of this bridge is the cable stay tower at the Bandra-end that towers 43 floors high, just off the shoreline. One way toll is likely to be Rs 50, but two- and three-wheelers are banned on the bridge due to the exposure to strong winds from the sea.

The Hindustan Construction Company, who built the bridge, say the other lane will be opened by November or December. HCC reckons that it has already used up enough steel in this project to go around the earth at least once.

While the final phase of this project has yet to be started, the proposal is to link the bridge right up to Nariman Point at the end of Marine Drive.