This year’s track day featured track-focused machines, a big ADV and even an electric scooter! Here's the report on all the action. 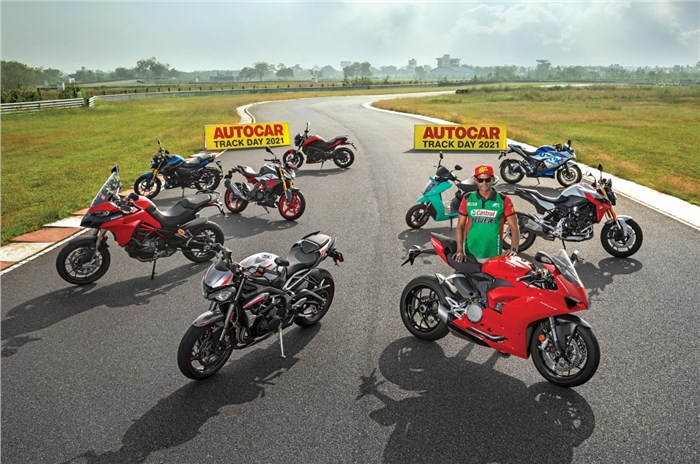 Every year, everyone in the Autocar India office looks forward to the end of August, for one simple reason. It’s when we usually gather all the exciting launches of the last 12 months and head to the Madras Motor Race Track in Chennai to see how fast they are around the iconic circuit. For obvious reasons, we were devoid of that experience last year, but to make up for it, we’ve held the track day as early as we could this year!

As usual, this year’s track day features bikes from all parts of the spectrum. In fact, this time around, we really widened the horizons of that spectrum by featuring, for the very first time, a scooter – and it’s electric! On the list of attendees were also a big ADV and a couple of very capable track machines. 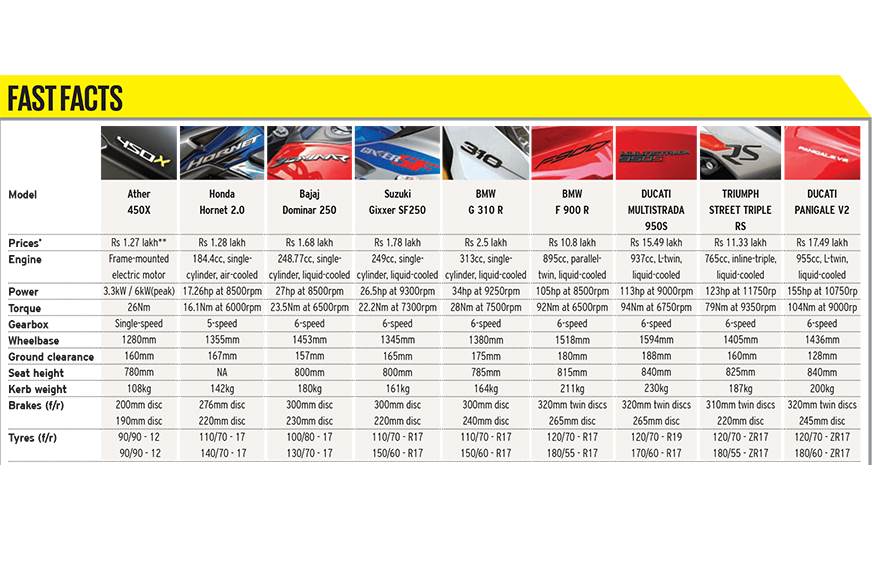 To set the fastest possible times these bikes were capable of, we called upon the very man who’s been setting our lap times for years now. Rajini Krishnan has had a long career with an even longer list of wins and championships, including nine different Indian National Racing Championships, so there was no doubt the bikes were in the right hands.

The Autocar Track Day 2021 rules remained as they’ve been all these years: all the motorcycles are run in their stock form and the only changes we made was to lower the tyre pressures to Rajini’s preference.

This year’s mix of machines is as varied as ever, but unlike last year, we knew there wasn’t going to be a contender that was about to set any records. There was also the fact that, due to the development of some bumpy sections over time, the track was about 1 to 1.5s a lap slower than the previous year. Having said that, the day did throw us some surprising timings. It's no surprise that the Ather 450X didn’t set any lap records, but it did make history by becoming the first scooter (and electric two-wheeler) at the Autocar Track Day. At first, Rajini didn’t seem too excited by the idea of riding a scooter around a racetrack, but after a couple of laps out, he came back with quite a big smile.

Rajini said he really enjoyed the instantaneous torque delivery and felt like it had enough performance to leave even a few motorcycles at stoplights in the city. He was also impressed by the chassis and how it complied on track – this would be great fun on a go-kart track! The Ather 450X tops out at 90kph on the speedo and so we knew it was going to be the slowest vehicle we’ve tested on the 3.74km circuit. However, a sub 3-minute lap is still pretty impressive. Fun to ride, with immediate torque delivery and stable chassis. Perfect for the city.

Honda seemed to have been betting big with the Hornet 2.0. We witnessed the launch event virtually, but the bike’s promos were largely shots at the Buddh International Circuit. Contrary to the image that it projects, the Hornet doesn’t really shine out on a track. Rajini said the bike had a capable chassis, but it was let down by the modest power and torque figures that it produces.

He also mentioned that he quite liked the way the bike was styled, with its aggressive lines and golden coloured forks. When we told him about the bike’s pricing, he said that it may cost as much as a 200cc motorcycle but its laptime doesn’t match. 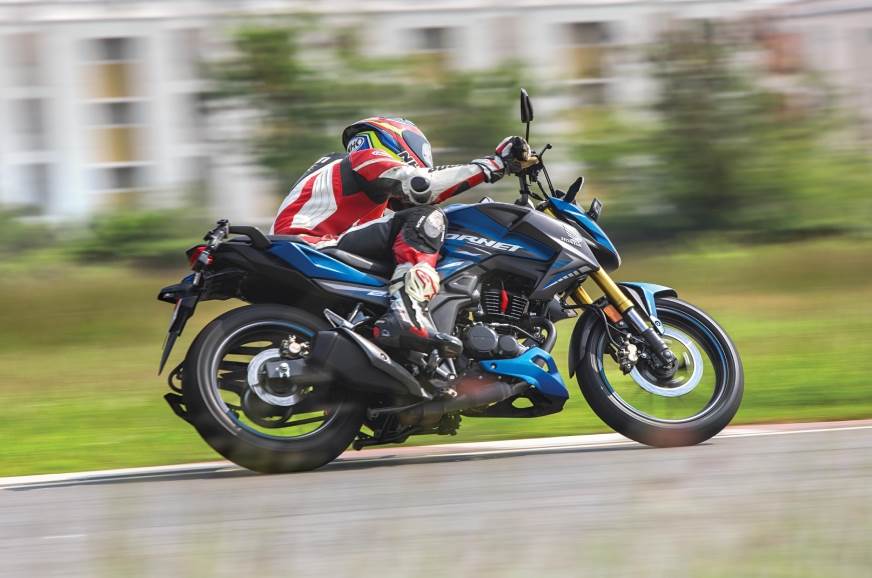 Stand-out looks, good equipment and handling, but performance is a let-down.

Last year, the then-new Bajaj Dominar 400 was on our line-up of motorcycles for the track day but with its touring oriented ride, it failed to leave a lasting impression on Rajini. Its younger sibling seems to have done a better job, despite sharing a lot of its design and ergonomics with the Dominar 400, and that was primarily thanks to the impressive 250cc engine.

However, the 13hp deficit in power meant that it was 4.64s slower than the bigger Dominar. Rajini also said the front end felt a little too light out on the racetrack, which is no surprise, considering that the Dominar does not have a forward-biased weight balance. He did say the engine was really smooth and tractable, and that it would make for a nice, comfortable street bike. Too soft and heavy for the track, but the touring guys will enjoy the smooth engine.

The Gixxer SF250 was missing from our track day line-up last year so we got the BS6 version for the 2021 event. After a couple of fast laps, Rajini felt it was better suited for the road. Why? He felt the foot pegs sat too low – in favour of better road comfort – and this caused them to scrape quite easily. It doesn’t take a multiple-time national champion to feel this; even when we took the bike out on track, we did scrape the pegs quite a few times.

He was also put off by the low windscreen and felt the bike definitely needed better wind protection, whether on track, or out on the highway. On the plus side, Rajini did mention that, with a few tweaks, this would make for a great One Make Championship race bike. 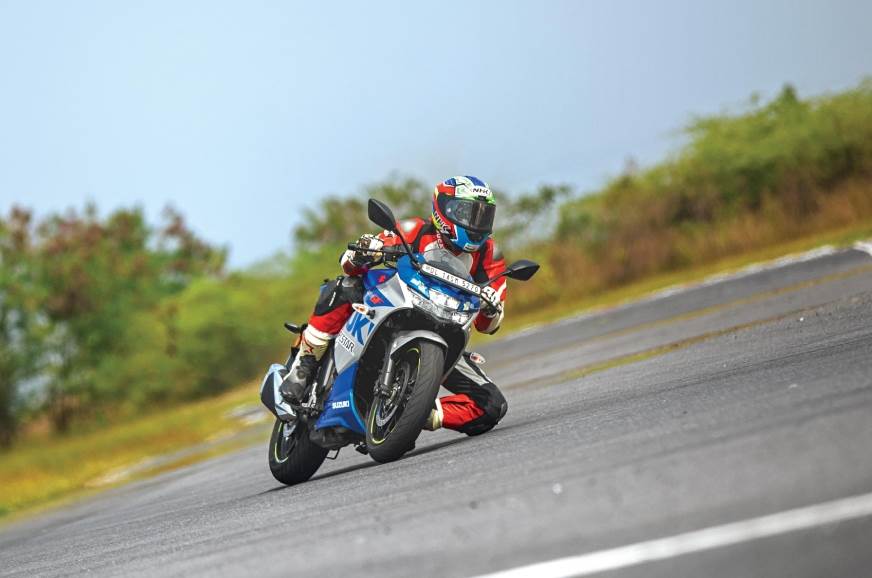 Needs more wind protection, but with a few tweaks, it will make for a nice beginner track bike.

Another bike that's returning this year is the BMW G 310 R. Its latest update also saw the addition of a ride-by-wire throttle and a smoother BS6-compliant engine. Thanks to the track conditions this year, it was 1.47s slower than the model it replaces, but it feels a lot better. The vibrations that plagued the upper end of the rev band have been dealt with and Rajini was also impressed by the punchy low- and mid-range torque. On the downside, he felt the front end dived too much under braking and also didn’t inspire as much confidence going into a corner.

At the end of the day, this is a motorcycle whose aerodynamic and ergonomic setup are meant for the streets. If you’re looking to frequent a racetrack, the fully-faired TVS RR 310 that uses the same engine would make for a sweet track machine. 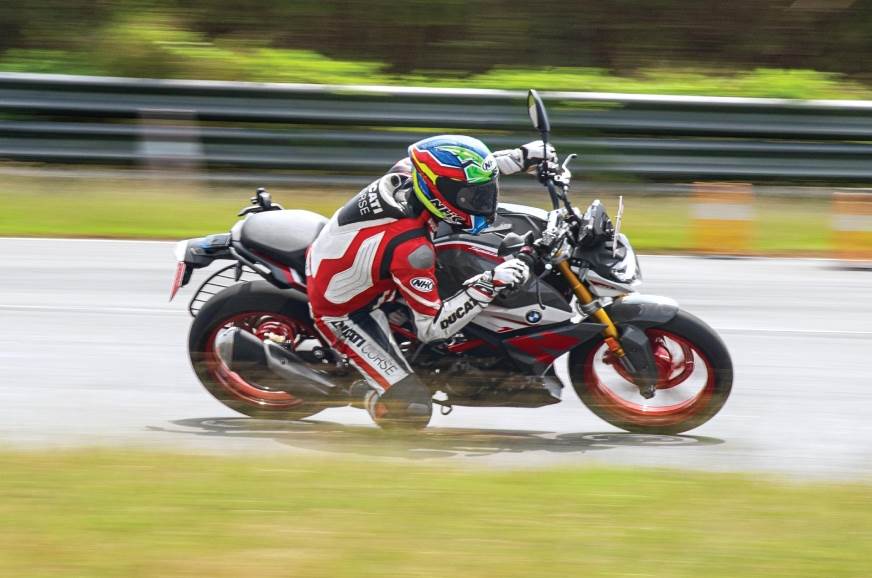 Good engine, smooth torque delivery in every gear. However, the fork is too soft and the front end lacks feel.

The F 900 R was probably the motorcycle that Rajini was least impressed with this year. Here’s why: the Bimmer’s parallel-twin engine revs quite freely and short gear ratios meant he kept running into the redline too quickly for the track.

The fact that it misses out on a quickshifter only made matters all the more difficult. He also mentioned that the way the bike was set-up, in general, was largely biased for the street – the steering was heavy and the bike demanded effort to change direction.

Rajini mentioned that for the price tag it carries, it should offer a more comprehensive electronics package, at the very least.

Having said that, he did agree that the F 900 R would still be desirable, thanks to its attractive looks and the badge it wears. Lots of torque, but it’s quite heavy and the price warrants better electronics.

Yup, we were just as surprised as you are! The Multistrada 950S clocked a quicker time than the BMW. Alright, they’re separated by just 0.19s, but the fact of the matter is that it was the quicker motorcycle on the day. The Ducati also had the numbers in its favour, making 8hp and 2Nm more, but that doesn’t take away from the fact that this is a remarkably versatile motorcycle.

Rajini isn’t one for touring motorcycles, and just like with the little Ather, he wasn’t thrilled at first, but came back surprised by how well the bike handled and how responsive the engine was out on the track. He also went on to say that this is a motorcycle you could do pretty much anything with – ride it in the city, head out on a highway, do a little bit of off-roading, and like we just found out, take it to the track! 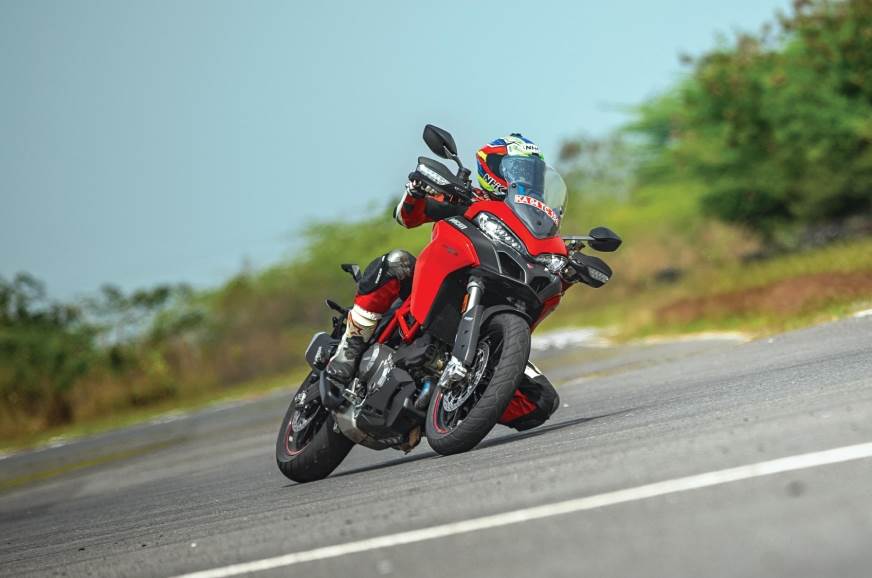 The Street Triple RS is one of the all-time heroes at the Autocar track day, and its laptime in 2018 embarrassed even some litre-class superbikes. The Street Triple RS comes with top-shelf suspension and brakes, along with super sticky Pirelli Supercorsas. The 2020 edition brought in a few more features and we wanted to see if this made any difference on track. Unfortunately, this year’s track conditions meant that the Striple couldn’t beat the previous time.

Rajini did mention that the power delivery with the Euro-5 compliant engine isn’t as immediate as it used to be – something that the rest of us actually preferred. He also found that traction control restricted him from fully accessing the bike’s power on certain sections of the circuit. The Itaian from Borgo Panigale has done it again. The V2 keeps the Panigale flag flying high by setting a laptime that’s just 3.83s off the V4. Yes, that’s almost a lifetime on the racetrack, but consider that this Panigale makes about 60hp and 20Nm less, while essentially weighing the same, and you’ll find yourself appreciating what it’s capable of.

Just like its bigger brute of a brother, the V2 is an all-out track machine. Every aspect of it has been designed and crafted with the sole purpose of going faster around a circuit. And go fast, it did. Given that the MMRT is a tighter circuit, we knew the Street Triple RS and V2 would be close, but at the end of the day, the Ducati edged ahead.

Rajini, like most professional racers, likes for the electronics to be turned down to the least possible settings. So, with wheelie control, traction control and ABS set to low values, it took little time for him to get comfortable on the V2. He expressed how the electronics were fantastic, and even though they were busy at work managing slides in and out of corners, or with any small errors he made, he never noticed them intervening. He felt that the main downside of the V2 was that it was running the OEM street tyres – Pirelli Diablo Rosso Corsa II – and felt he could shave off at least a second with grippier rubber like the Supercorsas that come standard on the Triumph. And for someone who’s spent a large amount of his racing years on litre-class inline-fours, he wasn’t a big fan of the sensations and vibrations this near- 1,000cc twin produced.

With a better suspension setup, grippier rubber and a little more time atop the bike, it’s very possible that Rajini will be able to set a sub- 1m 50s lap; that’s a seriously fast timing, even for a litre-class 200hp machine – a true testament to the V2’s capabilities. 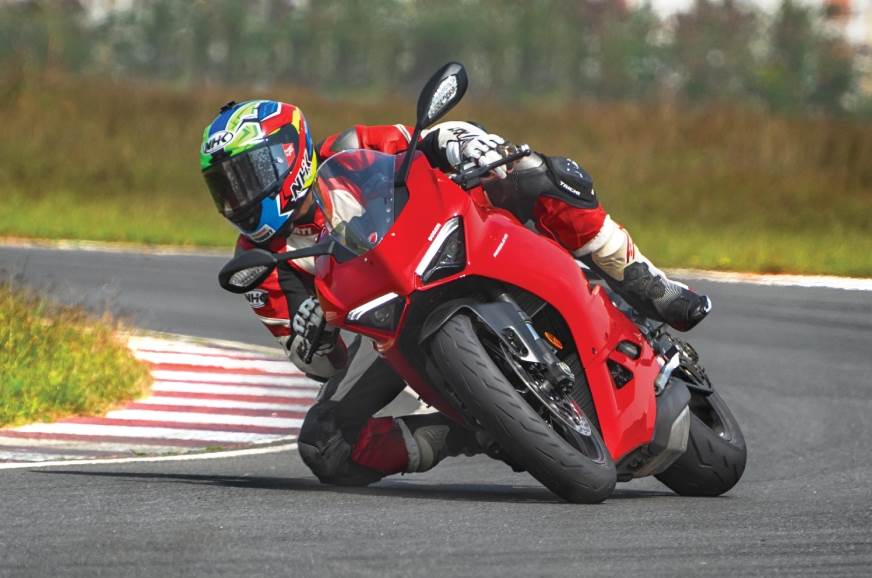 Enough performance throughout the rev range. Deserves better tyres for the track.