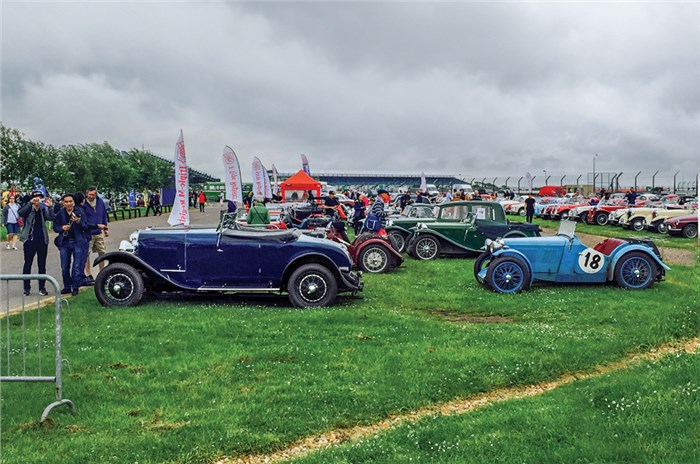 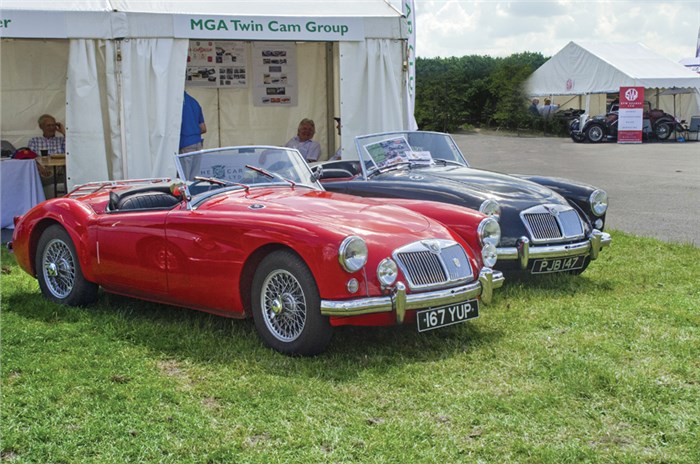 The stunning lines of the MGA are even more alluring today. 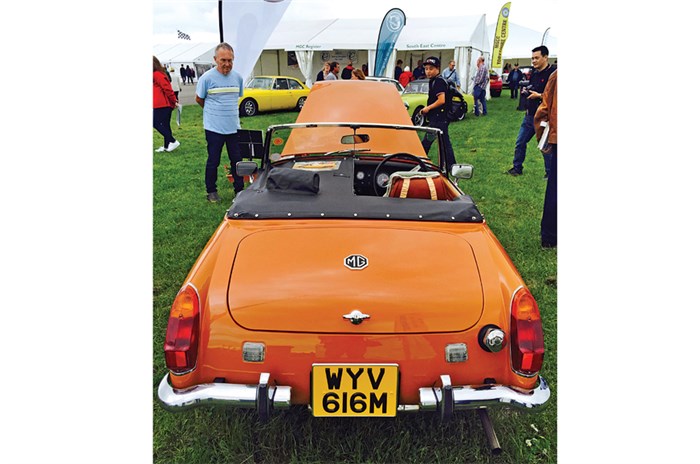 The Midget nameplate returned in ‘61; this car loves to be driven sideways. 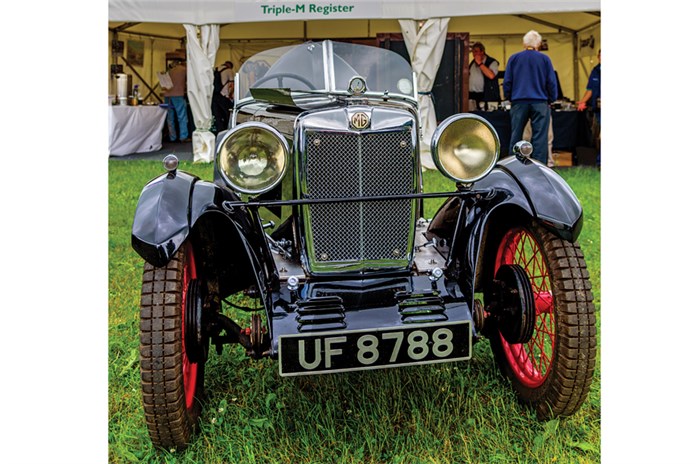 The M-Type was one of the cars that stared it all.

With the Shanghai Automotive-owned MG set to make an entry into the Indian car market next year, we take a look at its rich heritage via the ‘MG Live’ meet at the Silverstone circuit.

Few brands are as well-connected with their audience as MG. Predominantly a maker of sporting cars, MG was born out of the then-super-successful English carmaker Morris Motors. Initially only a service outfit, Morris Garages (MG), soon morphed into a maker of sportscars when the man in charge, Cecil Kimber, realised he could sell specially modified versions of Morris cars for a bigger profit.

The first MG, way back in 1924, was a sportier version of the famous Morris Bullnose. The first ‘proper’ MG, however, was the M-Type (or the Midget), a car that pioneered the classic upright-radiator, bicycle-fendered lines. This is the car I search for first on Silverstone’s grassy infield, where most of the MG Live event is held. One of the first genuinely affordable sportscars to be manufacutred, the M-Type was produced using humble but modified mechanical bits from the 1928 Morris Minor. It was a delight to drive, and MG even made a supercharged version that enjoyed a lot of sporting success. A long line of successors followed – C-Type, D-Type, F-Type and the famous K-Type Magnette, the latter primarily used for racing. 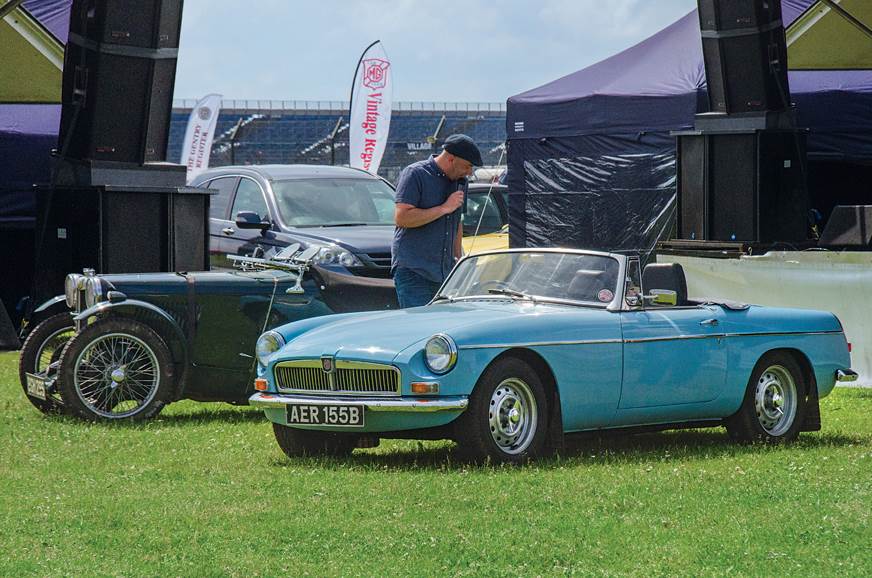 Sky blue MGB in the foreground was a bestseller.

A new version of the Midget, known as the TA, was introduced in 1936 and that too was followed by a long line of successors such as the TB, TC and TD. The T-Type, just like its predecessors, was very popular among Royal Air Force pilots of that time, and many of the later versions were imported into India, as well. What I didn’t quite realise was the bewildering array of variants the traditional MG was produced in. MG Live was a sort of voyage of discovery.

One of the highlights of the trip for me was riding shotgun in a TF around the Silverstone circuit with someone who had raced one for years. Don’t let the bicycle-thin tyres, slim fenders, uptight body work and vintage grille fool you – the TF is surprisingly rapid around the circuit, and the car hangs on to corners with a fair amount of resolve. “Gets the fundamentals right,” says its owner, John, above the wind noise, as we carve up Maggots and Becketts. 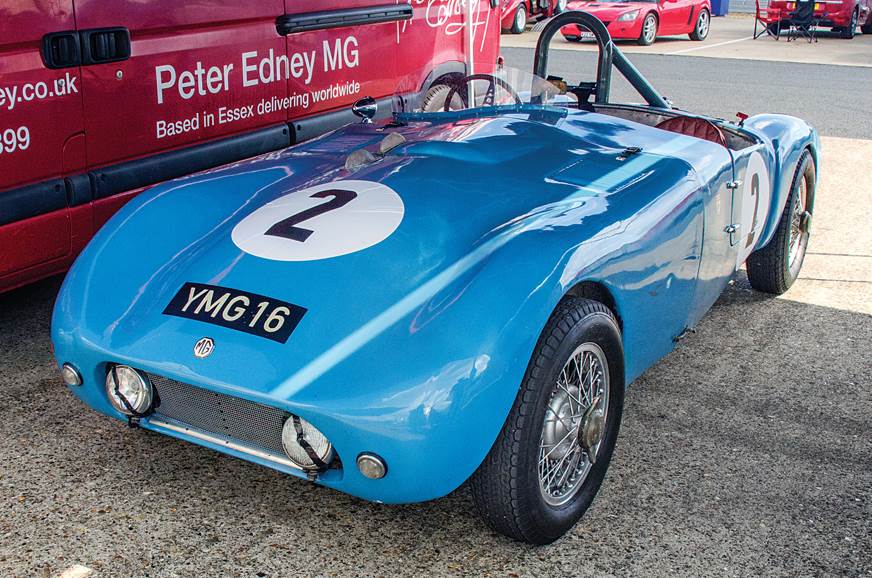 The evolution to the lower-slung and very attractive MGA followed in 1955. What the stunning lines and immaculate body work however hide is a true sporting intent that’s born of years and years of track work; these cars are a delight to drive, despite their humble 1,600cc engines and mechanical components. 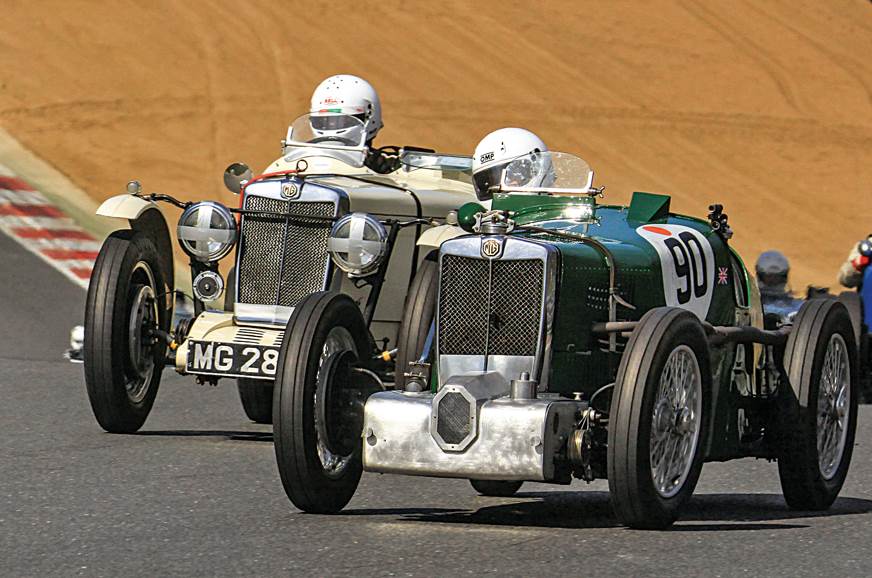 M-Types or Midgets battle it out on the track.

Then in 1973, MG took it to the next level by shoehorning the Buick-based Rover V8 into the engine bay. It helped that this was the lightest mass-production V8 around at the time. What made them a delight to drive was that some cars had upwards of 200hp.

What also added immensely to the appeal of the MG Live event was the carnival-like atmosphere and the race weekend-like environment. There were stalls selling parts, old workshop manuals, models and even full cars. How about a clean-looking MGF for just £2,000? 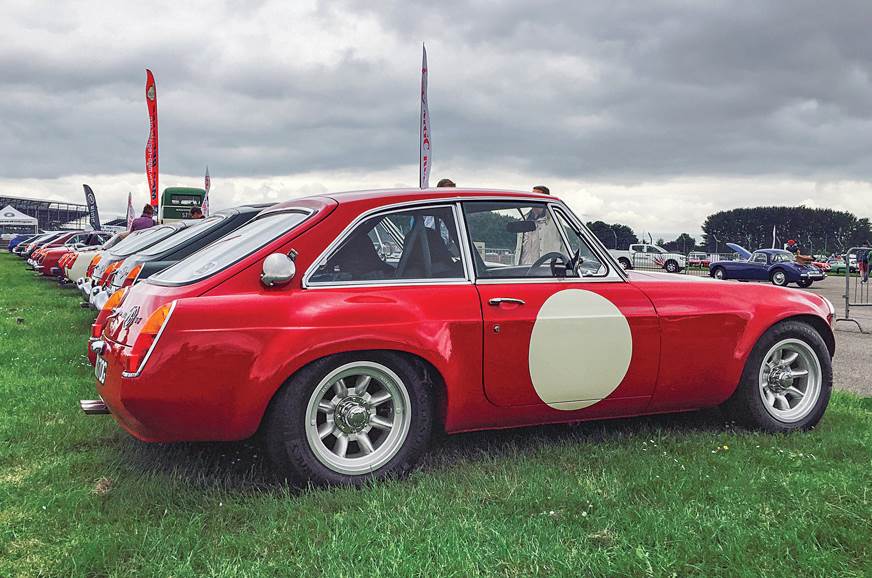 A race would happen every hour, and for those interested, there were food stalls, a stage for bands, and talks by MG experts from the MG Car Club. It was estimated that there were 3500 MGs at Silverstone during the weekend, with more than 10,000 club members in attendance – and that’s apart from the massive crowd.

Boring old Morris, one of the biggest carmakers at the time, sure did redeem itself by building the MG brand, all from regular mechanical bits. Come on Maruti, there’s even plenty of money to be made here. 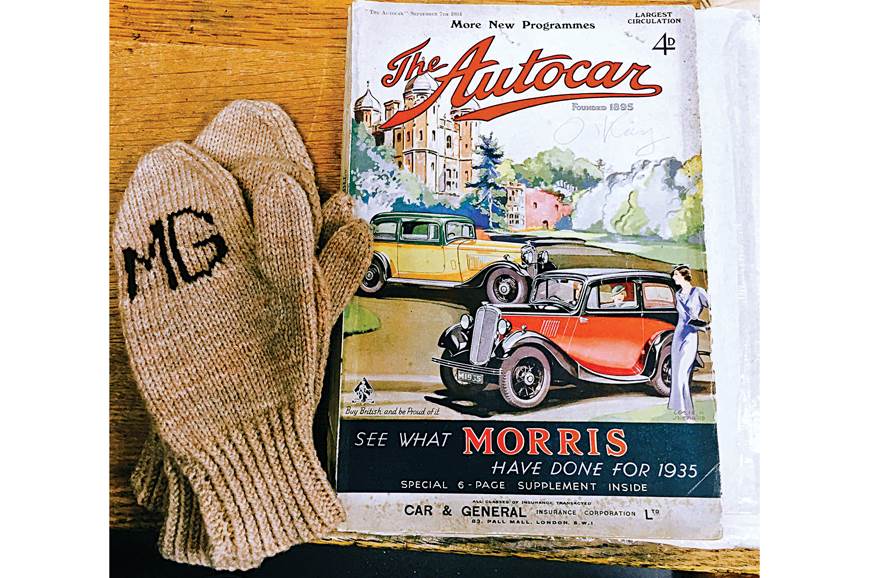 MG may have  started life as an offshoot of Morris in the UK, but the brand today belongs to Chinese carmaker SAIC. Associated with both GM and VW in China, Shanghai Automotive (SAIC) is one of the world’s most successful carmakers. In 2017, the group, through its JVs and its own brands, produced 6.9 million vehicles – more than twice the total volume of cars sold in India. This, of course, gives the group massive financial muscle, something it will use to the fullest when it makes its entry into India as MG. The first vehicle expected to hit the roads in the first half of 2019 will be a re-engineered version of the Baojun 530 SUV, a Toyota Fortuner-sized vehicle that MG is likely to sell at the price of a Hyundai Creta. One of the highlights of MG Live was a stunt show by driver Russ Swift. Now 67, Russ still has all the energy of a spring chicken. His enthusiasm is just infectious and he’s forever doing something crazy behind the wheel; handbrake turns, driving on two wheels, getting the audience to participate. We even got a ride in the back of the ZS. . . while it was on two wheels! 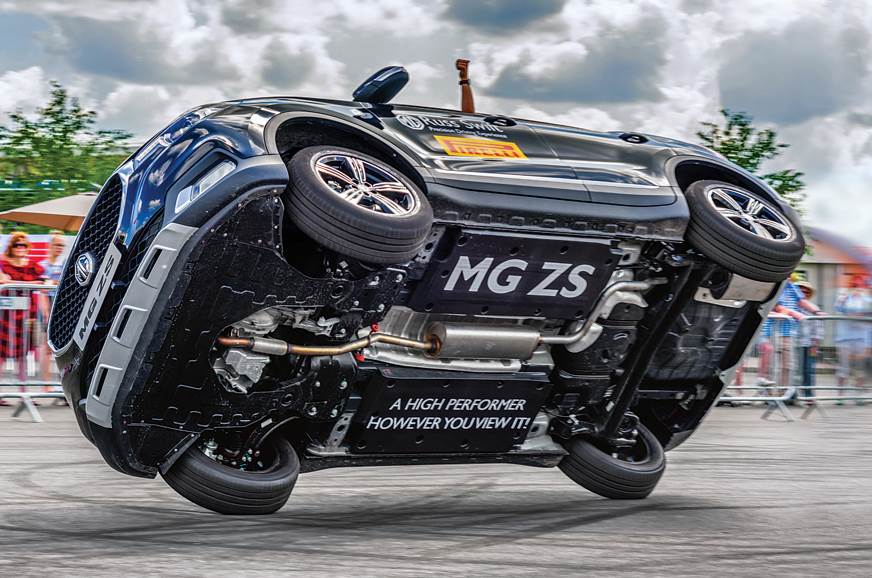 Russ Swift drives the ZS like it’s a two-wheeler.