24 SUVs, 56 participants and one peak. We join the convoy for the 2018 Mahindra Adventure - Summit Drive to the Mt Everest Base Camp. 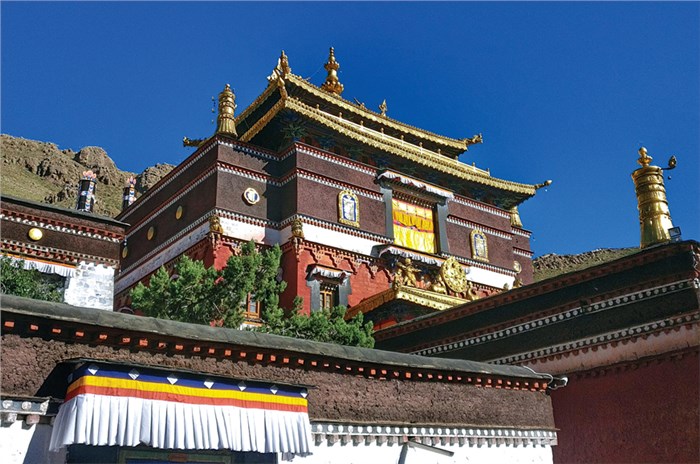 In Tibet, all that glitters is gold, quite literally. 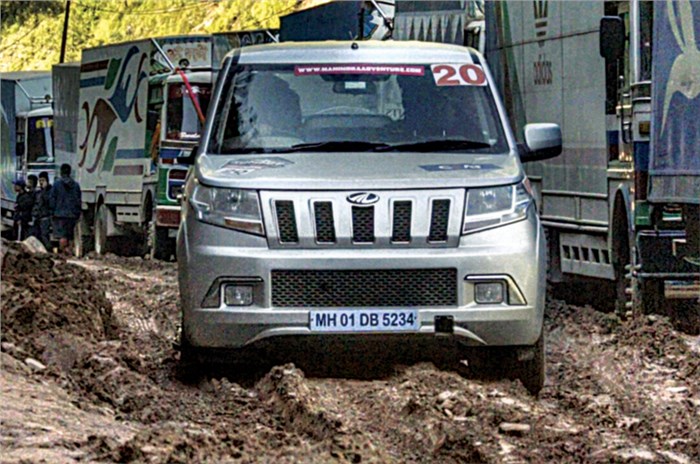 There was more than one occasion on which we missed the low-range gearbox. 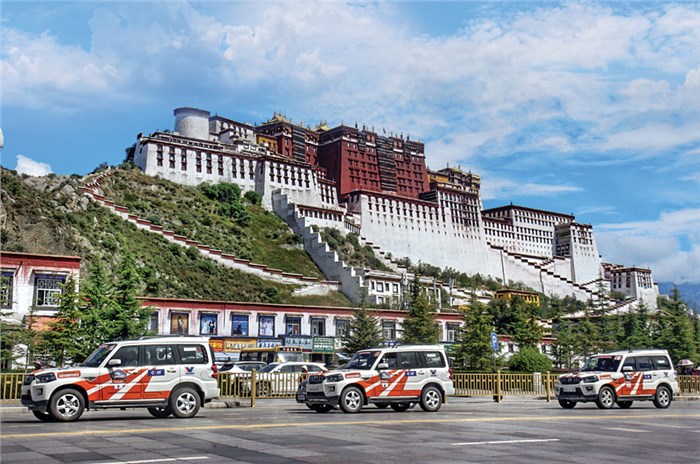 How often have you thought of getting in your car and driving away from the chaos of everyday life? Drive for miles, far away from your cluttered desk, your angry boss, the never-ending deadlines, the boring PPTs and the constant stress – sounds like the stuff of dreams, doesn’t it?

Participants at the 2018 Mahindra Adventure Summit were about to live this dream through a fantastic 12-day drive to the Mount Everest Base Camp. What better location for a getaway, right? EBC, as it is commonly abbreviated, was the arguable highlight of this trip which began from the beautiful city of Kathmandu, in Nepal. 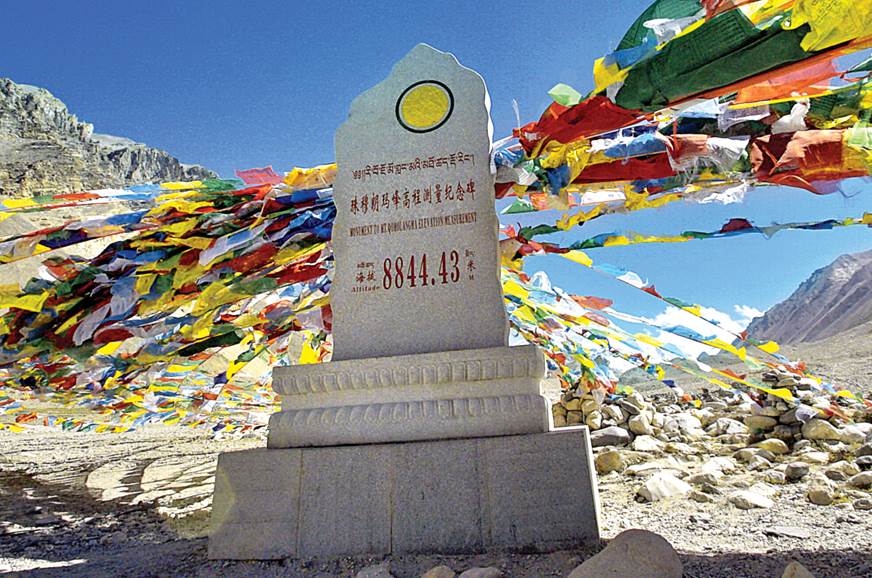 We landed in Kathmandu and the very first sight, before we even entered the hotel, was the entire fleet of Mahindra SUVs wrapped in the classic white-and-orange Mahindra Adventure livery. The agenda on the first day was simple – get to know your best friends for the next 12 days. 24 cars and 56 participants from various parts of India (some even from the world) and ranging between 6-60 years of age introduced themselves in the most enthusiastic fashion. There was tremendous energy and after a sumptuous dinner with some lovely folk performances, we got some shut-eye before the big day.

The first part of our drive was a short 117km drive to Syabrubesi; or so we thought. “Exiting Kathmandu is a task in itself”, said Rewat, our guide for the drive. Before that, however, we were assigned our designated SUVs, and as luck would have it, amongst all the 4WD Scorpios and XUV500s, I would be in the only 2WD SUV in the convoy – the TUV300 Plus. Needless to say, a convoy of 24 SUVs navigating through a busy city was quite the sight. From the moment we left the hotel, all eyes were on us. We soon left the hustle and bustle behind and were now on a lovely winding road enveloped by forests and beautiful river streams running alongside. Along the way, a plethora of pictures later, we reached our lunch stop in Dunche. After a nice homely lunch, we resumed driving towards Syabrubesi. Eventually, the smooth winding roads began to disappear and on the last leg of the day, we were on proper broken B-roads until we reached our destination for the night. 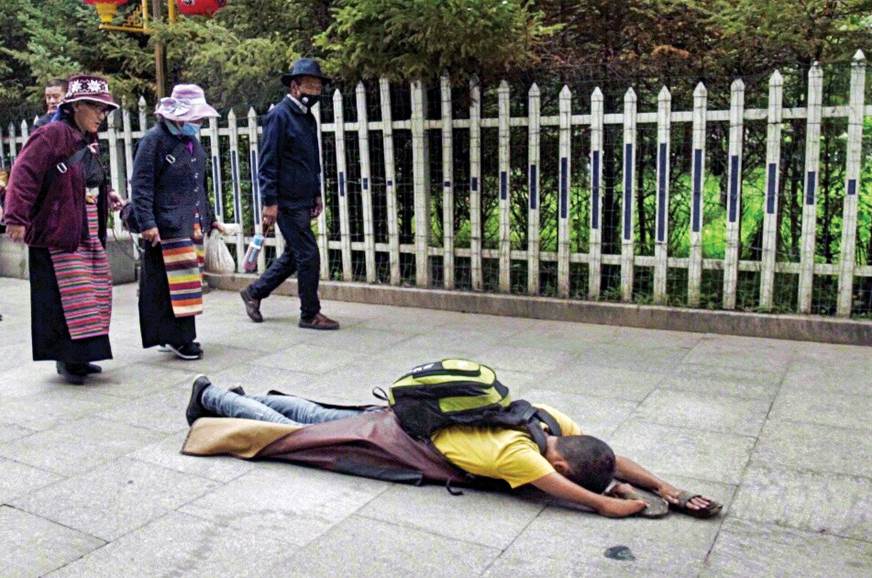 More than 95% of Tibets population is religious.

The next leg was the drive to Kyirong Town; a small town 24km into Tibet. Before that though, we had to complete all border-crossing formalities like immigration and security, which were expected to take up most of our day. Also, to make matters worse, the road to the border had just been taken out by a landslide so all that was left was a narrow trail filed with big boulders. This meant fun for the ones in the 4WD SUVs, but for us in the 2WD TUV300, it was not an easy challenge. A few cringe-worthy scrapes later, we managed to crawl away and drove straight into the no-nonsense China immigration.

A small change after getting into Tibet was driving on the right-hand side of the road. It took a while to get used to this and overtaking was slightly tricky too thanks to our right-hand-drive SUVs. As expected, by the time we reached the hotel in Kyirong, everyone was exhausted. At dinner, we met our local guides in Tibet, who explained some of the rules and ethics about the country to us, and also advised us to restrict our physical activities until we get acclimatised to the weather. 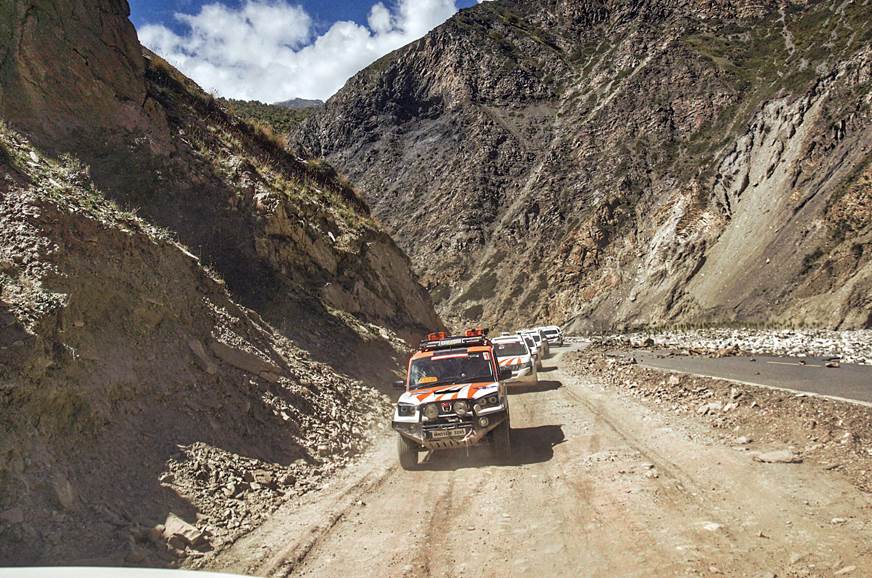 The third day started with our drive to the town of Saga, 170km away. Now, these distances might seem short, but mountain roads are notoriously famous for crushing ETAs – although they make up for it with the stunning backdrops. The valleys, landscapes and even the passes are an absolute treat for the eyes, and visuals like these completely take out the stress of driving. We drove alongside the mighty Brahmaputra river and basked in its beauty before reaching the hotel where we’d be staying for the  night. We were asked to get as much rest as possible, as the next day was going to be a much longer drive.

The following day had the longest distance on the entire trip – a 415km journey that consisted of five mountain passes, including one that was over 4.5km above sea level. Here, we got our first glimpses of the famous yaks and herds of sheep grazing peacefully as we pierced through the scenic countryside waving past the shepherds. As we climbed up though, the symptoms of altitude sickness started creeping up. A few participants started experiencing dizziness and nausea and the SUVs took a hit in performance, as well. However, the mighty enthusiasm helped us get on with it and the dusty road provided some fantastic visuals before we reached our lunch halt in Lhatse. We still had 115km until our destination in Shigatse, but a lunch break was a much needed breather for the participants and the SUVs as well. 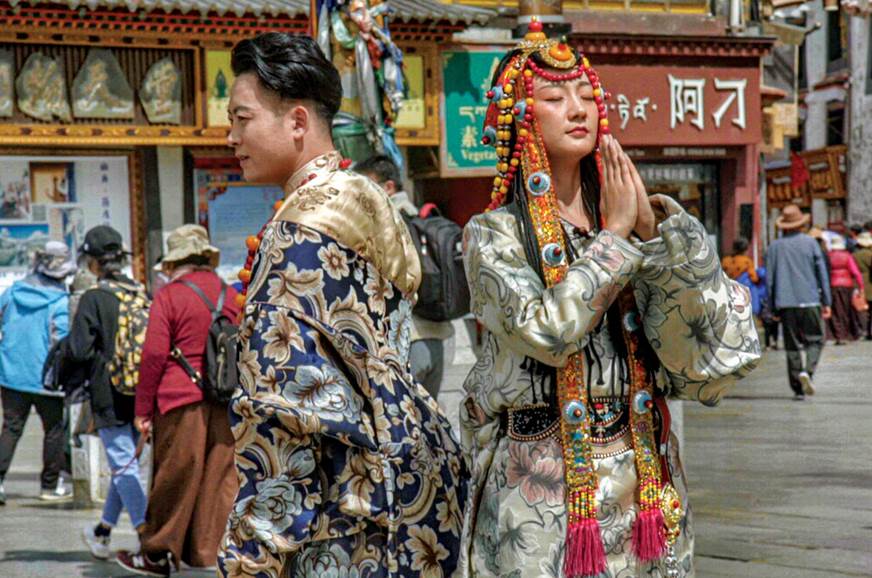 Silk robes with exquisite embroidery are a common sight in the local markets.

The next part of the journey started with an early morning drive, yet again, as we drove on to Lhasa, the capital city of Tibet. Lhasa, unlike most of Tibet, is a modern and upcoming city with posh hotels and the typical nightlife of a big city. Most mountaineers usually fly into Lhasa and head towards EBC from here. The drive took us through some fantastic visuals, one of which was the famous Lake Yamdrok. The azure water body is a manmade lake caused by a hydro-project, but is absolutely stunning to look at and is considered to be a holy lake by the locals. As we crossed it, we realised we were 5km above sea level crossing the Karo La pass.

Lhasa was one of the important highlights of the trip owing to its rich heritage sites. The famous Potala Palace, home to the Dalai Lama, has a grandeur that needs to be seen first-hand. It has over a thousand rooms, including the tombs of the Lamas. You also get an entire view of Lhasa from up here which shows the stark contrast of modern day architecture blending in with historic buildings and houses. After soaking in the mesmerising ambience of the palace, we headed on to the markets for some local shopping. 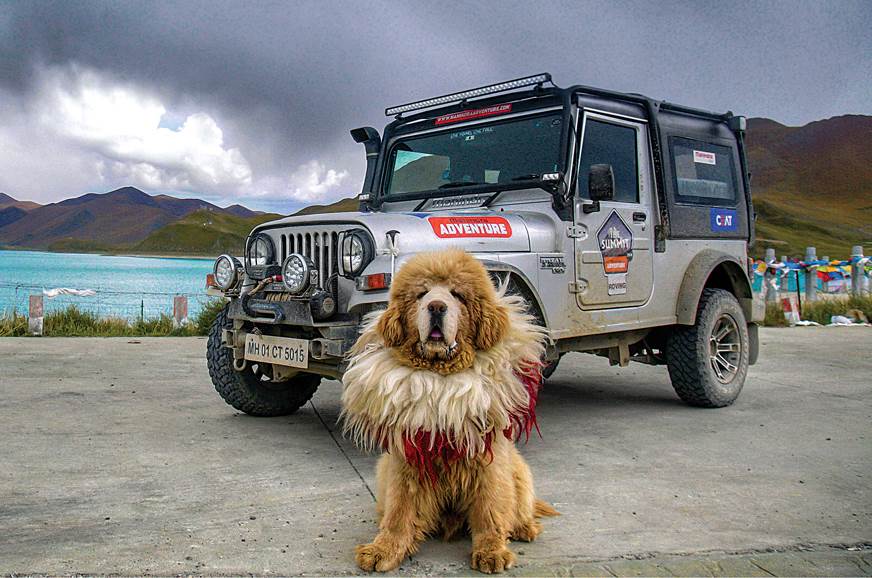 The Tibetan Mastiff looks nothing short of a small lion.

Now we’d been seeing all these great heritage sites, beautiful monasteries and some truly epic views, but each night at dinner I could hear hushed voices going, “How far is Everest?” and “when are we going to see Everest?” It was surprising to see the same level of excitement despite toiling away for days just for that one visual. The SUVs too were coping just fine – and come to think of it, the ease at which they managed the rather challenging terrain is half the reason we all could relax and enjoy the gorgeous backdrops out the window. Few SUVs can do what these Mahindras were doing.

After Lhasa, we were all getting impatient. We had seen the monasteries, seen the mountain passes, driven on winding roads and done proper off-roading. Now we all just wanted to fill our eyes with what many consider, ‘the peak of heaven’. On our way, we visited the Tashilhumpo Monastery of the Panchen Lama, founded in 1447 AD. Like all monasteries in Tibet, the opulence is beyond belief and once again reminded us of how well Tibet has preserved its national treasures. From here on, we drove 244km more to Shegar, which took us one step closer to Everest. To find a stream of water up here is a rarity. Needless to say, we made the most of it.

Finally, the day we had all eagerly waited for had arrived. We were to head to Rongbuk and from there to the Everest Base Camp. In Rongbuk, we got a teaser of the peak of Everest from a distance and it quite literally left us all speechless. But like all good things, we wanted more of it. The road connecting to EBC is properly off-road for around 60km which meant on some parts we would need to engage the low-range on the gearbox (for the 4WD versions) and ease into the massive ditches and potholes.

After tumbling and tossing about for a couple of hours, we made it. As soon as we got out, it was like our prayers had been answered. We got clear, uninterrupted skies and not a speck of cloud between us and the gorgeous snow white peak. There was an eerie calmness around as everyone was understandably in awe of this magnificent piece of nature. We walked right up to the end of the tourist base camp and filled our phones and cameras with every possible angle of the Everest. What made it more special was that we reached there just in time for the sunset. To see the sky change colours behind the peak was nothing short of magical. Was the rough, back-breaking, skin-cracking drive worth it? Absolutely! 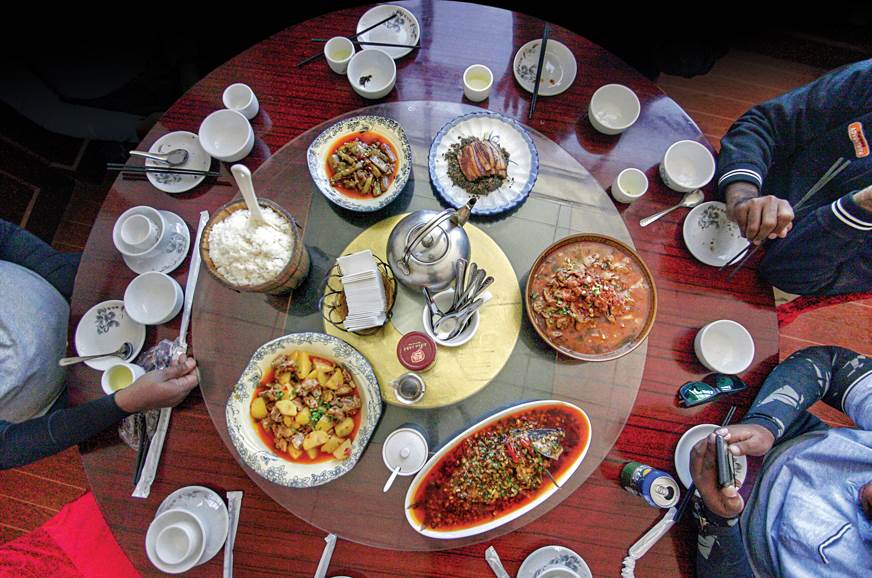 Food in Tibet might be simple, but packs a lot of flavour.

We headed to back to Kyirong town the next day and it immediately hit us that the drive was over. Even though we still had two days to bid goodbye, there was a hint of sadness lingering in the air.

We drove back into Kathmandu on the now familiar roads and celebrated the successful drive, new friends and a bucket-list tick-off. Each one of us experienced something special on this journey; but what really brought us closer was our love for driving. Like Buddha once said, “It is better to travel well than to arrive.” Sure, Mount Everest was the highlight, but the drive there was what made the entire trip worth it. 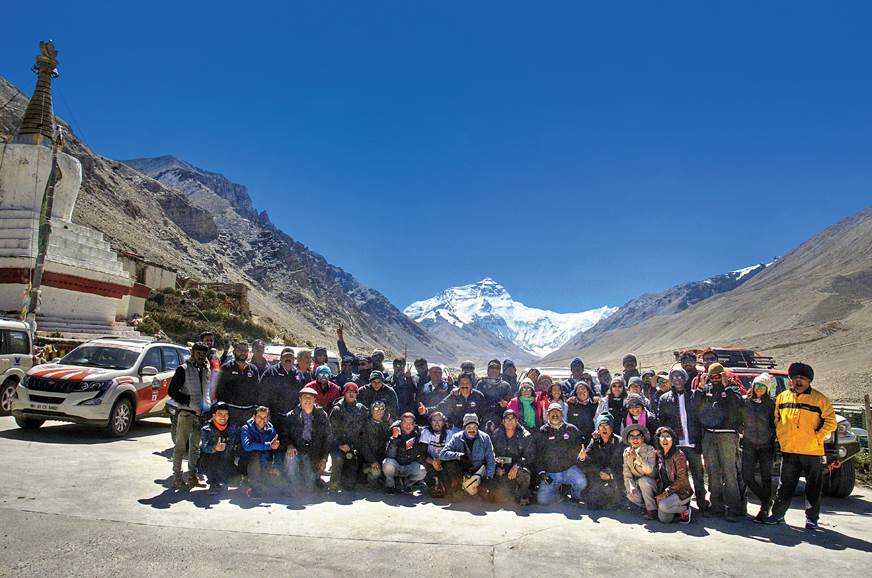 10 days of long drives and battling harsh weather – a complete sense of accomplishment.

CZAR OF THE ROAD

On long arduous trips like these, the most important part of your SUV are its tyres. CEAT fixed us up with a set of their tough SUV tyres, the Czar, and they truly impressed. Not a single puncture or even a cut in any tyre despite taking on some properly harsh terrain and absolutely flooring it on bad roads. On the loose soil of the mountains, the grip was also just enough as we never felt any slippage driving through all those tight hairpin bends. A true test though, was tackling the muck getting into Nepal and yet again, these Czars barely broke a sweat. 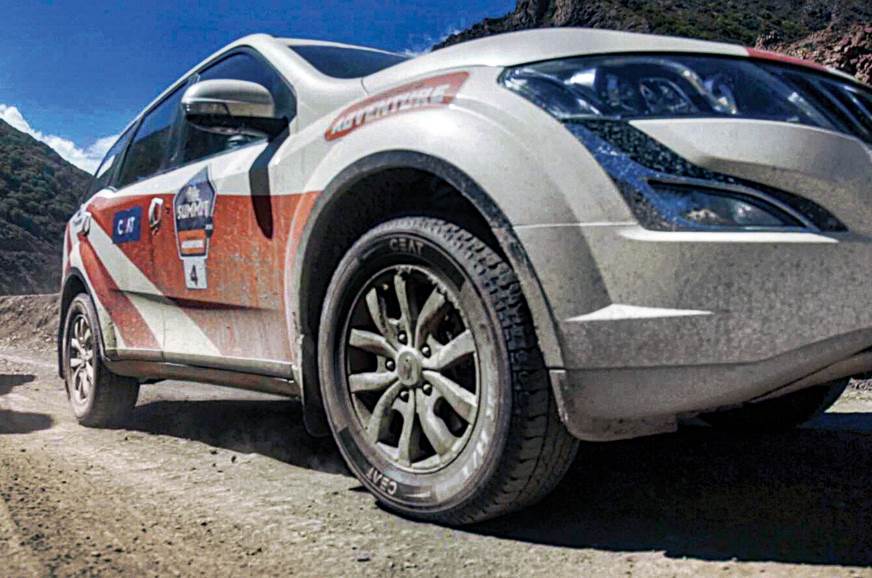