Two Italians. Two eras. We have ‘two’ much fun. 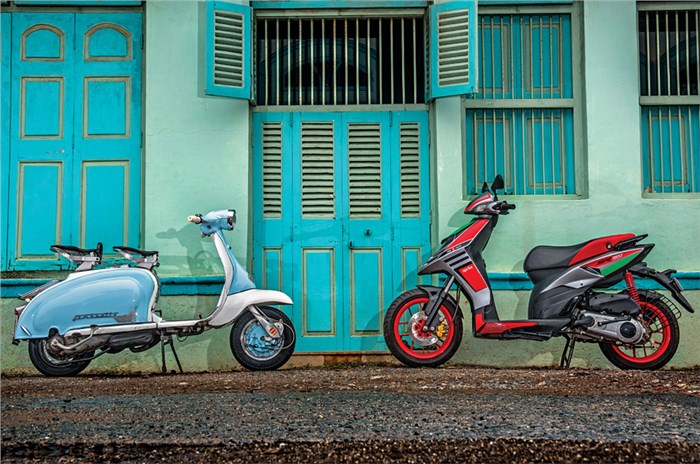 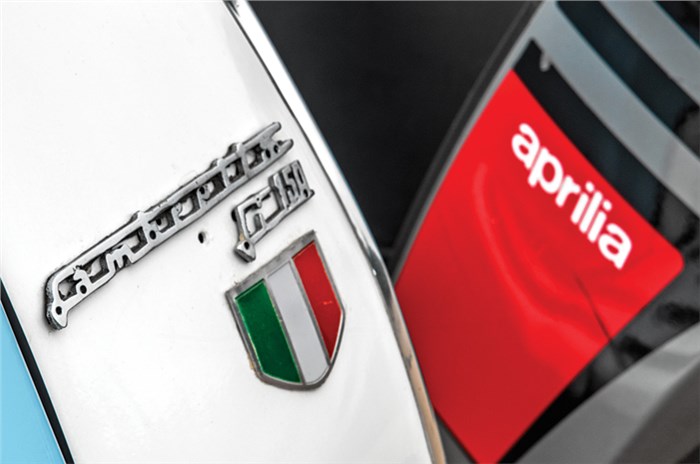 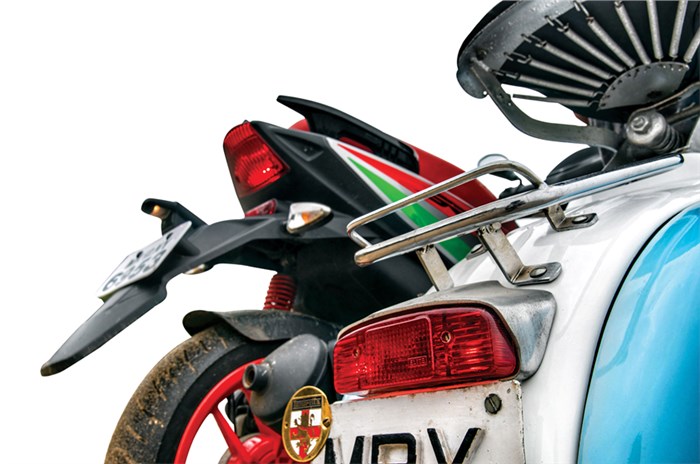 Bet you thought we brought the wrong scooter along for a comparison test! But that’s actually not the case. These scooters may look eras apart – and they are – but there’s a reason why we’ve brought them together; and, no, it’s not just because they happen to be Italian. This duo, separated by 56 years, did what few other scooters could do in their time – give motorcycles a tough time! This came with some compromises on practicality in the favour of style and fun, of course, but what else do you expect from a country as passionate as Italy?

One of these scooters, if you haven’t guessed already, is the Aprilia SR 150 that I borrowed and rode to Dahanu, Maharashtra, to introduce to the other scooter, the Lambretta Li 150. Why Dahanu? Well, that’s where the Li lives – it happens to be my own pride and the very scooter I learned riding on at my family farmhouse. 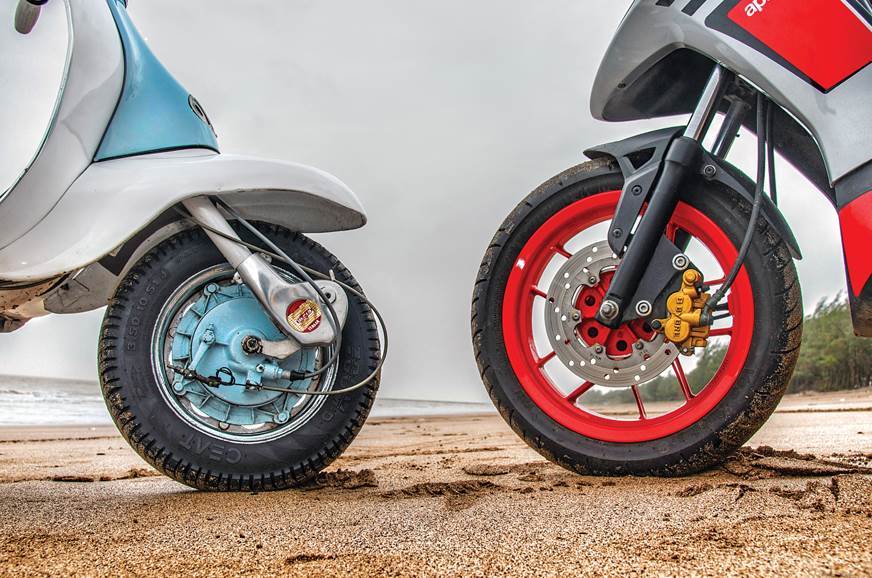 Large wheels are highlight features on both, for their time.

The Li 150 first came to life in 1958, with a headlight that sat on the nose. Mine, however, was produced four years later (1962) and its headlight resides on the handlebar. What gives away the model year further are telltale signs like the beakier mudguard and the round nose grille. The Aprilia here is a little special too and you can tell by its racing-inspired graphics that make it stand apart from the regular SR 150.

They may be separated by over half a century, but these two pretty scooters were built for exactly the same reason – to thrill. You see, scooters may seem dull and utilitarian, but they actually play a vital role in many young lives. All my colleagues and I spent the larger part of our teenage years riding scooters. These were the machines that gave us our first taste of motorised two-wheels and, more importantly, freedom. Tearing the throttle open on a scooter, all the way to the stop, quickly became muscle memory and we obliged at every given opportunity.

After all these years, the Lambretta is still delightfully dependable. It was lying unused for three whole months but promptly clattered to life after the second kick. It immediately overpowered the idle of the SR 150 (gruff by today’s standards but beautifully refined before the Lambretta) with its rickshaw-like exhaust note. While it isn’t the most hair-raising, two-stroke exhaust note out there, it did have a really nice perk – when it’s at high revs, people hastily move out of the way. 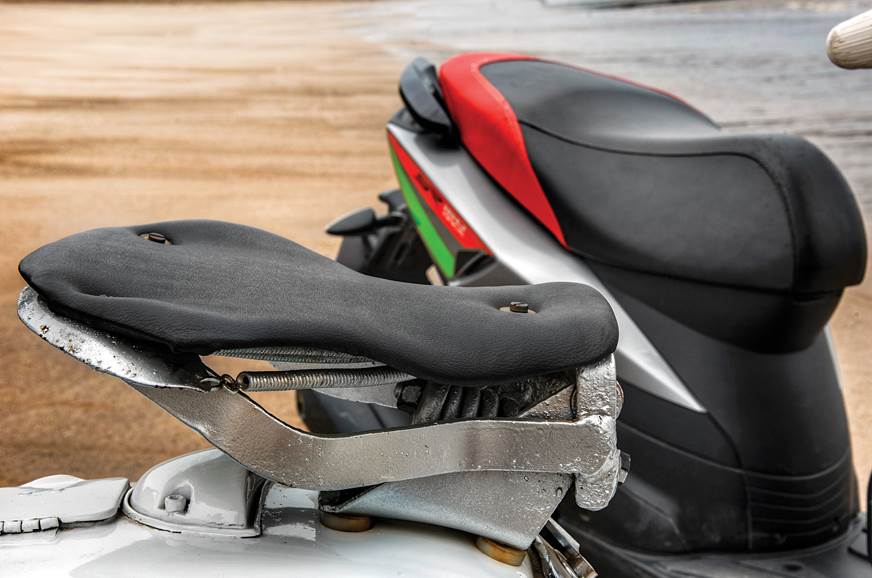 The concept of a seat has come a long way in all these years!

The Li 150 doesn’t accelerate as well as the SR 150 or even a Vespa of its period, but it is at home when it gets up to speed. Not surprising, when you consider that the Li 150, when new, made 6.5hp, which was a lot for its time. I’m always game for a revisit of my young, throttle-wide-open days, and what better way than to hoon around on a secluded beach. The Lambretta with its low-set handlebar, fluctuating headlight beam, and raspy horn feels old and brash but also oh-so-cool.

Come to think of it, the 10km blast we had ahead of us to the secluded beach was ideal for both these scooters. Our journey snaked through slender roads passing through the soulful part of old Dahanu that was built in the early 1900s. Funnily enough, the town and the people looked quite period-correct from the Lambretta’s perch. We scooted past encroaching vegetable vendors, collapsing houses, and cattle – our light-footed scooters, the perfect dance partners. And dance we did, primarily in an attempt to gracefully avoid every pothole that came our way. The simple trailing-link suspension on the Lambretta and the firm telescopic fork on the Aprilia are both unforgiving, to say the least.

Passing the last of the houses, we were instantly greeted by wider tarmac that smoothly flowed to the ocean’s edge. It was almost like we went through a portal made for motorcycle enthusiasts that ended up running alongside kilometres of alluring and seemingly endless beaches. This stretch of road finally allowed a taste of the Li 150’s fourth gear, which, strangely enough, can only be slotted into without using the clutch – one of the many peculiarities of this scooter. 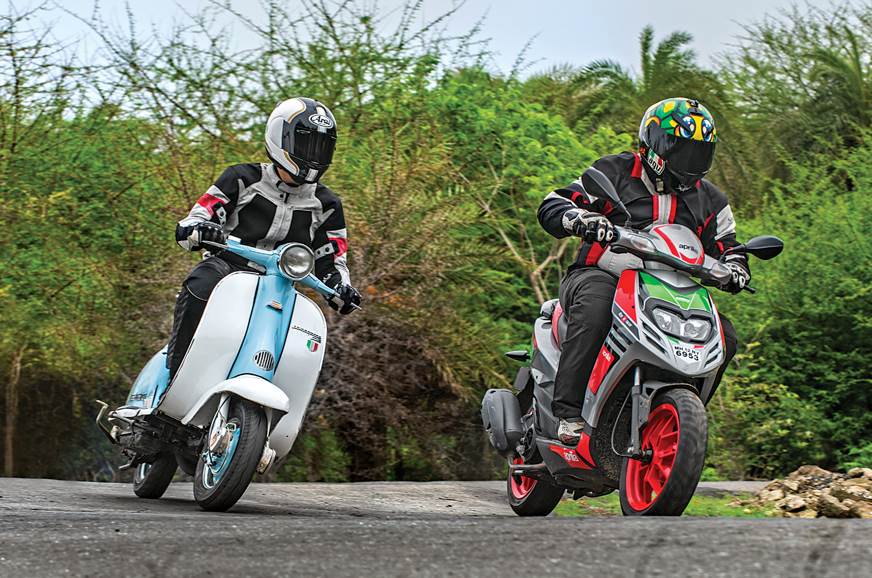 Both feel sure-footed and surprisingly quick through the corners.

Meanwhile, the Aprilia, being the fastest scooter in the country was merely using half of its potential and could leave the Lambretta behind at will. But I’m not surprised that Arun chose to calmly sit behind and take in the view; I would have too. That said, I am sure I was the one having more fun given that I was living an experience that most people could only have had if they were born in the ’50s.

We then approached a set of twisties and knowing that both these Italians were created to take them on really well boosted our morale. They are, after all, scooters with the largest wheels of their times. Yes, we didn’t carry MotoGP cornering speeds, but we were a hell lot faster than the average scooter. The Aprilia with its 10.5hp motor and grippy tyres was attacking corners in a way that would give many motorcycles a run for their money. The Lambretta, although much slower, felt sure-footed and surprisingly quick through the corners. The new, more rounded tyres I had recently installed were finally coming to good use. Another affirming quality of both scooters was how well balanced they felt. The majority of the weight could be felt at the centre and not on one side, like many scooters from this generation were prone to. This was even something Lambretta was proud of back in the day; its biggest rival, the Vespa was notoriously right-heavy. Both, the Li and the SR, also had a lot more ground clearance than you would need on the road, but we weren’t out looking for dramatic lean angles that day. Speed breakers have never been an issue on either.

But, there was one last thing left to do – a drag race! We lined up both scooters and took off. A full-throttle launch on the SR wasn’t the greatest of ideas on the beach and it dug itself right in. The Lambretta, meanwhile, took off the line instantly. The smooth but slow acceleration meant there was no drama. The SR caught up with the Li when we were around 40kph and it never looked back. But for that first 40kph, the Lambretta and I felt on top of the world. 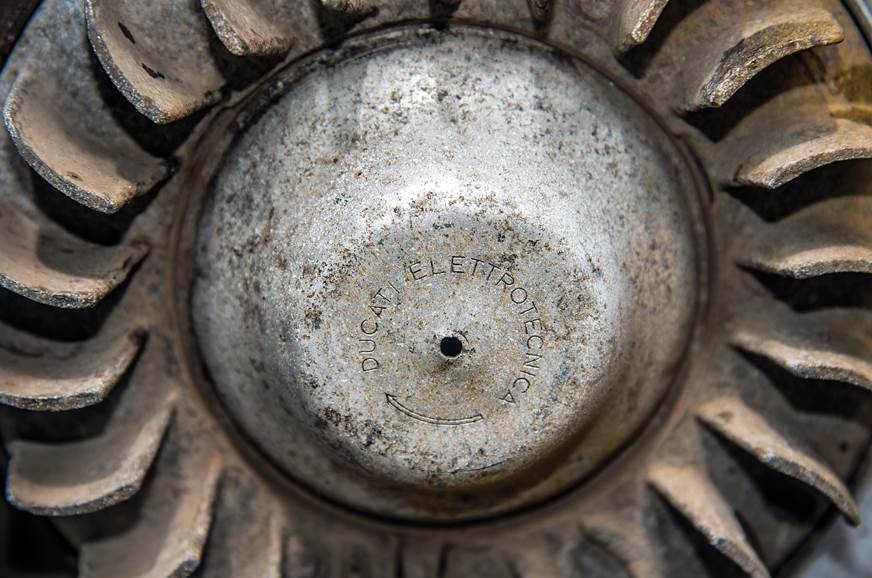 Ducati provided most of the Li’s electronics.

With the fooling around wisely wrapped up, we parked both scooters against the backdrop of the calm ocean and let the camera capture just how good the Italians are when it comes to style. Clearly, 50 years of evolution have been dramatic, and the smooth, flowing designs have been replaced by sharp and edgy bodywork, but even here there are similarities. The beaky noses on both scooters, for example, do a fine job at exhibiting the large front wheels. Furthermore, the slim profiles on both scooters aren’t just to make them look sleek and sporty, they also help with squeezing through the kind of gaps any good scooter should. While the seats on the Lambretta were originally made out of a thicker, more comfortable material, I had replaced mine with a more bare-bones seat that puts the spring mechanism on display. The SR 150, as you would expect, has a modern-day one-piece seat that is pretty supportive, and how can you not like that sporty red and black combo?

But when it comes to the rear, design philosophies have changed enormously. During the Lambretta’s time, it was frowned upon to put mechanical components on display. The tail comes swooping down so as to hide half the motor, half the rear wheel and other parts like the airbox. But, on the SR, it’s quite the opposite; the tail points skywards and the scanty side panels proudly put the mechanicals on display. This is a design change that has come about to add to the sporty styling, while also taking away a lot of weight. This dramatic change in body style, however, drastically reduced the legroom for both, the rider and the pillion. The legroom on the Lambretta, on the other hand, consistently surprises any rider or pillion who is privileged enough to get on my scooter. 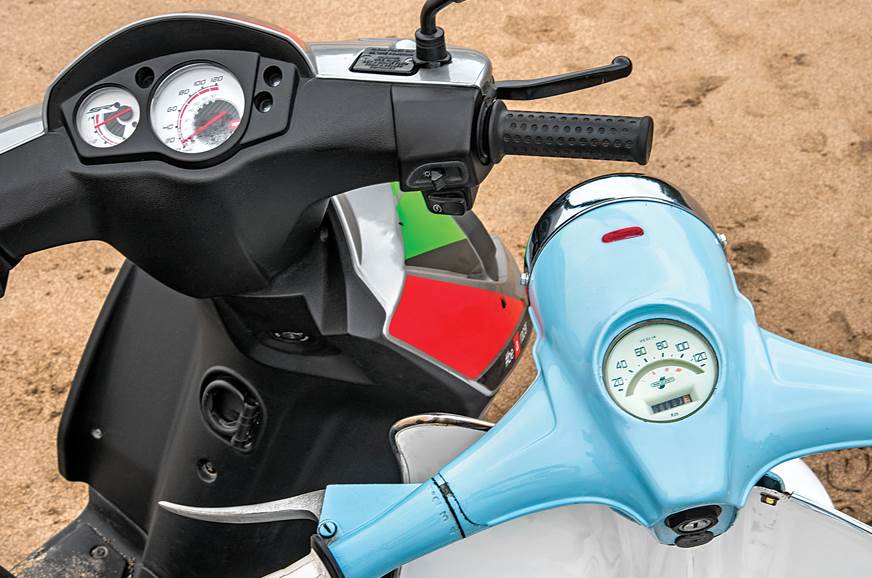 The SR persists with analogue gauges even now.

Another huge visual aspect is how modern-day graphics have made it acceptable to use multiple colours on a bike. Back in the ‘60s, a two-tone colour scheme was the most audacious thing out there. And now, the SR flashes four different hues like it isn’t anything out of the ordinary. But they both stand together in their disregard for trivialities like practicality; they are delightfully stingy with storage capacity. Ah, the Italians. I also took this opportunity to open the side panel of the Lambretta and show my colleagues the components from some rather big brands hiding under there. Ducati took care of the electronics, Dellorto made the carburettor, and Sachs, the rear monoshock; all three of which are very well-known, especially in the world of motorsport.

As the day comes to an end, I realise it takes more than just passion to approach two-wheelers the way Italians do. The intention to thrill – which may have backed either’s conception – wasn’t necessarily out of competitiveness, but rather came from the Italians’ elementary school of thought – if it’s not fun, it’s not good enough. It’s no surprise, then, that both these Italian scooters put many motorcycles to shame in their respective eras. While scooters may get faster and racier with time, and emulate motorcycles more than ever before, this pair of Italians will eternally be, well, two of a kind. 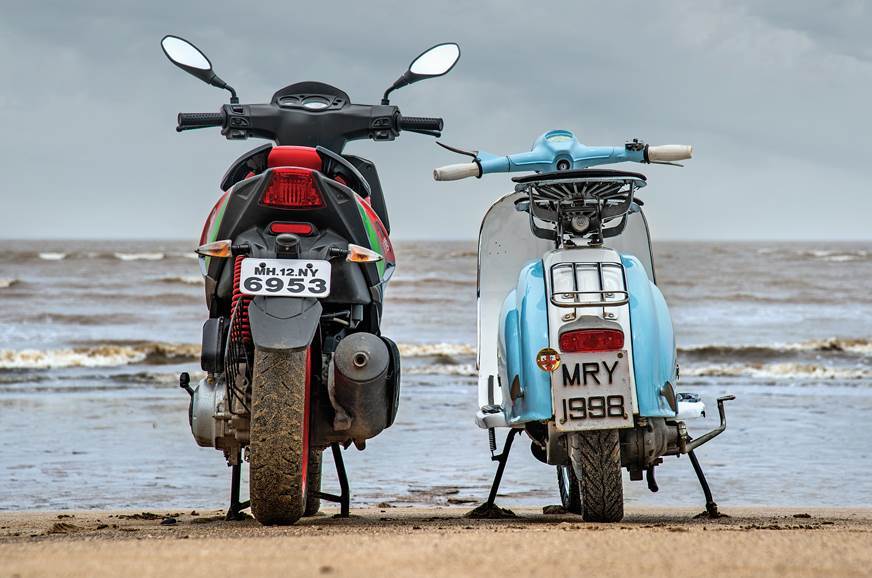