Sergius talks about how the Indian government's new policy on imported models could see cars like the Suzuki Jimny come here as a CBU. 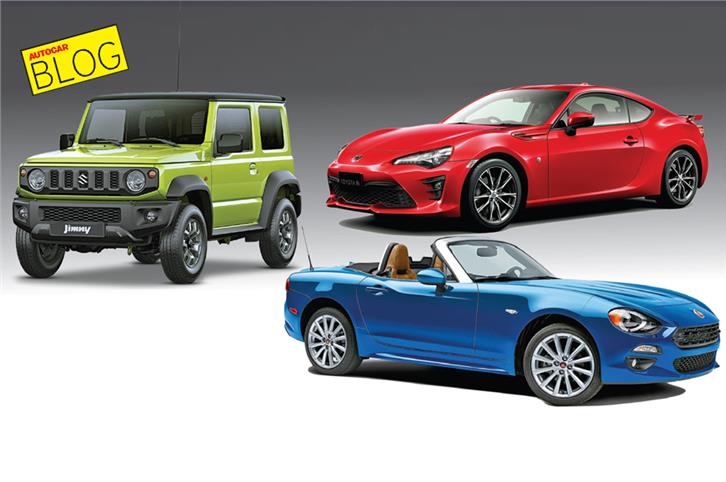 Thanks to the homologation waiver, cars like these could and should make it to our market.

We’ll likely soon be seeing passenger vehicles imported into India without homologation. This is provided, of course, that they are right-hand drive and compliant with international standards, specifically the EEC, ECE or Japanese norms. Further, there’s a limit too; only a maximum of 2,500 units per year, per company would be allowed. Expectedly, talk is flying thick and fast about the kind of cars we’re likely to see and naturally centred around small-volume brands. However, here’s my list of three mass-market models I’d love to see in India and why I think they’d make sense.

First up is something I’ve long dreamed of - the Toyota GT86. This 2+2-seater, is noted for its affordability and fun factor derived from a small, 2.0-litre, front-mounted engine driving the rear wheels. Imported into India, it could easily be the most affordable sportscar here and I can’t imagine Toyota finding it too difficult selling a few of these. The car looks the part and, more importantly, goes the part too; our sister publication Autocar UK called it the keenest, sharpest, most enjoyable and loveable small sports car for a generation. Given the aspirational value of a sportscar, Toyota could easily manage healthy margins and in the India line-up, it would bring in the fun factor the brand so desperately needs.

Next is another sportscar I’ve been longing to see but always believed to be a pipe dream – until now perhaps. Based on the Mazda Miata, the Fiat 124 Spider is another affordable little pocket rocket and with a drop-top, too. Flawed it may be in some areas but it’s still widely held to be better than most convertibles for as little money. Yes, the Fiat brand is virtually dead in India with all of FCA’s focus currently on Jeep and, given my affinity for the Italian brand, I am perhaps looking at this through rose-tinted glasses. But by its own admission, FCA is not yet done with Fiat in India. In that case the 124 Spider would make for a quick and easy plug until more can be done for the Italian marque. And then there’s also the Abarth version of the 124 Spider!

Lastly, there’s Suzuki’s newly introduced Jimny. We already know that in its current form, Maruti finds it too small and too expensive for our market, but leave aside localisation and the massive volumes required and think imports of CBUs (completely built units) or even CKDs (completely knocked-down units) minus the homologation costs and time. Things do look a bit different. And besides, it’s more than just a sub-four-metre SUV; it’s a two-door lifestyle off-roader and given the crazy interest its stirred up here, I’m sure it wouldn’t struggle to find homes. It would make for a fun statement and only further strengthen Maruti’s recent push towards a younger audience.

Well, these are the ones I’d like to see here and why I think they’d stand a chance – let me know what you’d like to see imported and why. Perhaps this is all wishful thinking, or maybe some kind soul at Fiat, Maruti or Toyota will read this and get thinking; maybe they already are. Fingers crossed!