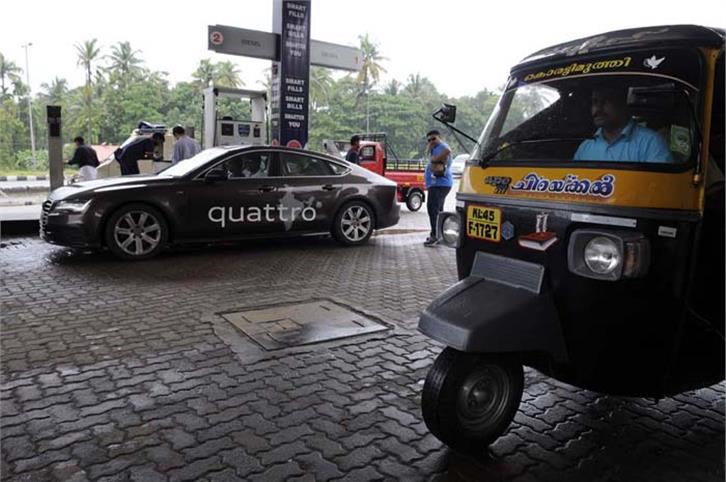 The team kicks off the journey from the rice bowl of India, the low-lying Kuttanad.

We’re in an Audi A7 and A8, below sea level. It’s the third and final chapter of the Audi Great Indian quattro Drive. This time, we’re driving from the lowest place in India, Kuttanad in Kerala, all the way up to the highest motorable road in India, which is in Khardung La, Leh. It’s around 10am and we’re in the Kuttanad region, trying to find a sign that says ‘Kuttanad’ on it. Turns out, three towns make up the surrounding area of Kuttanad.

Flag off from the lowest point done and the Audis have a long way to go till they reach their final destination.

In the area surrounding Kuttanad, there are endless paddy fields as far as the eye can see. Rice is a major source of income for this region and Kuttanad is often referred to as the rice bowl of India. What’s interesting about this place though, is that it’s one of the few places in the world where farming is carried out below sea level. And because it’s below sea level, nearly all the houses we passed through had water right up to their doorsteps.

A word of caution, not too many of the locals understand Hindi or English and knowing the local language is a boon. Although I’m not sure if my version of the language can even be called Malayalam, the locals seem to understand. I must remember to thank my grandmother for not letting me forget my mother tongue.

This leg of the journey is the shortest – we’re only covering around 90km before we stop for the night in Kochi. So, when we set off from Kuttanad, we know we have plenty of time to drive around the neighbouring towns. We stop by at Alappuzha, more commonly known as Alleppey, and pronounced Aa-la-pu-rra. The town is famous for its houseboats, and these aren’t just your run-of-the-mill houseboats – some of them come equipped with air conditioning, flatscreen TVs, satellite TV and the works. We decide to stop for lunch at Alleppey. And what sumptuous food! A hearty, Malayali lunch later – parotta and beef curry – we’re off for Cochin. We reach the city at around 6pm and use the time to wind down. There’s still a long, long way to go. Al the way to Bangalore this time.