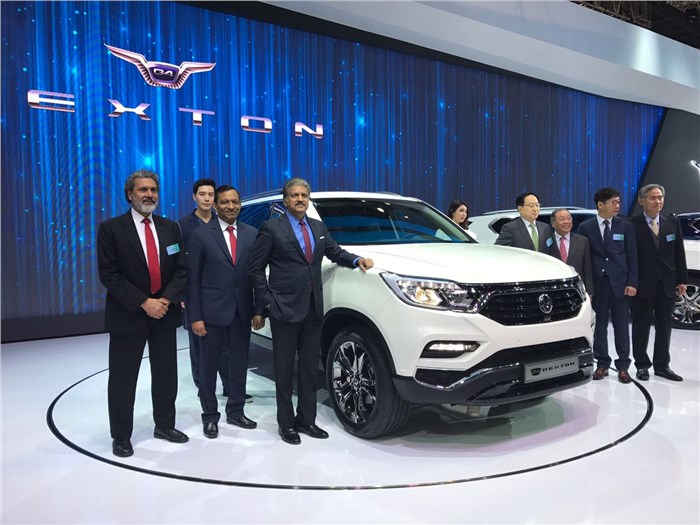 SsangYong has unveiled its all-new fourth generation Rexton at the ongoing 2017 Seoul motor show 2017. Launched as the G4 Rexton in Korea, SsangYong’s flagship SUV will be called just the Rexton in international markets.

Riding on the success of the Tivoli compact SUV, a resurgent SsangYong is betting big on the G4 Rexton to establish itself as a credible global SUV player. The new Rexton is built on an all-new body-on-frame chassis developed jointly by SsangYong and POSCO, Korea’s leading steel making company. Christened ‘Quad Frame’, the new, high-tensile strength steel chassis boasts of a higher torsional stiffness and lower weight, which is expected to translate into a dramatically improved ride and handling as well as fuel efficiency.

The new Rexton is an all-new design based on the LIV-2 concept first shown at the 2016 Paris motor show. In terms of styling, the new Rexton still looks a bit old-school like most body-on-frame SUVs but has well-balanced proportions and some modern touches like projector headlamps and LEDs which stand out. Standing 1800mm tall, it’s an imposing SUV nonetheless, more in the mould of the Fortuner and the Endeavour, which are the Rexton’s natural rivals. 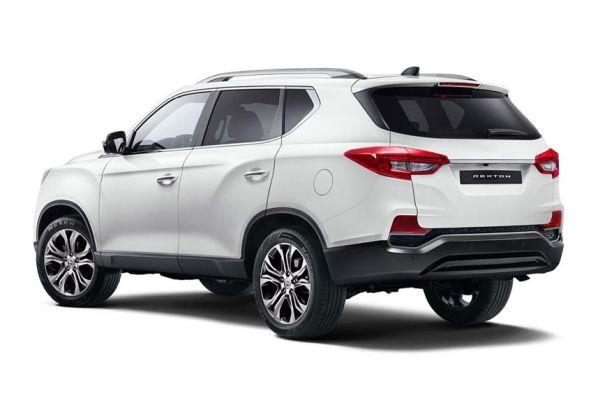 The interiors are where the new Rexton genuinely stands out, not in terms of design but the quality the well-appointed cabin exudes. The soft-feel plastics, brushed aluminium accents and polished surfaces give a premium feel but what gives a real sense of luxury is the Nappa leather superbly stitched with a quilted pattern. In terms of features too, SsangYong has thrown everything it can into the new Rexton. The high-end 10-speaker infotainment system gets a massive (largest in class) 9.2 high-definition screen with Apple CarPlay and Android Auto mirroring software. In fact, SsangYong says that all the contents, including the navigation can be displayed in HD quality for the first time. There’s also a 360-degree camera, auto closing doors which lock automatically when the key is carried away from the car and a powered tailgate.

The Rexton scores more brownie points with the space on offer. There’s a huge amount of space inside that big cabin with ample legroom and headroom. Though the Rexton will be sold as a seven-seater, the launch models at the Seoul motor show came in only five-seat configuration. 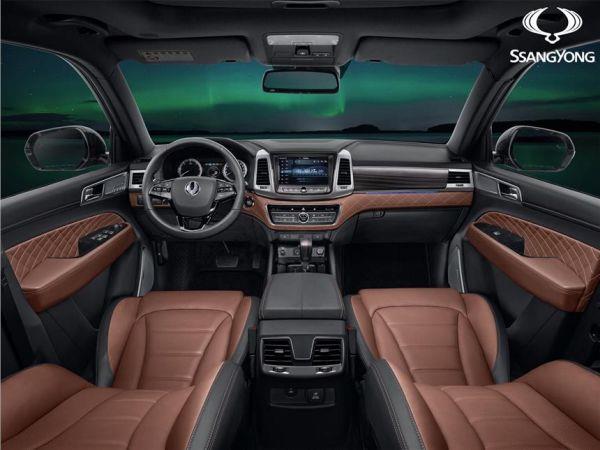 Powering SsangYong’s range-topping SUV is a 2.2-litre e-XDi220 diesel engine paired with a Mercedes-sourced seven-speed automatic gearbox. No engine outputs have been disclosed as yet though sources say that this new motor is likely to produce 175hp and 420Nm of torque. Power is channelled to either the rear or all four wheels via a selectable four-wheel-drive system.

SsangYong parent Mahindra & Mahindra (M&M) hasn’t confirmed the launch of the new Rexton in India and will wait until a feasibility study is over before taking any decision. “We have to first decide if and when to bring the Rexton to India,” said Dr. Pawan Goenka, managing director of M&M, India. “The reason I am saying ‘if’ is because that though it is undoubtedly a good product and will do well in India, the price is crucial. We need to understand what price that would be and we need to understand whether at that price we can afford to sell it in India. Within the next four weeks or so, we will know whether we are able to bring this product to India at the right price equation. If the answer is ‘yes’ then it should take us about a year to launch it in our market,” Goenka clarified.

What is also unclear is if the Rexton will be badged a SsangYong or a Mahindra. SsangYong is keen to build its brand in India and, hence, would prefer to use its own badge. “India will be one of the biggest markets in the world and it is important for us to have our presence there,” said Choi Johng-Sik, CEO of SsangYong Motor. M&M, however, has different ideas having burnt its fingers with the last Rexton. “There is a positive side about going upmarket with a Korean brand but we do realise the challenge of building an all-new brand,” said Goenka who also stated, “we have not yet decided what badge to put on the car as the first task is to make it feasible for India”.

Pricing will be the key for the Rexton, which will have to undercut the Fortuner by at least Rs 4 lakh if it has to have a fighting chance of selling in decent numbers. M&M is quietly optimistic of achieving the aggressive price target of the Rexton, in which case, it could be on the road in time for a 2018 Auto Expo launch. The company has internally set a reasonable target of around 500 units per month but it’s not the sales numbers that is a major concern for M&M. The Rexton is all about creating a premium image for the company and opening doors to a set of upmarket customers who probably never considered a Mahindra product before.