The all-new compact SUV from Hyundai will launch in 2018; to rival EcoSport and Vitara Brezza. 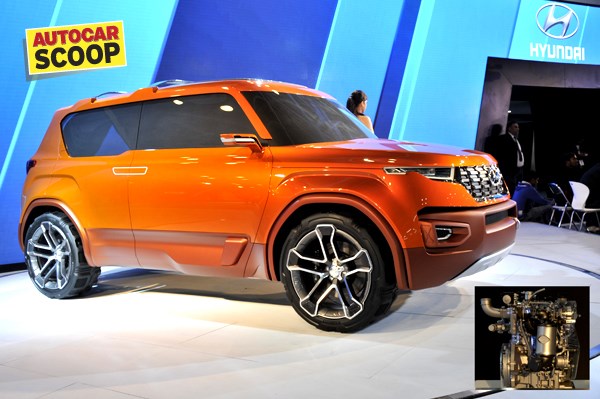 Hyundai showcased a compact SUV concept at the Auto Expo earlier this year. This new compact SUV (Codname: HND14 or Carlino) will be the smallest SUV in Hyundai’s India line-up and will sit below the Creta. Its sub-four-metre length will make it a direct rival to the likes of the Ford EcoSport and the Maruti Vitara Brezza. The car is expected to launch in India in 2018.

There is no confirmation on whether this new SUV will retain the boxy styling of the concept which is quite a departure from typical Hyundai styling. But, in terms of mechanicals, sources tell us that the new SUV will introduce Hyundai's small-capacity turbo-petrol engine in the market. Which means, instead of the regular 1.2-litre Kappa engine, the SUV will be powered by a 1.0-litre engine capable of developing 118hp. The motor is already available on the international-spec i20 hatchback. The reason of using the turbo-petrol motor instead of the normally aspirated one is because Hyundai believes that the “strong mid-range torque of the turbo will be essential for the compact SUV.”

In addition to the petrol unit, the SUV will also get the option of the popular 1.4-litre U2 CRDi diesel engine that does duty in the Creta, the Verna and the i20.