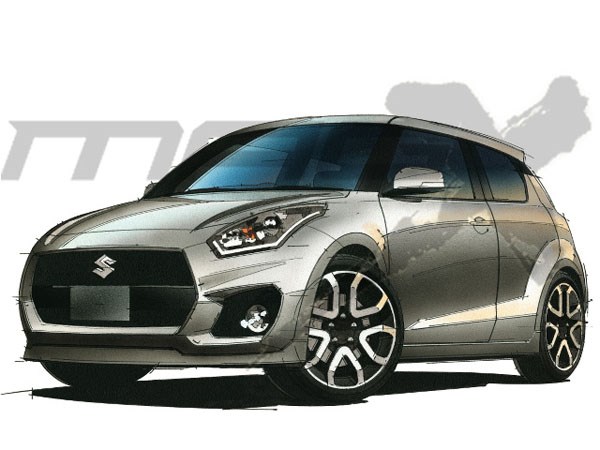 All-new Suzuki Swift will be unveiled in Geneva next year; to feature style changes from the current model.

The next-gen Swift had been spied testing a few months ago and it will see a public debut at the Geneva motor show in March next year.  The fourth-generation Swift is likely to be lighter than the larger Baleno and will continue to sit below the Baleno in Suzuki’s global lineup, however there will be engines and other parts shared between the two models.

The 1.0-litre Boosterjet petrol engine, on sale in Swifts sold in select international markets, will continue to be offered. The more-powerful Swift Sport, also sold abroad will likely come with a 1.4-litre engine. Suzuki also remains tight-lipped on the prospect of hybrid technology being used on the model in the future.

As seen before, the new Swift’s styling is quite a big departure from the current generation on sale, but there are elements that tie it to the car like the familiar floating roof. The majority of the changes have taken place at the front of the car, where there's a new nose with a hexagonal grille and large air intakes. The front lights mirror a similar design used on the upcoming Baleno with dedicated projector lamps and daytime running lights.

The interior also sees major upgrades and a new Porsche-like three-spoke steering wheel. Suzuki says the next-generation will remain generously equipped. Dimensionally, the new Swift will be similar to the current model to avoid any encroachment on the Baleno. The carmaker describes the latter as a more practical choice for international markets and the Swift as the 'emotional' choice. There are chances that the next-gen Swift may exclude the internationally sold three-door model altogether.

For India, expect Maruti to continue the familiar 1.2-litre K-series motor and the 1.3-litre diesel engine as well. The Boosterjet turbo petrol motor is likely to be available as well. Like the current generation and the one before, the Swift for India will spawn a 'Dzire' compact sedan as well.