Jaguar J-Pace flagship SUV to be revealed in 2021

An electric-powered rear axle and an all-new platform will feature on the new range-topping luxury SUV from Jaguar. 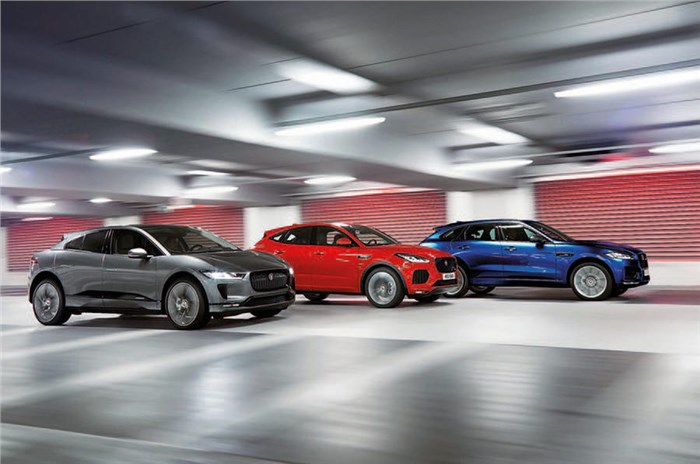 Jaguar’s upcoming J-Pace flagship SUV will be one of the first electrified models built on an all-new Jaguar Land Rover platform, called MLA, and a fully electric version is also likely to be made, according to sources.

The J-Pace is thought to be just over two years from launch and will arrive around the same time as the fifth-generation Range Rover, which will also be built on the firm’s MLA platform. The J-Pace is one of three new ‘mid-height’ Jaguar Land Rover models that will be based around electrified powertrains.

The MLA platform, which will underpin all JLR vehicles by 2025, will be all-aluminium and is expected to be noticeably lighter than the current D7 and D8 architectures.

One of the technical highlights for the J-Pace, which will sit above the E-Pace and F-Pace in Jaguar’s SUV line-up, will be its electric motor-driven rear wheels. As with all of the MLA-based plug-in hybrids, the conventional, mechanical all-wheel drive is being dropped.

Using an electric motor on the back axle provides a number of advantages. Dropping the mechanical connection to the back wheels, including the propshaft and power take-off unit, allows more room for the battery pack and improves space inside the cabin by eliminating the traditional centre tunnel.

The electric axle should also make for a significant improvement in handling and during off-road work. The speed and the precise, controllable nature of the electric motor’s power delivery should improve on-road handling – especially on corners and poor surfaces – as well as provide very fine control of the torque being fed to the rear wheels when driving off-road.

Little has emerged so far about the features offered by the MLA architecture, but more information is expected towards the end of this year as the new products get closer to launch.

The J-Pace is set to come standard as a plug-in hybrid, with a turbocharged version of the recently announced Ingenium straight-six engine expected to be the mainstream powertrain.

There’s no official news on the electric-only range of the J-Pace plug-in hybrid, but around 80km in favourable conditions will be the minimum target. As JLR outlined last year in an investor presentation, it believes new car buyers remain sceptical about pure-battery vehicles, so providing a battery that allows emission-free driving for shorter city journeys could be the best compromise.

Jaguar Land Rover predicts that just 20 percent of new car sales will be of pure EVs by 2025, which is why the ability of the MLA platform to be used with conventional petrol/ diesel, plug-in and pure EV powertrains is essential to safeguarding the company’s future. However, predicting the degree by which the market will swing towards electrification is currently eluding nearly everyone in the auto industry.

Jaguar tends not to preview new models with concept cars and has given little away about the J-Pace’s styling. It is, however, likely to build on the distinctive look of the electric I-Pace, which has provided a much-need fresh direction for the Jaguar aesthetic.

Like the recently facelifted XE, the J-Pace’s interior will feature OLED screens intended to raise the perceived quality of the cabin in order to rival those of flagship German crossovers.

The J-Pace is expected to be around 4.9 metres long, and its flat floor should help it deliver impressive interior space with a healthy boot volume of at least 650 litres. However, its expected lower roofline means that it won’t be as airy its Range Rover sister.

As Audi engineers have previously explained with the design of the e-tron SUV, a great deal of attention needs to be paid to minimising an EV’s frontal area and reducing overall drag in order to maximise its battery range.

Like all car makers, Jaguar Land Rover will have to significantly reduce its fleet-average fuel consumption and emissions figures over the next decade, as a result of increasingly tough EU targets between now and 2030.

According to an investor’s presentation last year, the new mid-height model line-up will consist of two Jaguars and one Range Rover. It’s thought that the Range Rover model will be the new ‘Road Rover’ and that the other is likely to be a Jaguar road car – most probably a pure EV replacement for the ageing XJ limousine, as previously uncovered by our sister publication, Autocar UK.

Last year’s presentation also suggested that four SUVs – Range Rover, Range Rover Sport, new Defender and Discovery Mk6 – will be built using the ‘high rise’ version of the platform. There will be seven models based on the ‘low rise’ MLA, potentially including the next F-Pace and Velar, as well as the Discovery Sport and Evoque and – possibly – two Jaguar sedans.