The cost per unit is around Rs 18, which is similar to Tata Power, but for a faster 30kWh charger.

Sales of electric vehicle have been steadily on the rise over the past couple of years, and as fuel prices continue to soar, EVs are making a case for themselves even more. One criticism, however, that’s always brought up is that although the electric cars are 100 percent green – there are no emissions – the electricity used to charge them isn't from a green source. But, India’s first biogas-powered EV charger is looking to change that.

Inaugurated on May 9, GO EC is set up in Mumbai’s Mahalaxmi suburb. AeroCare Clean Energy, in partnership with Municipal Corporation of Greater Mumbai (MCGM), has installed the bio-gas powered EV charger, with a grant from Department of Biotechnology (BIRAC), Govt of India. The system uses leftover food from hotels and other establishments and converts it into methane, thereby producing electricity.

What does it entail?

“We already had a decentralised waste management system, with fertiliser being a by-product,” AeroCare CEO Ankit Zaveri says. “We process two tonnes of waste a day, which translates to about 180-200m3 (metre cube) of methane, thereby converting it into electricity.”

The in-charge of the plant, Mustafa Shaikh, says, “GO EC is present in Kerala too, and we initially planned to supply the electricity produced to power street lights. Later on, we tied up with the Kerala unit to charge electric vehicles.”

Shaikh adds that there are three ways the organic waste can be converted and utilised – bio CNG, bio electrical and bio cooking.

How is electricity produced?

“Food waste, which is the raw material, is first shredded and crushed before being sent to the hydrolyser. It is then sent to a mixing tank and passed on to the digester tank, from where it is purified and stored in a balloon. Finally, a generator converts the gas to electricity,” Shaikh says. The digester tank has a capacity to hold about 1 lakh litres of slurry, which is maintained at 40degC, he added.

Meanwhile, Zaveri says that there are plans to upgrade the chargers in the future as the cars’ charging speeds increase.

To charge their vehicle, Zaveri says, one has to download the GO EC app, top up the wallet and then pay. “There are also plans to introduce Radio Frequency Identification (RFID) tags at a later date,” he adds. RFID is the same technology used to pay tolls through FASTags at highways.

Our first impressions of using the GO EC app were that it is not as seamless as the Tata Power app. We charged the ZS EV for 14 minutes, which topped up our battery by 14 percent at 6.95kWh. The cost for the same was Rs 118. On a home charger, the cost per unit is between Rs 4-8, which is cheaper, albeit at slower charging speeds. 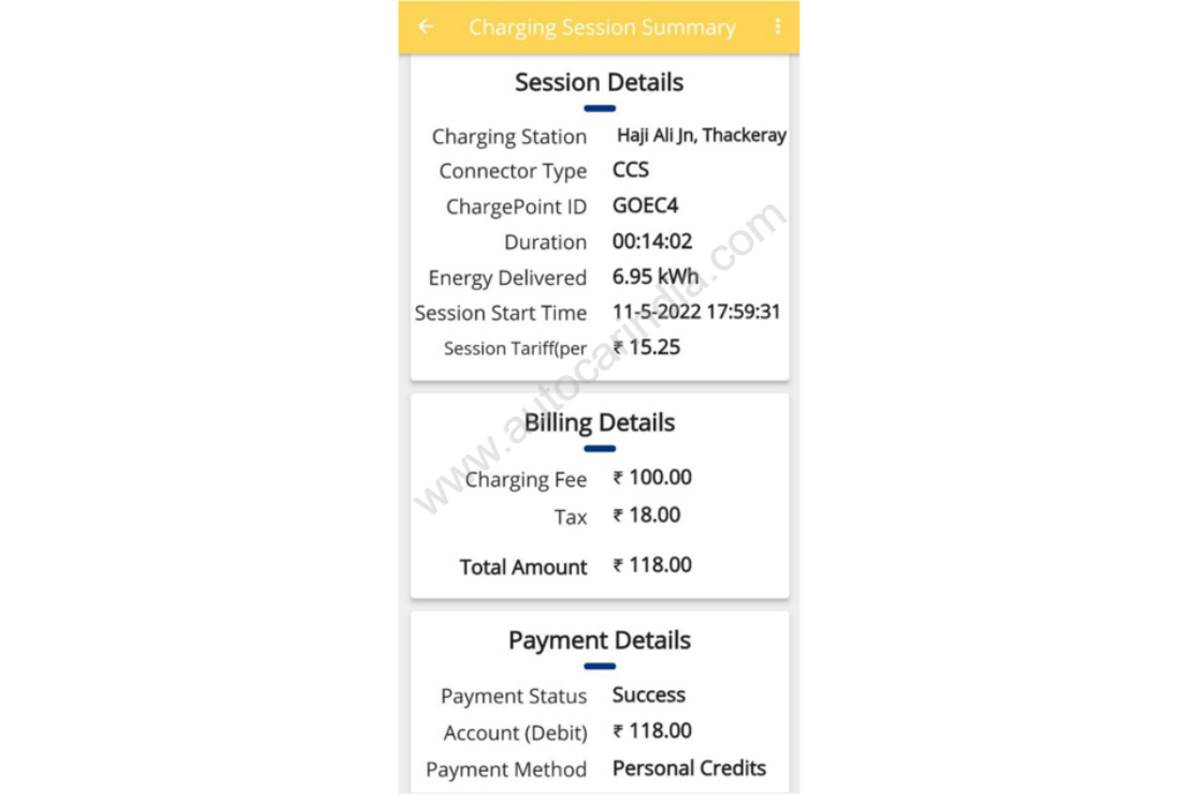 According to Zaveri, “The aim is to install a charger in each ward in Mumbai.  The company is also planning to set up a new plant in Ahmedabad.”

What are your thoughts on this greener solution to charge your EV? Let us know in the comment.