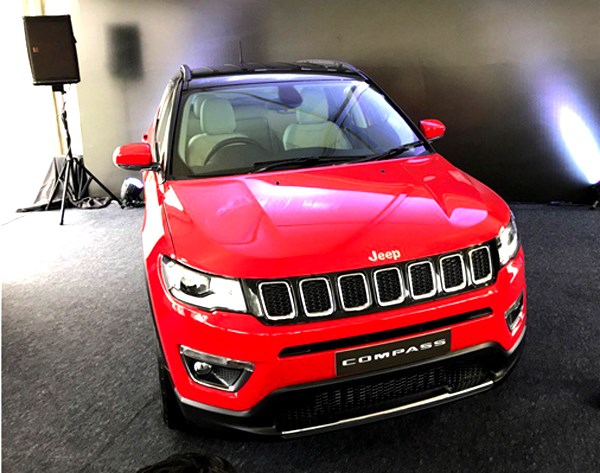 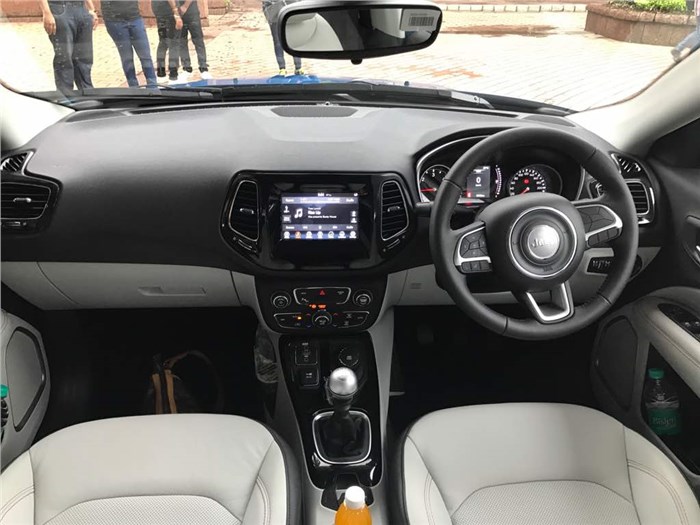 Jeep has revealed additional details of its new SUV, the Compass which is slated to launch in August this year. The carmaker had showcased the SUV back in April.

Equipment and features
The Compass will be offered in India in three variants –  Sport, Latitude and Limited. The primary differences between the variants will be in seating surfaces, choice of paint shades and interior trim bits, along with varying alloy wheel design and sizes. Higher variants of the Compass will come with a 7.0-inch Uconnect infotainment system; this system will come with Apple CarPlay and Android Auto. Sources tell us that Jeep will not compromise on the interior quality of the Compass sold in India and the models will have exactly the same levels of fit and finish as the ones that will be exported. All Compass variants in India will feature a 60:40 split rear seats and top variants will offer six airbags. Lower trims will come with two front airbags as standard. Additional safety features will include a reverse camera with sensors, along with the usual safety equipment like ABS, ESP, electronic rollover mitigation and hill-start assist.

Exteriors
The new Compass looks like a mini Grand Cherokee. The profile is more square than sporty, setting it apart from the crowd. There is an air of sophistication in the manner in which the body and the roof integrate towards the rear, and the chrome lining that loops around looks quite upmarket too. Up front, you have the familiar Jeep seven-slot grille and headlight combo; the Jeep's typically squared-off wheel arches stand out too. The Compass also gets LED elements in the headlamps and tail-lamps. Five exterior paint shades will be offered for the India-spec Compass.

Built on the same platform as the Renegade (Small Wide 4x4), the Compass, however, features a longer wheelbase for greater space on the inside and a mildly altered suspension system. It also gets frequency selective damping, which automatically alters the dampers for rough roads and corners, and an electric handbrake as well.

Interior
On the inside, you get the feel of a much larger SUV. The design is pretty conventional – there's a traditional instrument panel, a clearly defined centre console, and the large steering is shared with other Jeep SUVs and hence, is full of buttons and controls. The top part of the centre console features a 7.0-inch touchscreen flanked by two vents on each side. The layer below that has the air conditioning controls, and the four-wheel-drive controls and gear lever are positioned below that.

The Compass for the Indian market will get a two-tone interior in some variants and plenty of metal brightwork or bracketing to give it an upmarket look. Unique features include a Terrain Select dial and a smaller 3.5-inch driver information display. Plastic quality is impressive in places, similar to that in larger Jeeps. It appears to be tough and hard-wearing, which is important for the Compass' positioning, and bits like the central console are built better too. The India-specCompass will come with a soft-touch dashboard and dual-zone climate control. What the Compass has in abundance is excellent seat comfort. Being a global SUV, which will also have to service markets like the US and Europe, the front seats are more than ample with loads of thigh and back support. Higher variants will get leather seats as standard. Rear seat passengers also have it good. Ingress is quite effortless, the seat is placed at the perfect height, and back support is very good. There's even a bit of surplus legroom. Headroom, though, could feel a bit for passengers taller than six feet. The Compass for India, however, won't get a sunroof, but all season tyres will be standard on higher trims.

Engine and gearbox
For India, two engine options will be offered. First up, there is a 2.0-litre MultiJet diesel good for 170hp and 350Nm of torque. This engine will be available in both 4x2 and 4x4 configurations. The sole gearbox on offer with this engine will be a six-speed manual unit. There will be no automatic transmission on offer when launched. However, there is a chance of a nine-speed automatic gearbox at a later stage. The second engine is the 1.4-litre MultiAir petrol. This motor churns out around 160hp, and like the diesel variant will be available with 4x2 and 4x4 option. Transmission choices include a six-speed manual and a seven-speed dual-clutch automatic.

India production details
As reported earlier, the brand's first locally assembled model will be produced at Fiat's Ranjangaon facility in Maharashtra from June. Fiat and Jeep are betting big on this model and have invested around US$280 million for the production of the Compass at this plant. Globally, the SUV replaces the previous-gen Compass and Patriot SUVs and is also manufactured at multiple locations like China and South America. The big news, however, is that India is the Compass' mother plant for all right-hand-drive markets, including the UK, Japan and Australia. The Compass will be available globally in as many as 17 engine-gearbox and drivetrain configurations and some of them will be manufactured in India for the international markets. The five-seater SUV is 4,398mm long, 1,667mm tall and 1,819mm wide (with mirrors folded).

Off-road credentials
Jeep will stand out from the crowd by retaining the off-road skills that are so central to its brand. Top-of-the-line variants of the Compass will come with a dedicated four-wheel-drive system, and Jeep's Selec-Terrain Traction Management system which optimises the SUV for conditions like snow, sand/mud and rocks will be part of the spec too. More expensive versions will get a differential locking system. For India, a low range won’t be available in the regular Compass. This option is likely to be part of the more off-road-focused Trailhawk version which will join the line-up later. Jeep will also offer the Compass with a two-wheel-drive variant in order to achieve a lower entry price.

Pricing and competition check
The Compass is expected to be priced between Rs 18 lakh and Rs 25 lakh. Direct rivals for the SUV will include the Hyundai Tucson, the Ford Endeavour, the Toyota Fortuner and the recently launched Volkswagen Tiguan.