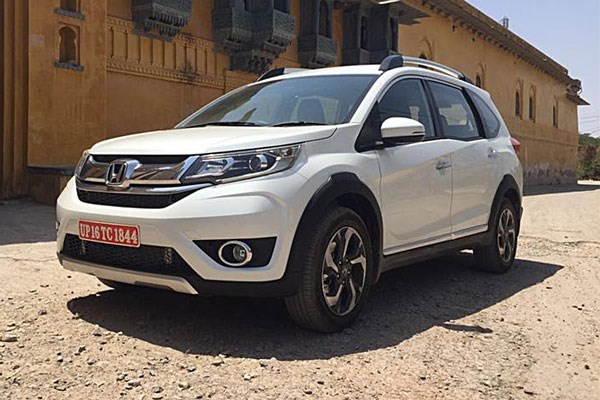 Only SUV in its class to offer seven seats, the BR-V gets familiar 1.5-litre petrol and diesel engines, and also offers an auto 'box option.

Honda today marked its entry into the popular small SUV and premium crossover segment in India with the introduction of the BR-V small SUV at a starting price of Rs 8.75 lakh for the base petrol E variant. The BR-V has four variants on offer —the base E, S, V and the top-spec VX – all of them available with the option of both petrol and diesel engines. A CVT automatic gearbox is also being offered on the V trim as an option.

First unveiled at the Indonesia International Auto Show last year, the BR-V or Bold Runabout Vehicle is based on the same platform as the Brio, Mobilio and Amaze to better manage costs. It goes up against established rivals such as the Renault Duster as well as the Maruti S-cross and the hugely popular Hyundai Creta.

The talking point for Honda’s small SUV is its ability to seat seven, just like the Mobilio, making it the only car in its class to offer a third row of seats.

With regards to the exterior, the BR-V features a bold, upright nose that carries Honda’s now trademark grille, a solid strip of chrome, sharp, angular headlights, a new wider air dam on the front bumper and two chrome-ringed fog lamps. Also lending the BR-V strong, SUV-like cues are the massive wheel arches, which can house wheels measuring up to 17 inches; the India-spec vehicle comes with 16-inch wheels.

The BR-V also comes with 210mm of ground clearance, which would be welcome on our uneven roads. In the cabin, the small SUV is expected to be generous on space given Honda's clever packaging skills and the fact that it's the longest car in the segment, measuring up to 4,456mm.

In terms of features, the BR-V gets steering-mounted audio controls, driver’s seat height adjust, push-button start with keyless entry, 2 DIN audio player with Bluetooth, automatic climate control and leather seats and leather-wrapped steering wheel, gear knob and armrests based on trim levels. However, the BR-V does not get a touchscreen, which could be a disappointment to many buyers.

In terms of safety, the vehicle comes with dual front airbags as standard. ABS with EBD, however, is only available on mid-range and higher versions of the BR-V petrol, while they are standard on the diesel variants.

Under the hood, the BR-V is equipped with the familiar 1.5-litre petrol and diesel engines from the City and the Mobilio. The diesel engine continues to make 100hp and 200Nm, contrary to prior indications that the engine would be tuned for more power. The petrol motor is a 1.5-litre, i-VTEC petrol unit making 119hp and 145Nm. A six-speed manual gearbox is offered as standard on both petrol and diesel variants, while the petrol gets the additional option of a CVT gearbox. Interestingly, the petrol automatic variant is also equipped with steering-mounted paddle shifters, a class-first feature.

In terms of mileage, the diesel manual returns 21.9kpl, the petrol manual 15.4kpl and the petrol CVT 16kpl, according to ARAI ratings.

The BR-V will plug a vital gap in Honda’s portfolio and the carmaker is hoping to pull in buyers with this SUV’s roomy cabin and strong diesel engine. Although the vehicle has some design elements resembling the Mobilio which may not go down well with image-conscious Indian buyers, the fact that Honda will be the only carmaker to offer a seven-seater in the small SUV or crossover segment is sure to give it an edge over rivals.

Here is how the BR-V stacks up against its rivals in terms of prices: