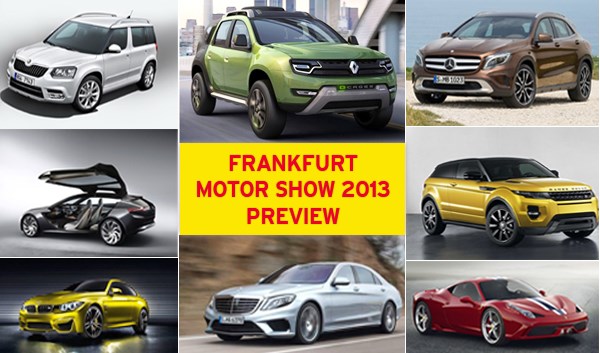 The 2013 Frankfurt motor show will commence on September 10. Catch up on some of the show's highlights.

The 65th Frankfurt motor show will open its doors to the public between September 12 and September 22, 2013, and there are a lot of car manufacturer’s lining up to show off their vehicles. BMW will unveil the production version of the new i8 electric roadster, Audi will showcase the reborn Quattro supercar concept and Toyota’s been plugging away at a new hybrid concept that uses the same hybrid race tech as in the manufacturer’s FIA World Endurance Championship car. And there’s so much more. We’ve highlighted our pick of the lot from the upcoming Frankfurt motor show.

The Frankfurt motor show will host Audi’s new A8 facelift, along with its high performance version, the S8.The facelifted A8 gets more powerful and efficient engines, added safety features, subtle styling changes and Audi’s new matrix LED headlights. There are also reports that Audi could debut its first MPV (possibly badged V4) based on the MQB platform. The carmaker claims that there could be five- and even seven-seat options for the MPV.

Two new concepts are also lined up for the show. It has released sketches of the Quattro supercar concept, and Audi is likely to base the road-going production version of the Quattro concept on a modified version of the MLB platform that underpins the A5. The other concept that is likely to make an appearance is the Audi Spacer. This too will be based on the MQB platform and will share engines and other parts with the A3. There aren’t too many details about this concept, but reports suggest that it could have either five or seven seats and could be around 4.5m long.

BMW’s all-new 4-series coupe will debut at show, and powering the car will be three turbo-charged engine options with three more forced-induction units to follow. Rear and four-wheel drive will also be offered in certain models.

However, BMW’s highlight at the show will undoubtedly be the i3 hatchback and i8 coupe, the first of what the German carmaker promises will be a complete range of alternative drive models to be sold under its new I brand. There will also be facelifted versions of the 5-series, M5 and X5 on display at the show. That’s not all though. BMW will also display a few concepts, including the M4 coupe, Concept5 X5 eDrive and the Concept Active Tourer.

Upgrades for the Chevrolet Spark (Beat in India) and Cruze, among others, will be the highlights at the Chevrolet stall in Frankfurt. The Spark will get exterior modifications and matching restyled interiors while the new Cruze will get five new engine options and a new Side Blind Zone Alert safety system.

There will also be an all-new Camaro on display for the first time at the show. Power will come from a 6.2-litre V8 engine mated to either a six-speed manual or automatic transmission. 0-100kph comes up in 5.2sec, with the convertible reaching the same speed just 0.2 seconds later. There will also be revised aerodynamics, interior updates, and what Chevrolet claims is the most significant redesign of the model since the introduction of the fifth-gen model in 2006.

There’ll be an all-new, lightweight performance version of the Ferrari 458, dubbed the 458 Speciale, on display at the show. Ferrari claims several technical innovations that have been incorporated into the car will be found all future Ferrari road cars. It will come with a modified version of the 458’s V8, with 597bhp and 55kgm of torque, making it the most powerful naturally aspirated V8 ever built by the company.

Honda will debut the Civic Tourer, which was developed in Europe specifically for the EU market. The highlight is the carmaker’s claim that the Tourer has the best seats-up luggage capacity in its class at 624-litres with the tonneau cover in place.

There will also be a performance-oriented Civic Type-R that Honda will unveil at the show. So far, the car has only been spotted testing, with no actually images from the carmaker itself, but Honda has confirmed that the car will make its debut at Frankfurt. Finally, Honda will take the wraps off its new Jazz.

Hyundai
Korean carmaker Hyundai will showcase a slew of models at the show. Among those on display would be the i10, i20 and i30.

The new second-generation i10 will be unveiled  at the show. The replacement will be longer and lower than the current car and will pack a lot more equipment. The new i20 will also make an appearance and this car has already been spied testing here. The new i20 will be based on an all-new platform and will be much larger in size than the current issue. The new i30 will also be seen at the show and the manufacturer will continue with its overarching trend of making successive versions of its cars larger. The new car gets a lot more safety tech and is claimed to be more fuel efficient as well.
Mercedes-Benz
Mercedes-Benz’s 577bhp S63 AMG has been revealed already ahead of a planned public debut at the Frankfurt motor show. The usual styling tweaks will be present, with the car expected to go on sale globally next year. There will also be a hybrid version of the car on display, called the S500 plug-in hybrid. The car is powered by a new 329bhp 3.0-litre V6 turbocharged engine combined with an 80kW motor. Mercedes claims that the S500 is capable of driving up to 30km on electric power alone.

The carmaker will also display an E200 Natural Gas Drive, which is a successor to the pre-facelift E 200 NGT BlueEfficiency that can run on petrol or on natural gas.

Merc’s highly anticipated GLA SUV will also be present at the show. It is the fourth member of the carmaker’s MFA platform, joining the A-class, B-class and CLA. And while the looks of the concept GLA have been toned down for the production car, it still comes across as one of the sportiest and most dynamic-looking cars in the class.
Nissan

Reports claim Nissan’s X-Trail is entering the final stages of development ahead of a launch at the Frankfurt motor show. The new car is set to be given much clearer positioning within the Nissan line-up, and is set to be Nissan’s sole offering in the seven-seat SUV segment. The new X-Trail promises more road-biased ride and handling than the outgoing car, with it being just as capable as the current car off road when equipped with the optional all-wheel drive system.
Porsche
Porsche will celebrate the 40th anniversary of the Porsche 911 Turbo in style by publically unveiling the fastest, most powerful and most technically advanced version yet, the new 991-series. It will be offered in two power outputs, Turbo and Turbo S. In turbo S guise, it will cover 0-100kph in 3.1 seconds!

There are also rumours that Porsche will debut a cut-price, entry level 911 at the show. It will also display a 911 that’s been designed with inputs from fans, a special commemorative edition 911, and the all-new Porsche 918 Spyder.
Range Rover
Range Rover will showcase the 2014 Evoque equipped with a nine-speed ZF gearbox. The new Evoque also gets improved economy, and a few other additional features like the Active Driveline ‘on-demand’ four-wheel drive system, and a host of safety and convenience features as well. There will also be minor changes to the exterior, such as new badges and new alloy wheel options and extra colour choices inside.

Jaguar Land Rover will also debut its Discovery facelift at Frankfurt, with test mules currently in the final stages of development. Styling changes include solid LED graphic inspired by the look of the new Range Rover and Range Rover Sport models, along with small performance and economy improvements.

There will also be new hybrid versions of the Range Rover and Range Rover Sport. Land Rover claims spectacular economy gains, staggering performance, uncompromised comfort and even better refinement than conventional diesel and petrol Range Rovers. To prove the new hybrid models, which are claimed to deliver similar levels of off-road capability and durability to conventional models, Land Rover is planning a 10,000-mile expedition called ‘2013 Silk Trail’. This will follow ancient trading routes running through 12 countries from France to India, via Poland, Russia and China, and reaching the Mumbai HQ of JLR’s parent company, in mid-October.
Renault

Renault will showcase the mildly updated Koleos at the show. It’s already made its debut at the International Buenos Aires motor show in Argentina and features changes like a mildly modified V-shaped grille, and a larger logo. On the inside, it sports new trim, and in the case of the display model, new brown leather upholstery to match the exterior finish. Minor updates to the kit inside will also be on offer. The engine line-up, though, will remain unchanged.
Lamborghini
Lamborghini will unveil what it says is the fastest ever version of the Gallardo at the Frankfurt show. It takes its name from the recently created race division and inspiration for its performance capabilities and styling comes from the Gallardo Super Trofeo race car. The Squadra Corse is road legal, and is powered by the same 562bhp V10 as the race car. It hits 0-100kph in 3.4sec and 0-200kph in 10.4 seconds with a top speed of 320kph.