Ford Mustang Mach-E to be launched in India

Ford’s new EV will likely come to India by 2021 via the CBU route; will rival the Audi e-tron and Jaguar I-Pace. 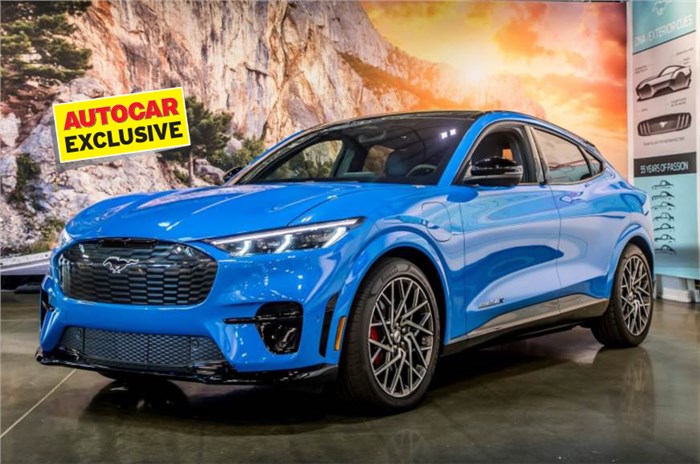 Ford’s first electric SUV – the Mustang-inspired Mach-E – is set to be launched in India by 2021. Revealed recently in full, the Mustang Mach-E will come to our shores via the CBU route, so it will surely be one expensive EV. It will, however, benefit from the lower GST rate for EVs.

At this time, it’s unclear which of the two battery options will be available with the Mach-E when it comes to our market. In international markets, the entry-level model features a single motor driving the rear wheels – either a 75kWh battery and 258hp motor, or a 99kWh battery and 289hp motor; both producing 416Nm of torque. Ford claims a 0-100kph time of under 8sec and a WLTP range of around either 450km or 595km, respectively, for this model.

The twin-motor, all-wheel-drive version of the Mach-E is offered in 75kWh battery and 258hp or 99kWh and 337hp forms; both versions produce 582Nm and have a claimed sub-7sec, 0-100kph time, with estimated ranges of 419km and 540km, respectively. All models have their top speed limited to 179kph.

By the time the Ford Mustang Mach-E arrives in India, there will be at least two all-electric premium SUVs on sale already – the Audi e-tron (set to launch early next year) and the Jaguar I-Pace (scheduled to launch late in 2020).