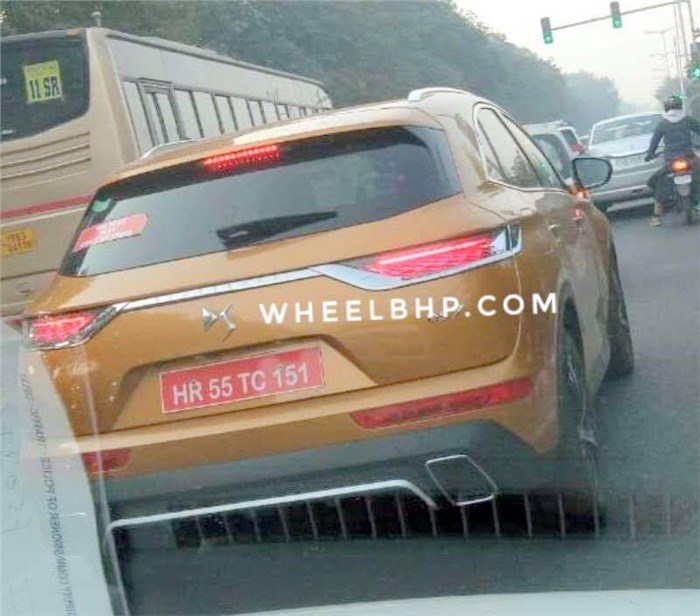 New SUV from PSA Peugeot-Citroen's luxury arm spotted on test, could be the brand’s first offering for India.

That Groupe PSA (consisting of Peugeot and Citroen) is all set to make an India entry has been known for some time now. What hasn’t been known, is its plan for a product line-up in our market. Now, though, things are becoming clearer as PSA has started testing the DS 7 Crossback, which has been spied on Indian soil for the first time.

But first, for a brief introduction to the DS brand. What started off as a suffix for special versions of Citroen's existing models was spun off into an independent luxury brand in 2014, and named DS Automobiles. The company focuses solely on making premium, luxury products, and while most of its offerings have been re-engineered Citroens, the DS 7 Crossback is its first built-from-the-ground-up model.

The DS 7 Crossback sits on PSA's EMP2 platform, which also underpins the Citroen C5 Aircross and the Peugeot 5008 SUVs. To give you an idea of what the DS 7 Crossback really is, it is meant to take on the Volvo XC40, BMW X1 and Audi Q3, but with an aim to offer more luxury, it’s bigger and more spacious than them all, and also packs in a plush interior and tech not seen before in the segment.

Engine options on the DS 7 Crossback include a 1.5-litre, 130hp diesel, a 2.0-litre, 180hp diesel and a 1.6-litre, 222hp turbo-petrol. A six-speed manual is standard on the 1.5, while the 2.0-litre diesel and the turbo-petrol get an eight-speed automatic gearbox. Power is sent to the front wheels only. A plug-in hybrid variant with 300hp and a 50km all-electric range is set to be introduced in 2019.

It’s clear that Groupe PSA is set to make its India entry with a DS model, but whether it will remain a DS or will be rebadged as a Citroen or a Peugeot is unclear at this time. What the DS 7 Crossback spotted on test could also be doing is testing the brand's BS-VI-compliant engines as well as the transmissions manufactured at the company’s new powertrain facility in Hosur, Tamil Nadu. Groupe PSA has also acquired the rights to the Ambassador name from Hindustan Motors, but what it chooses to do with that remains to be seen.

Do you think the DS 7 Crossback would be a good way for PSA to start its India innings? Should it be rebadged as a Citroen? Let us know in the comments.