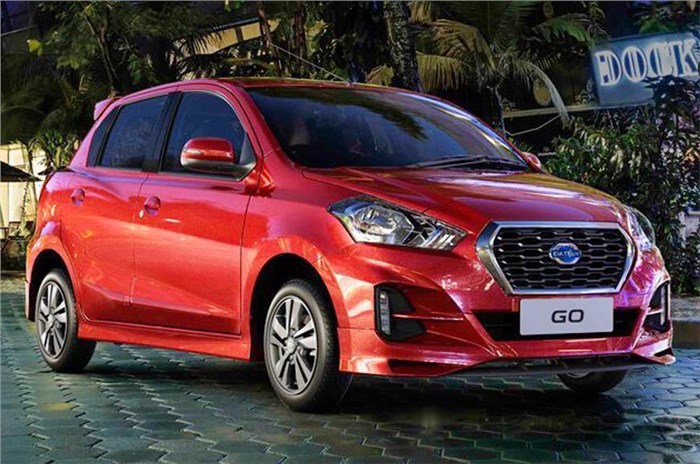 Upon launch, refreshed Datsun Go and Go+ are likely to be the cheapest cars to be equipped with Apple CarPlay and Android Auto.

Datsun will launch the heavily updated Go and Go+ in the Indian market on October 9, 2018. In addition to what's already known about the cars,we have learnt top-spec versions of both models will come with a 7.0-inch touchscreen with Apple CarPlay and Android Auto. In effect, the facelifted Datsuns could be the most affordable cars to boast this feature.

On the outside, the Datsun Go hatchback and Go+ MPV facelifts will be identifiable by their revised styling package. The cars will get reprofiled headlamps and restyled front bumpers with integrated daytime running LEDs. The grille will also get subtle changes to help the model look fresh. Higher-spec versions of the Go and Go+ will get 14-inch alloy wheels; both models get only plastic wheel covers at the moment. Datsun is said to be striving for a more premium look for its models and the updates should help, to that end.

Both cars will also get major changes to the interior. The basic dashboard of the current models will make way for a new dash. Sure, there will be carryover elements like the high-set gear lever. There's a new design for the central vents and of course, the new touchscreen infotainment system. Also, the revised instrument cluster sees the addition of an analogue tachometer.Moreover, the new dash will also get proper lids for the glove box. The exposed storage bay of the original models drew flak from buyers.

The models will also come with individual seats for the driver and co-driver. With the update, Datsun will also do away with the antiquated pull-type handbrake at the dash and replace it with a more convenient and conventional lift-type unit between the front seats.

As far as features go, the cars will come with electric mirror adjust, rear power windows, rear wash/wipe and rear parking sensors. We have learned that Datsun will also up the safety quotient on these models with the facelift. A driver-side airbag and ABS are now expected to be standard, while a passenger-side airbag will be part of the kit on higher trim cars.

The updated Go and Go+ will continue to be offered with the current 1.2-litre, three-cylinder petrol engine mated to a 5-speed manual transmission. Datsun sells a CVT-equipped Go in the Indonesian market, which is unlikely to make it to India. However, AMT versions could be on the cards.

The updated models will be priced at a premium of around Rs 30,000 over the price of the current model. The move up the price ladder will also bring with it fresh competition from the likes of the Tata Tiago, Maruti Suzuki Celerio and thenew Hyundai Santro.