The much-waited automotive extravaganza is on in Mumbai till January 22; passes can be booked online. 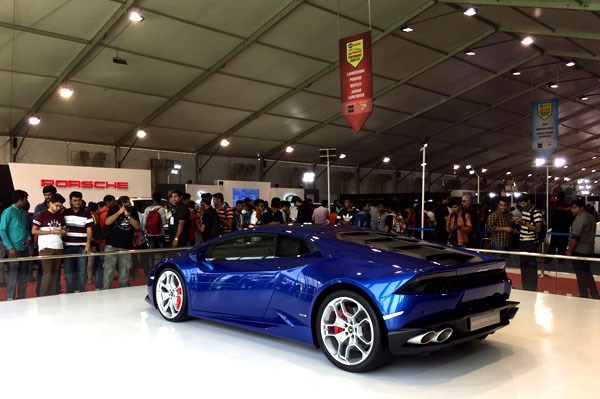 The Autocar Performance Show 2017 is live from January 19 at Bandra-Kurla Complex, Mumbai. Inaugurated by actor, model and auto enthusiast, John Abraham, the Show will go on till January 22. The highlights of the Show, gauging from the reactions from the crowd, are the supercars on display, including the Lamborghini Huracan, Nissan GT-R, Ford Mustang, Porsche 911 and Mercedes-Benz C43 AMG.

Supercars, however, are not the only cars on display. Visitors can also check out the freshly-launched Maruti Ignis and Tata Hexa, as well as existing market favourites such as the Maruti Baleno, Porsche Macan, Range Rover Evoque, Tata Tiago, Renault Duster, etc.

Autocar Performance Show 2017 will also play host to the first unveiling of exclusive editions of some cars. Ford put on display, for the first time ever, a new top variant of the EcoSport. This variant, called ‘Platinum’, comes with a dual-tone paint scheme, blacked-out roof, tweaked bumpers, larger, 17-inch diamond cut alloy wheels, a touchscreen infotainment system with navigation, cruise control and a rear centre headrest. It will be available with the 1.0-litre EcoBoost petrol and 1.5-litre diesel TDCi engine, and will be priced at Rs. 10.39 lakh and Rs. 10.69 lakh (ex-showroom Delhi).

Renault used the Autocar Performance Show 2017 to launch the new special ‘Live for More’ edition of the Kwid. Featuring cosmetic changes, this special edition is available with both the 0.8- and 1.0-litre engines and both the manual and AMT transmissions. The cosmetic changes on the outside include a new contrast-coloured roof-mounted spoiler, grey and red graphics along the bonnet, roof and doors, along with red accents on the grille, wheel covers and roof rails. Changes to the cabin include a new steering wheel cover with red stitching and red inserts on the door pads. Equipment levels carry forward unchanged. The Kwid ‘Live for More’ edition will be priced from Rs. 2.39 lakh (ex-showroom, Mumbai).

For those who prefer two-wheelers, manufacturers such as Suzuki, Triumph and Benelli have set-up stalls stocked with their range of motorcycles, including big bikes like the Triumph Rocket III and the Suzuki Hayabusa. Bajaj had put up its latest bike, the Dominar 400, while TVS had racing as well as road-legal versions of the Apache RTR 200 and some of its off-road bikes on display.

Students clicking away at the cars and bikes was a common sight, perhaps on account of the ‘Intern with Autocar’ contest. The best photographer to submit his/her entries to this contest will win an internship opportunity with Autocar India.

The live experience zones, namely the Tata Hexa 4x4 Experience Zone and the Maruti Suzuki Autocross were just warming up. Expect more action in these zones over the weekend.