Track-only derivative of the T50 to be powered by a re-engineered Cosworth V12 with over 710hp; limited to just 25 units. 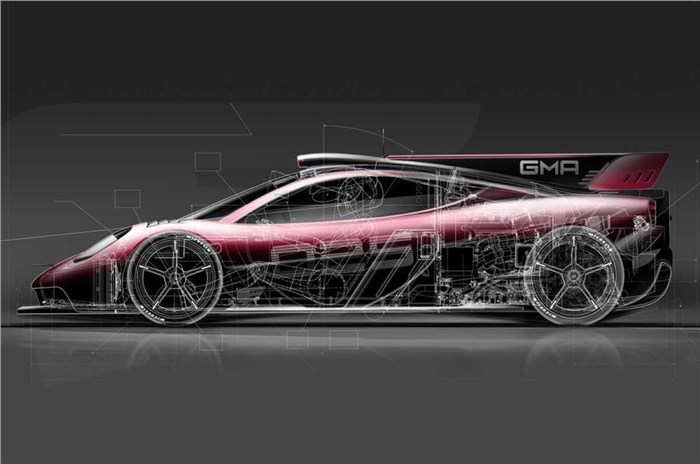 Gordon Murray Automotive (GMA) has confirmed it will produce a racing version of the recently revealed T50 supercar.Codenamed T50s, the track-only variant will feature extensive revisions that promise to make it even lighter than the road-going version, at just 890kg.

What cosmetic changes will it get over the standard GMA T50?

On the cosmetic front the T50s will receive a significantly upgraded aerodynamics package. The road-going T50's signature rear-mounted fan will be paired with a new rear wing, new front splitter, underbody aerofoil and adjustable diffusers. The track-car will also feature a new mounted aero fin to boost cornering stability.

Combined, the changes allow the T50s to generate more than 1500kg of downforce and 2.5-3g under braking.

Unlike the road car, which has multiple aerodynamic modes, the T50s will run in High Downforce mode at all times, with the diffuser ducts fully open and the fan running permanently at 7000rpm.

Ride height has been lowered by 40mm front and rear, oil cooling systems relocated to improve airflow to the rear wing and new brake ducting added to assist with temperature management. Forged magnesium wheels significantly reduce the car’s unsprung mass, but as per Murray's insistence that supercars don't require bespoke tyres, the T50s will ride on Michelin Cup Sport 2s.

What are the changes to the cabin?

Stripping back the interior has helped shave 94kg compared with the road-going car, with air conditioning, infotainment, storage and sound-deadening materials all removed. Road-going displays have also been removed, with performance-focused information moved to an F1-style rectangular steering wheel.

The centrally positioned driver's seat has been exchanged for a carbonfibre racing bucket with a six-point racing harness. One of the two passenger seats has also been deleted in the name of lightness.

What are the changes to the engine?

The Cosworth-developed naturally aspirated V12 in the T50s will feature revised cylinder heads, a higher compression ratio and an all-new free-flow exhaust system boosting power to over 710hp.

According to Murray himself, this was only possible in a track car, which doesn't have to contend with noise or emission regulations. The road car’s 6-speed manual has been replaced by a new 6-speed unit, with new drive ratios and paddle shifters.

According to the company, the T50s will carry a "historically significant" name, which is set to be announced later this year alongside the official reveal of the car. This suggests it could carry the GTR name seen on track-only versions of the Murray-penned McLaren F1, to which the T50 is a spiritual successor. There's a chance it will reference the BT46 designation carried by the original Brabham fan car, also designed by Murray.

When will it be revealed and what will it cost?

A total of only 25 examples of the T50s will be made with the car expected to be revealed later this year. Each example will cost £3.1 million (Rs 30.09 crore) before taxes - a substantial increase over the road car's £2.36 million (Rs 22.90 crore) plus taxes. Over half of the production run had already been accounted for before the car's existence was revealed to the public.

GMA is also discussing the potential for a GT1 sports club and race series with the SRO Motorsports Group, with Murray's team offering a full range of pit, garage, and support equipment for owners. Owners will receive a 'Trackspeed' customisation pack that includes set-up, training, racing and support, with options to fine-tune suspension and chassis balance to suit their driving style.