Triumph gives their hot-selling ADV a significant update. We get to experience it first-hand, in exotic Morocco. 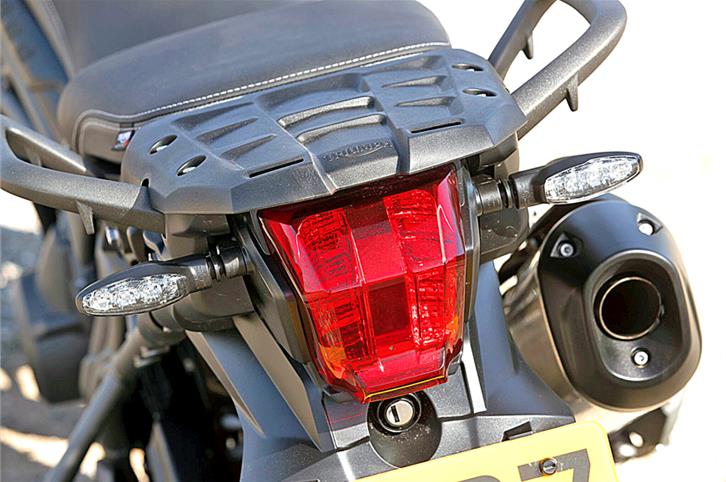 It's one of the most wonderful feelings when you’re riding in a harsh environment, especially when you and your machine are fully prepared for the task ahead. The thick, multi-layer adventure gear meant I was warm and comfy despite the 6deg air temperature and snow all around, as we climbed the foothills of the stunning Atlas mountain range outside Marrakech. As for the Tiger 800 – well, it’s as much of a juggernaut as it's ever been but the whole experience has been significantly refined and polished with the new update. So there we were, the Tiger’s new aerodynamics doing a good job of keeping the icy blast off my upper body while the heated grips and seat were quickly proving to be one of life’s finer pleasures on a motorcycle.

How new is it?

You wouldn’t think very much by simply glancing through the spec sheet and Triumph says they haven't touched either the frame or swingarm for this update. Still, the company claims over 200 changes and a lot of that goes into the bodywork. Aside from the fuel tank, all of it is revised and the new headlamp lends the bike a slightly slimmer look, although the overall dimensions haven’t really changed. Only the top models get a full-LED headlamp; but the LED DRL is also available on the mid-spec bikes and they look sharp in a rear-view mirror.

Part of the new bodywork is a new adjustable windscreen that can quite easily be manipulated with one hand. The windscreen works in conjunction with new aero deflectors. The whole set-up does a good job of keeping most of the wind blast off the rider while allowing a small amount of refreshing air through. There is still a hint of helmet buffeting at high speeds – especially for tall riders – but it’s not very intrusive. Moving to the rear, there isn’t much in the way of bodywork and the Tiger continues with its bare and functional-looking tail section that’s made up exclusively of the exposed sub-frame. What Triumph has changed, though, is the seat material. The new seat is one of the best I’ve experienced – it feels soft, on top but is also very supportive, on long rides. Both the top-spec XRt and XCa get heated rider and pillion seats.

A big part of this upgrade comes in the new TFT display and premium switchgear, including the 5-way joystick that goes with it. This is a similar system to the new Tiger 1200 and the Street Triple RS; and it's both excellent to look at, as well as easy and intuitive to use. The new screen is available on mid models and upwards with a couple of viewing modes saved exclusively for the top model. Cruise control, however, is standard – except for the base XR.

What about the mechanicals?

The basic Tiger frame sees no change with this update but there’s a lot of work that’s gone into the in-line three-cylinder engine. Power figures are similar to its predecessor at 95hp and 79Nm of torque; but the British brand claims that effort has gone into making the engine smoother and more reactive. Among the numerous internal changes are a new crankshaft and a new clutch. Triumph has also reduced the first gear ratio by 12 percent – which brings in numerous benefits, including better low-speed tractability, brisker acceleration and reduced demand for clutch-slip in slow off-road conditions. Finally, the exhaust system is more compact and lighter and it barks out a louder, crisper tune with far less of the typical Triumph exhaust whine. This, we like very much!

Beyond the engine, Triumph has also given the range-topping, road-biased XRt a fully adjustable fork by Showa while the lower XR models will continue with a non-adjustable fork. The XC models carry forward the previous fully adjustable WP suspension; but there is a new addition to these models that comes in the form of Brembo brakes, which replace the Nissin units on the middle and top-spec bikes.

In terms of the actual riding experience, the Tiger 800 remains delightfully familiar. Throttle response is smooth and mellow and the engine continues to offer tremendous tractability. The 6th gear is genuinely all you need, upward of 40kph. A look at the torque curve will explain why this is possible – the motor produces over 70Nm, all the way, from 2,500rpm to 9,500rpm. What’s noticeably improved, however, is the freer revving feel of the engine. Overall, the motor feels quicker to spin up and more eager to respond. The shorter first gear ratio no doubt helps, in this regard. For an engine that's already renowned for its smoothness, it is really something that Triumph has further improved refinement and responsiveness. The 6-speed gearbox is also delightfully precise; but there’s no slip and assist clutch, which means the lever still has a fair amount of weight to it.

We had plenty of time on both the XRt and the XCa, each the top model in the XR and XC range, respectively. Thanks to its smaller 19-inch front wheel, the XR is more agile and involving in the corners and you soon get to the pace where you begin to scrape the rather low-set foot peg feelers. The new Brembos offer good braking performance further in the lever travel; but initial bite is fairly soft and tuned that way to go with the Tiger’s off-roading ambitions.

As a fast road bike, the XRt is fun – but there’s still some vagueness in the front-end and it's no Multistrada 950 in the corners. That being said, it should quite easily prove to be more comfortable and capable almost everywhere else. However, hopping onto the XCa immediately highlights that this is the more comfortable road bike, thanks to its longer suspension travel. The XCa also has more ground clearance so it doesn’t scrape its foot pegs, as often; but the downside is the typically numb feeling that comes off the large 21-inch front wheel, which means you won’t end up pushing the bike as hard, on the road. It’s also worth considering that the XC has a taller seat height than the XR (810mm vs 840mm) and both seats can be raised by a further 20mm if the rider prefers a taller perch.

Both the Tigers are not outright sports bike-like but prove to be good fun on a winding road. Then again, that’s not what they’re all about. On day two of our ride, we got to experience the XCa fitted with optional Pirelli Scorpion Rally tyres. We rode through stunning scenery consisting of mostly dry tracks and rocky riverbeds in the middle of a barren desert landscape peppered with crests and drops. It was a clever route choice not too tight or technical and with plenty of fast stretches to really use some of that power. The XCa was a joy in this terrain, the suspension beautifully soaking in all manner of bumps and rocks while the tyres produced a confidence-inspiring grip. Big ADV bikes can be intimidating, off-road but in terrain like this, the XCa was a lot of fun for almost everyone who rode it, despite very different skill levels. Our ride back to the camp site showed that they work decently well on the road, too; but you do need to get used to the sensation.

Helping our expedition off the tarmac was the new ‘Off-road Pro mode’ which is available exclusively in the top XCa. It essentially turns off all electronic assists, including traction control and ABS. I would not fool myself into thinking I’m that good, though. Thankfully, the mode can be individually set-up to allow throttle response to remain in off-road and keep traction control turned off – but continue to keep off-road ABS (front only) activated. All in all, the new Tiger offers up to 6 modes on the top XCa, specifically Road, Sport, Off-road, Off-road Pro, Rider (fully customisable) and Rain. Meanwhile, the XRt misses out on Off-road Pro, while the middle XRx and XCx both miss out on Rider mode. Continuing Triumph's trend of offering precious little kit on the base bike, the XR offers just Road mode.

When can I buy one?

Triumph will launch the new Tiger 800 in India soon after the Speedmaster and Tiger 1200 and we expect this bike to arrive sometime in April, or thereabouts. Triumph isn’t commenting on this; but as with last time, the initial priority will probably be on the base XR and XRx models for road and the XCx and XCa models for off-road. From our experience so far, the XC proves to be the more capable machine and one that better suits the role of an adventure bike. The only real downside is that it's spoked rims don't support tubeless tyres. That and of course, the price, as the XC models will be priced higher than the equivalent XR. We believe the prices will go up a bit from the current Rs 10.87-14.37 price range; but it will be interesting to see how Triumph responds to BMW’s competitive pricing for the new F750 and F850GS.