The Sunny now gets a diesel heart, but can it topple the segment champ, the Skoda Rapid? 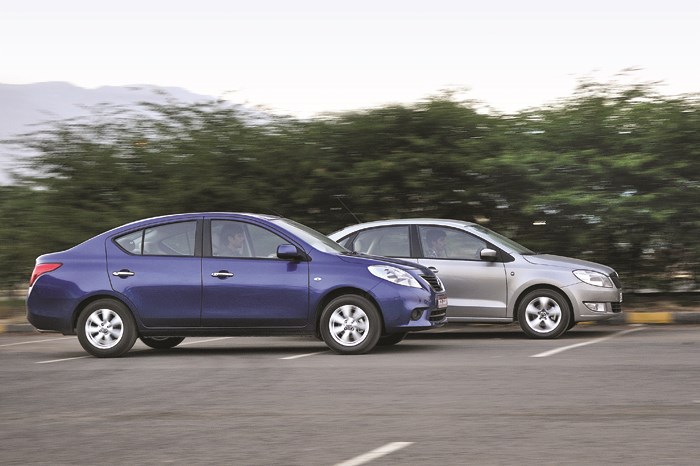 The sunny won't excite keen drivers. Low speed ride feels a bit skittish but it gets much better with speed. 1.5-litre motor has linear power delivery and is refined..

Fit and finish is good on the Sunny.

After we drove the Sunny in petrol guise, we felt that with a diesel engine under its hood, Nissan’s new saloon could become a sure-shot winner. But when the Sunny diesel was finally launched at the end of last year, Nissan priced it a bit too ambitiously. It’s a probably a reflection of the confidence Nissan has in its new mid-sizer which is poised to turn the fortunes of the company around. So will customers see the Sunny in the same light? Let’s remember that this car deftly straddles the lower and upper ends of the mid-size segment, but now in diesel guise, it comes perilously close to the more upmarket Skoda Rapid, which is our current champ. So is the addition of a frugal diesel to the practical Sunny worth the extra money? Or does it make sense to fork out around Rs 25k more for the Rapid?

With its class-leading 2600mm wheelbase, the Sunny is a very big car, but what is astonishing is that despite its size, it is a full 108kg lighter than the Rapid which is a great tribute to Nissan’s lightweight V-platform on which the Micra hatch is also based. The Sunny’s big dimensions and splashes of chrome give it a distinctive and mature stance, and from many angles it looks like a mini Teana. The large rear houses a spacious 490-litre boot, but the downside to this is a massive rear overhang which ruins the car’s proportions. The bulging bumper and thin tyres don’t help, and when viewed from the rear it looks quite odd.

The Skoda Rapid on the other hand has none of these problems. The Rapid is basically a Volkswagen Vento with the traditional Skoda nose stuck on it. But it does look attractive in the flesh and the combination of a large grille in the company of a chrome strip and big headlights lends it character. The side of the car remains unchanged, which means the Rapid, like the Vento has a rather boring profile, but it looks more balanced than the Nissan. The altered bootlid, taillights and rear bumper don’t look out of place either. While the Sunny looks more distinctive the Skoda definitely has better proportions.

The Sunny diesel’s interiors reveal no significant changes over the petrol model and hence feel very familiar. In fact, there are lots of Micra carry-overs like the entire dashboard – only the music system and central air-con vents are different. The interior plastics don’t feel as rich as the Rapid’s and some of the buttons don’t have a quality feel either. But there are plenty of good bits too. The chrome highlights look good and the big AC controls are easy to use. Also, the driving position is slightly elevated and, thanks to the skinny A-pillars and large glass area, visibility is really good. This makes life in crowded streets much more manageable. A more supportive front seat would have been welcomed, though. Also, the grey colour of the dash looks a bit dull and the Sunny’s cabin could have done with some richer textures.

The Skoda Rapid’s interiors are all but identical in design to the VW Vento with similar quality levels that are a notchabove the Sunny’s. Overall, the plastics feel rich but there are some low-rent surfaces on the door trim and the lower dash. This saloon, made for emerging markets like India, clearly isn’t built to the same uncompromising standards as other Skodas, but next to the Sunny it’s a cut above.

The Rapid’s ergonomics are spot on.  The driving position is really comfortable with the steering, seats, pedals and gear lever positioned exactly where you want them to be. We also loved the front seats, which have generous thigh support and cushioning with just the right amount of firmness. The Rapid has the most comfortable rear seat as well. Again, thigh support is good and you are sat at a decent height. The backrest is a touch too upright though. The Sunny may have more rear space than the Rapid, but the seat itself lacks sufficient thigh support and the seat squab is a bit too short as well.

The Sunny gets one back in being the better equipped of the two. It comes with steering-mounted controls, climate control and auto-folding mirrors – features absent on the Rapid. The Rapid is the more sparsely equipped, despite having features like the clever lever behind the front passenger seat that allows the rear-seat passenger to push the front seat forward.

The Sunny uses the same 1461cc common-rail motor as the Micra, but it has been tuned for more power and now produces  a healthy 84bhp and 20.39kgm of torque. Initial engine response is good and there’s very little turbo lag. This engine’s petrol-like linear power deliver makes it extremely easy to drive in town. Even on the highway, it doesn’t feel out of breath thanks to strong mid-range performance, and the Sunny cruises very well. But past 3800rpm the engine doesn’t have too much to give and it’s best to short-shift to keep the engine in the meat of its powerband. With power tapering off early, you have a narrow band to play with and the Sunny’s outright performance is a far cry from the Rapid’s. Our timing equipment confirms this — the car takes 12.89 seconds to reach 100kph and this figure, though respectable on its own, looks ordinary next to the Rapid’s, which is a good 1.4 seconds quicker. The Sunny’s motor however is quite refined and it’s only when you work it hard that it sounds like a diesel.

The Skoda’s 1.6-litre diesel is marginally bigger, but it’s significantly more powerful than the Sunny’s Renault sourced K9K motor. But in traffic, the Sunny’s linear power delivery is easier to cope with than the Rapid’s sudden power spike past 1800rpm. However, the Rapid always feels like it has a surplus of power. Throttle response is crisp, the VW EA 189 motor is free-revving and power doesn’t suddenly fall off. There is a constant surge till the engine runs out of revs. Drive the Rapidon the highway and it lives up to its name. It’s an effortless cruiser and the potent mid-range gives it very effective overtaking capability.

The Rapid’s biggest drawback is the sharp diesel clatter it has at idle. Once on the move, the engine smoothens out, but even then it’s loud enough to remind you that there is an oil-burner under the hood.

Both cars have a similar independent front and non-independent rear suspension layouts, but variations in their setup means there is nothing similar about how they behave on the road. The Sunny’s ride feels a bit skittish at low speeds and though the front suspension is stiffened on the diesel version, it never feels as pliant as it should. You can also hear the suspension thump through the light body. At speed though, the Sunny’s ride evens out and it feels pretty flat and consistent. Straight-line stability is impressive too and the Nissan feels composed even at three-digit speeds. Like its looks, there is nothing sporty about the way the Sunny attacks corners. Its handling feels safe and predictable with decent body control and no nasty surprises. But it simply doesn’t have a surplus of grip or a communicative steering, and it’s certainly not a car that enjoys being hustled. The light steering, linear power delivery and easy controls make it a
stress-free car to drive in the city though.

With its stretched wheelbase and pliant suspension, the Rapid’s ride is pretty decent, especially at low speeds where it does a great job of filtering out sharp edges. However, when you up the pace, the Rapid’s soft setup gets the nose pitching on an uneven surface, which can be disconcerting especially when you are braking. And while the light steering is both direct and precise, it’s a bit numb at highway speeds. As a result, the Rapid isn’t too much fun to drive, and that’s a shame given the performance on tap. What’s nice is that despite the bags of torque it produces, torque steer is minimal, allowing you to open up the throttle at every opportunity.

The Sunny shines in many areas. Its class leading space, easy-to-drive nature, and long list of standard features make it a very good proposition. Its 1.5-litre engine is very efficient too. But you can’t get away from the fact that it’s nowhere near as nice to drive as the Rapid and doesn’t feel as premium either.

Yes the Rapid is sparsely equipped and it’s not as frugal as the Nissan but its solid build, generous seats and classy environment make it feel a notch superior. Add the punchy engine, better dynamics and smarter looks to the equation, the Skoda more than justifies the Rs. 25,000 extra you have to shell out.