We brought a varied selection of motorcycles to the track this year and while some impressed as expected, others pulled a surprise. 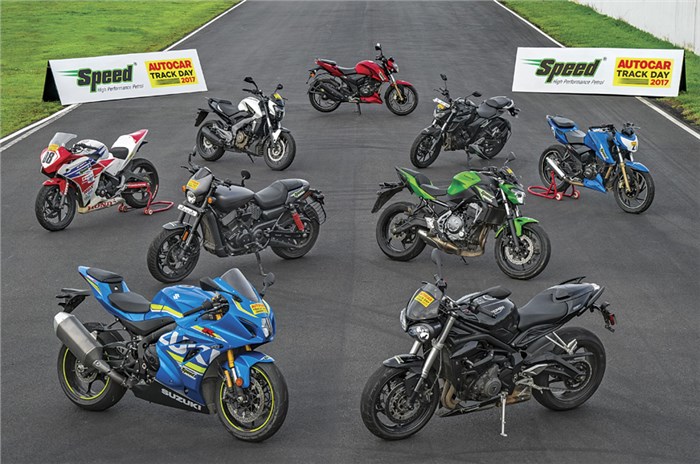 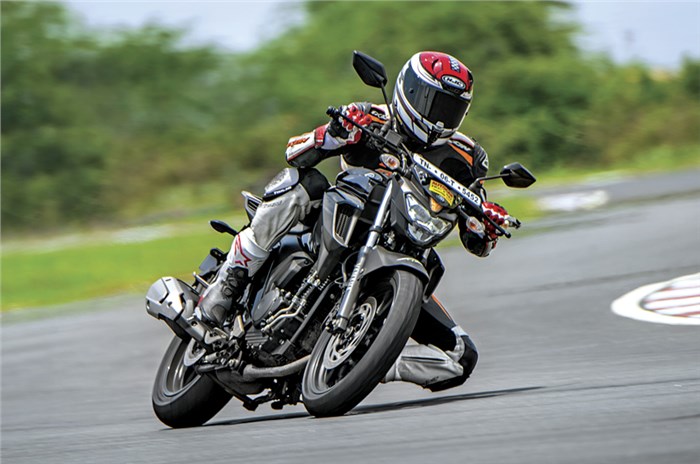 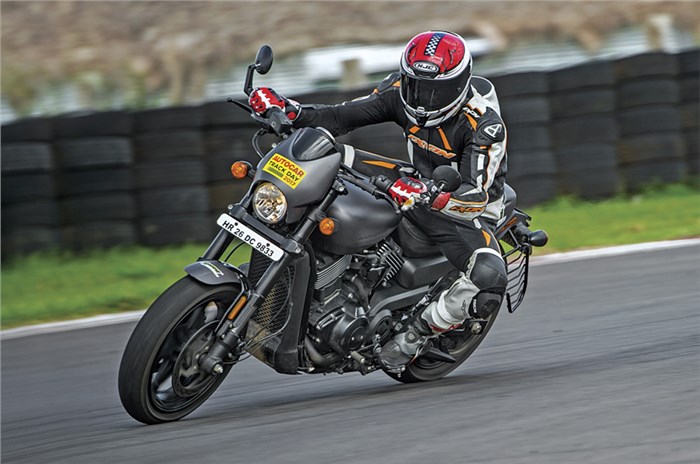 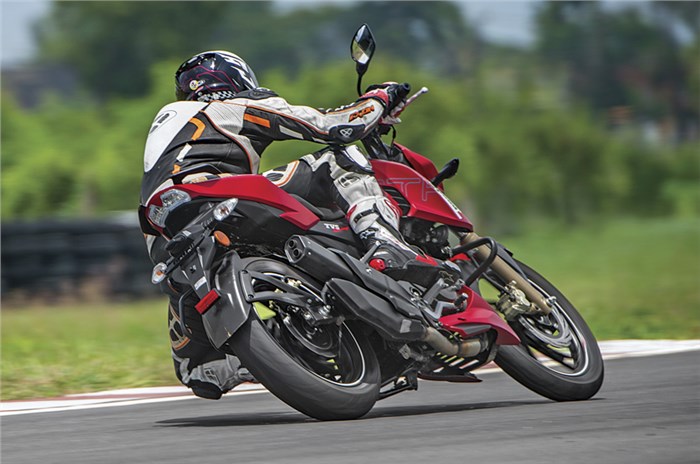 When it comes to putting a motorcycle’s abilities to the test, there’s no better place to do it than on a racetrack. The stopwatch shows no mercy, and in the quest to set a fast lap time, the motorcycle’s strengths shine through and its weaknesses are exposed. Talking about tracks, the Madras Motor Race Track (MMRT) at Sriperumbudur is a favourite for us as it is one of those rare circuits that works well for both small and big machines.

For this year’s edition of Autocar’s Track Day, we have nine enthusiast bikes spanning a wide range of price, power and purpose. The task of pushing these bikes to the limit is a daunting one and there’s no better man for this job than Rajini Krishnan. A veteran motorcycle racer with nine Indian National Road Racing Championships to his credit, Rajini earned the title of Malaysian Superbike Champion in 2015. This year, he stands third at this stage in the championship, despite a big crash at the recent race.

So let’s head over to MMRT and find out what went on at the track. 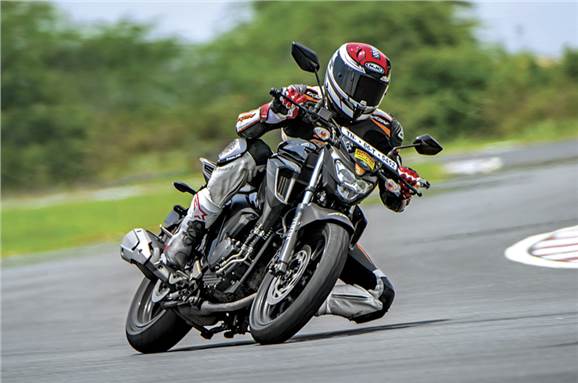 The FZ25 feels out of breath on track. Even the turn-in feels quite lazy.

Yamaha’s latest addition to the enthusiast segment, the FZ25, offers a comfortable, capable and confident experience instead of all-out sportiness. On the road, the FZ25 does the job well, but Rajini wasn’t impressed with its performance on track. He felt the bike lacked the power expected from a 250cc motor and felt out of breath on the track. He wasn’t happy with the chassis stability either, especially under hard braking, and felt the turn-in was quite lazy as well. While its smooth engine and ergonomics make it a neat road bike, for track riding, Rajini recommends the R15. 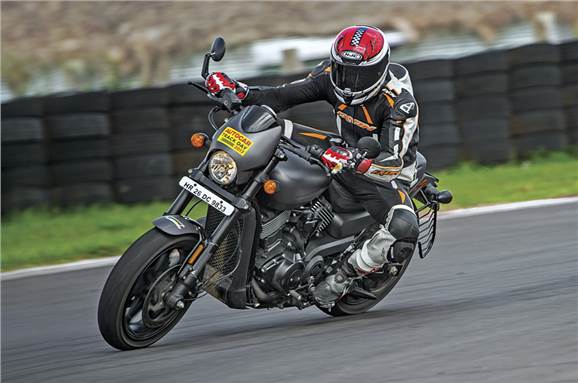 It will be more entertaining on twisty roads than on the racetrack.

The Street Rod is an attempt by Harley-Davidson to bring sportiness back into the picture. Derived from the Street 750 cruiser, the Street Rod gets a whole host of upgraded parts to enhance the overall performance of the machine and give it a sporty edge. With increased ground clearance and punchier engine performance, we were quite curious to see how capable this machine was on track. Once in Rajini’s hands, however, it wasn’t as sharp as we expected it to be. Its weight acts as a major anchor and holds it back in the nimbleness department. But that helps in mid-corner stability. So, while it doesn’t set impressive lap times, it certainly proves to be a whole lot of fun to ride. However, Rajini thinks the bike will be more entertaining on twisty roads rather than on the racetrack. 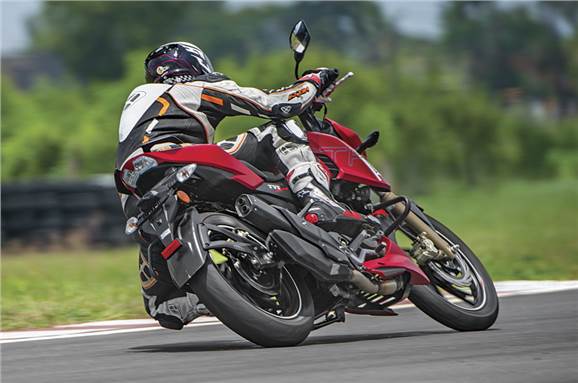 The chassis makes this a very easily flickable machine.

The RTR 200 has earned a reputation for being a quick and eager handler and it proved itself at the track. Rajini liked the sharp style and that the easy handling matched the way it looks. The optional Pirelli tyres on this bike did the job well and allowed him to push that much harder. The new chassis is a marked improvement for the track and he enjoyed the RTR 200 a lot more than the old RTR 160/180. Being a softly sprung bike, it took him a few extra laps to get accustomed to such a small and agile thing after the litre-class monsters he’s used to taming. If there’s one thing he’d have liked to see more of – power! 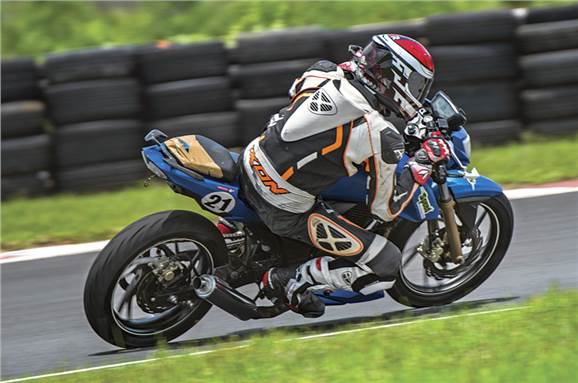 The race bike revs faster and pulls harder than the stock machine.

The TVS RTR 200 One-Make Race Bike is similar to its road-going sibling. The ergonomics have been left untouched, as have the brakes and Pirelli tyres, but the front forks are lower and stiffer here. The engine uses a more aggressive cam, a tweaked carburettor and there’s a loud, free-flowing exhaust to free up a few more ponies. The obvious difference is that the race bike revs faster and pulls harder down the straights. In fact, Rajini felt that first-time racers might be better off starting on smaller 150cc race bikes before graduating to this machine. The differences between the bikes were enough for Rajini to pull an impressive lap time that was a whole 4sec faster than the road bike. 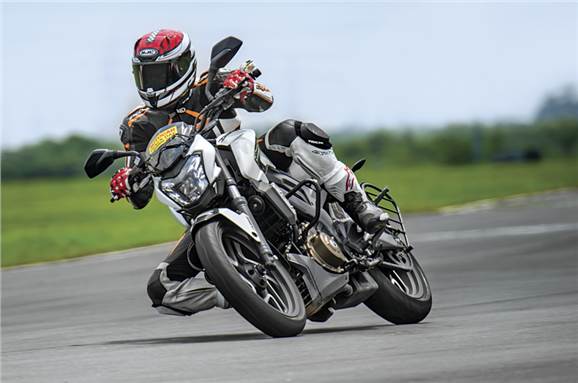 The front end is very heavy, but the engine does feel nice.

The Dominar is a relatively heavy motorcycle with a focus on stable handling rather than outright agility. Nevertheless, its 35hp/35Nm motor is quite punchy and has the potential for a good lap time. For the track, Rajini found the front-end to be too heavy but he liked the motor. Power delivery was strong but the low redline meant he would run into the limiter in the middle of the corner, more than once. Braking performance is very good, and despite hard usage, Rajini had no intrusion from the ABS. Chassis stability was excellent, but turn-in was difficult because of the weight. All said, the Dominar would be enjoyable on a fast, flowing road than the racetrack. 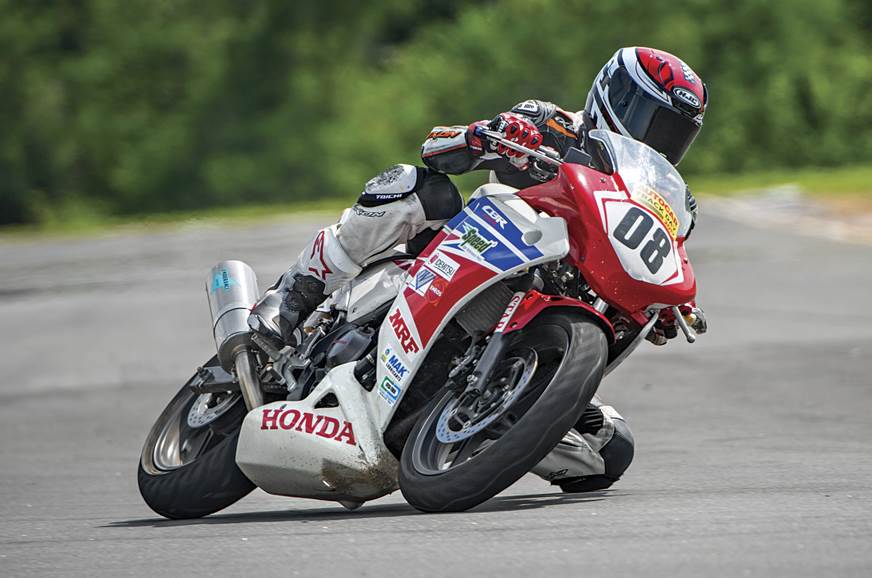 The engine and handling come together to set fast lap times

This bike has been developed by Honda Racing Corporation and features special bodywork, a programmable race ECU, a free-flowing exhaust, steering damper, pit-lane limiter and a quick-shift assist function. Aluminium rearsets generate a sporty position and riders can choose from different spring rates and oil viscosities for the front forks as well as multiple front and rear sprocket sizes. Rajini was pleased with engine and handling. But at this pace, he would have liked a more sophisticated suspension as there was some chatter at both ends when pushing hard. Nevertheless, for a 250cc machine, the lap times were impressive, not too far from the race-prepped RC390s and R3s that run in a segment above. 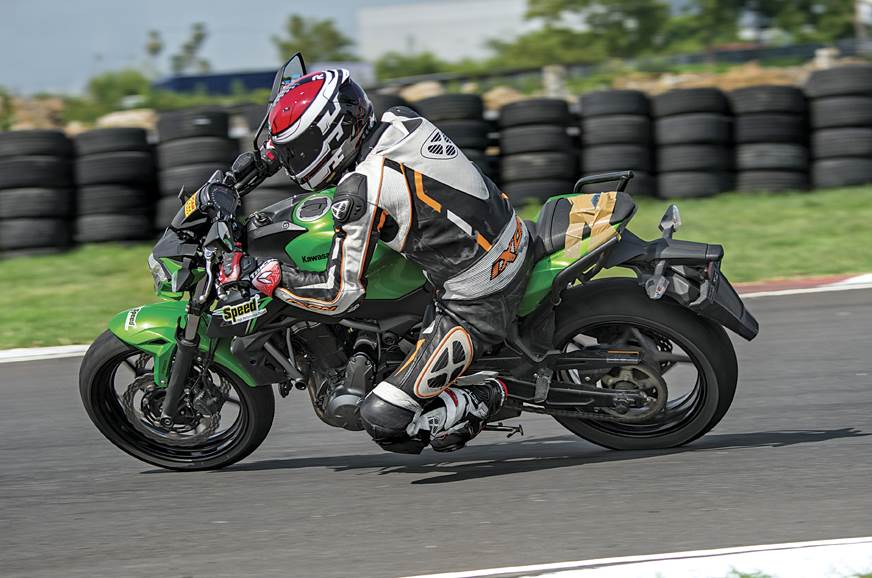 The engine is really impressive with its punchy nature.

On the street, the Z650 impresses with its compact size and behaviour. It’s quite stylish and has a really comfortable seating posture for road riding. On the track, however, Rajini found the suspension to be a bit too soft, and the bike did bottom out on a few corners. He felt a slight stiffening up of the suspension may benefit even on the road. Besides that, the braking power felt strong and the bike felt stable in most situations. Also, the engine, despite being a twin-cylinder, really impressed with its punchy nature all through the rev range. Overall, the nimbleness and size of the motorcycle are quite deceptive. In fact, even Rajini confused it for a 250cc at first, before he actually realised its true potential. 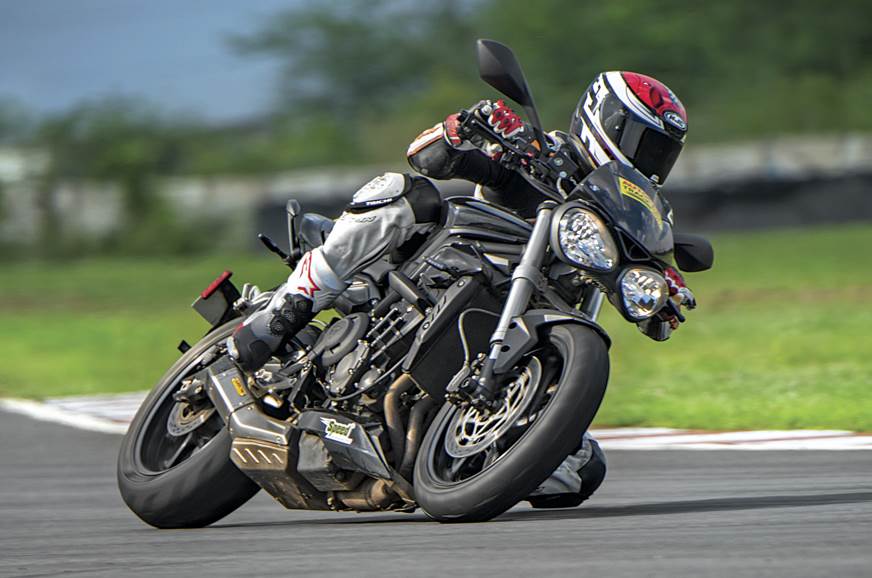 Lap time was only four seconds slower than litre-class bikes.

The previous Street Triple was a great bike and expectations were high for the new model. Thankfully, it didn’t disappoint. Still an easy motorcycle to ride fast, the Street Triple 765 S was blisteringly quick around the track, clocking a time just 4sec down than the fastest bike this year. Rajini was impressed with how good it felt on the track, despite being a road-going street naked, and had no complaints about it. The potent 765cc engine, nimble chassis and grippy Pirelli Rosso Corsa tyres helped the Street Triple S compete a level higher on the track, despite being a great road bike. As things stand, this is one of the best sub-
Rs 10 lakh motorcycles you can take to the racetrack. 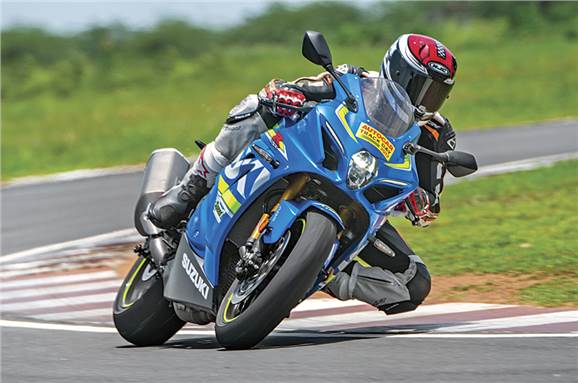 The new chassis and engine really enhance the ease with which it can be ridden.

Only having been recently launched in India, the Suzuki GSX-R1000R is a long-awaited update from Suzuki. The old machine was extremely potent but was starting to fall behind when compared to the newer litre-class machines. Well, with the new model finally here, we took it out to see how it stacks up in its home environment, the racetrack. The version here has an extra ‘R’ in its name, which signifies it gets some serious equipment. The new GSX-R for 2017 gets all the bells and whistles. It gets a five-axis IMU system, along with a 10-level traction-control system, Suzuki’s Low RPM Assist system, Easy Start System. The ‘R’ version also gets a quick-shifter, launch control, cornering ABS, and those ever-so-welcome Showa Balance Free forks. There is no wheelie control or engine brake control, although front-wheel lift is controlled through the traction control system itself. There are three different riding modes, each of which offers different power delivery options. It also offers slipper clutch and rear-wheel lift mitigation technology that engages the ABS via traction control to keep the rear wheel on the ground during hard braking.

After a few laps around the track, Rajini found that the new slimmer chassis and overall feel of the bike really enhance the manner in which it can be ridden fast. The new engine definitely is a gem. With the new variable valve timing (VVT), it’s got a much stronger mid-range that doesn’t need you to sift through the gearbox so much. And the top-end hasn’t sacrificed power either. Even the gear ratios feel perfect for the racetrack. However, Rajni would have liked to see a quicker lap time and more track-focused rubber, instead of the stock Bridgestone RS10s, would have certainly helped. That being said, this also has the potential to be a great road bike.