Triumph has started organising training sessions aboard the Tiger 800. We head over to Kamshet to find out what it’s all about. 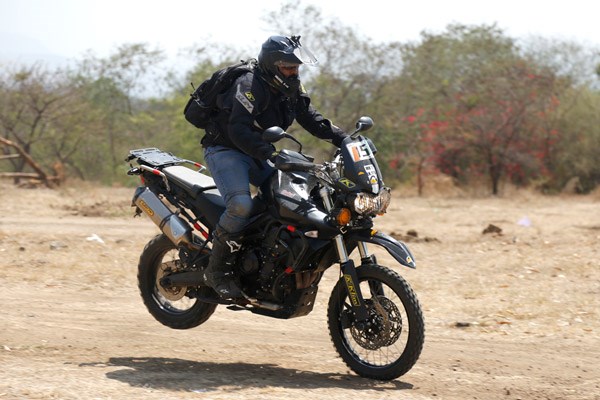 A little while ago, Triumph’s Tiger range of motorcycles has given starved Indian adventure enthusiasts something to realise their dreams with. But tackling the mucky bits on these big and heavy motorcycles could turn an adventure into a misadventure. So to help Tiger owners to go further and explore, Triumph taken up the initiative of creating a riding academy to train them on how to better handle off-road situations with the motorcycle. This event is accessible free of cost to Tiger owners and prospective buyers of the Tiger.

I was genuinely eager to get aboard the Tiger XCx. I had ridden the XRx a while ago and was mighty impressed with its cornering capability on well-paved twisty roads. The XCx on the other hand, seemed like it was the better bike for this off-road kind of scenario; what with its spoked wheels and extra suspension travel. As I swung a leg over the saddle, the differences started becoming apparent; this version of the Tiger sat higher off the ground, had a larger wind-screen and the handle-bars were wider. And it only got better once I got moving; ample amounts of suspension travel and a 21-inch front wheel smoothed out the rough terrain decently well. It’s amazing how much easier the job becomes if you just use the right tools. The Tigers felt like they had a lot of weight at the front-end; which means you need to be a bit watchful at slow speeds and muscle it while going faster.

The marshals had laid out a slalom course for the riders to understand how to manoeuvre the Tiger through tight turns. And of course, the technique that worked the best was to treat the Tiger like you would a motocross bike; tip the motorcycle into the turn while you lean away from the turn. Just look in the direction you want to go and that’s where the motorcycle will go. Always remember to look further ahead. Your body will automatically adjust the motorcycle to make you get to that point.

The second stage consisted of some trail riding, designed to teach the rider how to access hard-to-reach places. So I went for a walk around the track with the marshals before actually attempting it with a motorcycle. There were a few rock sections along the way that seemed pretty intimidating. It’s not every day you conquer sections like this on a 200kg plus motorcycle. And let’s also not forget that these Tigers come with a price-tag in excess of Rs 10 lakh; definite to dampen all thoughts of accidently dropping the motorcycle. Luckily, the ABS had been switched off on these motorcycles so braking was rather manageable. Now the XRx and XCx both come with traction control and different engine maps. And even though the motorcycles had been kept in off-road mode, the XCx’s traction control was a lot less intrusive than that of the XRx. The XRx kept cutting power at the slightest loss of traction; not something you want if you manage to get stuck on an uphill section with loose mud or sand.

They even made a water crossing somewhere on the farm. It was around afternoon by this point and riding through the water actually offered some much needed respite from the scorching heat that enveloped us. The mud had gotten pretty slippery on the exit of the water crossing, and one rider washed out and managed to injure his hand. Luckily, there were well-trained marshals stationed all over the track as well as an ambulance on standby. There was even a small section that had ice! This was perfect for replicating black-ice; that you tend to find on mountain roads at sub-zero temperatures. A little later into the afternoon, as the heat started to get rather unbearable, the ice started turning into a nice mud-coloured soup and the riders started to disperse. Needless to say, I joined the bandwagon and decided to leave as well. There comes a point where no amount of muck can cool you off. Some of the other riders stayed on for a third stage; it involved some challenging technical sections that went uphill, while slowly roasting the riders to a crisp.

This is an excellent initiative by Triumph Motorcycles-India, to encourage riders to hone their riding skills on their Tigers and get out and explore. This is the second event of its kind and Triumph intends to organise more of these in different parts of the country as revealed by Vimal Sumbly, managing director of Triumph Motorcycles-India. Open to owners of the Tiger and potential buyers, this academy is designed to expose the rider to different kinds of terrain and obstacles and how to manage all this on their motorcycles. All of this happens under the supervision of Vijay Parmar, rally veteran, president of Himalayan Motorsports and mastermind of the Raid-de-Himalaya. So, you can expect every rider that attends these events to walk away a little more capable than they were before.