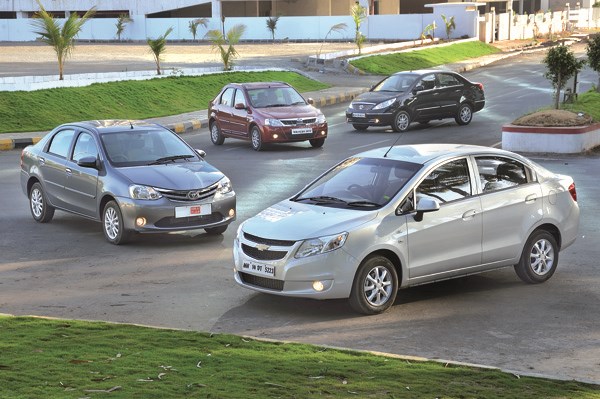 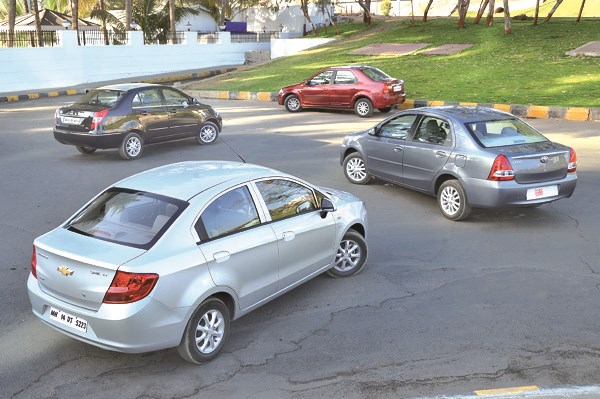 These saloons are big on space and practicality. But, which one makes the most sense?

The hot-selling Maruti Dzire, which is easily the most popular ‘saloon’ in our country and the Honda’s new  Amaze have made sub-four-metre compact saloons the rage in India’s wide and varied saloon car segment.

But squeezing a ‘third box’ within a four-metre footprint creates quite a few compromises by way of less cabin space and a smaller boot. If you have a full-size Indian family, the sub-four-metre saloon will be a squeeze. So what you need is one of the full-fat saloons you see here.

Of the four here today, it’s the Verito that’s the cheapest at Rs 7.20 lakh, and the Manza that’s the most expensive. But which one of these four cars is ideal?

The Tata Manza may have some really nice looking elements, like its smart alloy wheels, contrast roof and oversized, swept-back headlamps, but the tail section looks incredibly heavy and the nose looks a bit too short. The Verito and the Etios don’t fare much better. Despite the generous helpings of chrome and plastic embellishments, it’s easy to tell they were designed as basic saloons.

The Sail saloon is a bit of an exception here. With its split grille, upswept headlamps and rising beltline, it looks pretty neat. The Chevy manages to look quite smart, with the nicely arced roof flowing smoothly into the neatly integrated boot section. However, the 14-inch wheels look a tad too small, and the rear overhang is a bit too pronounced.

But like we said, these saloons aren’t about looks. What they are about is size, and at 4413mm, the Manza is the longest here. However, the Verito’s dimensions, namely its width and its wheelbase, point to it being the most spacious car inside, at least at first glance. The Etios and the Sail fit somewhere in between these two and, though they may not have class-leading dimensions, they do have generous measurements.

Being the low-cost saloons they are, none of them use very sophisticated suspension or brakes. The general formula here is independent, MacPherson struts up front and non-independent torsion-beam axle at the rear. Braking comes via discs up front and drums at the rear, and all but the Manza and the Verito use electrically assisted power steering systems.

Tatas have always been heavier than their competition and the Manza is no exception. At 1210kg, it is the heaviest here by a fair margin, while the Etios is the lightest at 1020kg.

The biggest letdown of the Sail is its interior. Hard plastics, boring colours, downmarket seat fabrics, uninspiring design – it’s all there and, sadly, it’s all rather obvious. Also, the ergonomics aren’t what we are used to. The power window switches are awkwardly positioned, the gearlever itself is placed a bit too far back, the small digital tachometer is hard to read, and the single-DIN audio system’s controls aren’t the most intuitive. The lift-type door locks are a bit low-rent too, and you’re also likely to rue the absence, even on the top LT spec cars, of steering-mounted audio controls.

Still, it is better than the Verito’s dash which, despite Mahindra’s efforts, feels the most simple here. But the ergonomics have improved (compared to the Logan) – Mahindra has moved the power window buttons from the centre console to the door pads and the old, single-DIN music system is now replaced by a larger, two-DIN one.

The Etios’ recent updates in the form of better colours and improved switchgear make a big difference. As for the Manza, it’s clear that it’s a step above all these cars from the moment you use the upmarket pull-type door handle. Step inside and you’ll like the way the faux leather seats look and also the feel of the black and purple dashboard. Then there are interesting bits like the touchscreen audio system and the interesting, if difficult to read dials.

As for the seats, they are large and accommodating, but curiously, aren’t as comfortable as they look. And the Manza has no place between the clutch pedal and the centre console for a dead pedal.

Toyota has got the seats spot on with the new Etios. They are perfectly cushioned and really supportive and it’s clear that Toyota has spent a lot of time on fine tuning them, which lends them a truly plush feel.

Front seat comfort on the Sail is good (though there’s no driver seat height adjustment or dead pedal), and visibility is nice too, but the cushion itself is a tad too hard. Like the Sail, the Verito doesn’t get seat height adjustment, but the seats themselves are comfortable, so all you have to do is get used to the high-ish seating position, which can be annoying if you are short.

Move to the rear and it’s the Manza that has the most legroom and headroom.

Rear seat occupants of the Sail will like the space on offer. There’s good knee room and headroom is also sufficient for anyone under six feet tall. But it’s the Etios that wins hands down on rear seat comfort. It is by far the most supportive and well cushioned rear seat here.

Now, looking at that huge, ungainly rear overhang, you would expect that the Manza has the biggest boot; it doesn’t. That distinction goes to the Etios, with its 595-litre boot. And it’s the Sail, with its hatchback-like 370-litre boot that can carry the least here.

The Manza feels a cut more refined than the others from the instant you start the engine. It is much quieter, a lot smoother and the quickest when driven flat out. The1.3-litre Quadrajet engine pumps out 89bhp and 20.4kgm of torque, and this is mainly why it is also the quickest here. However, when driven at normal speeds in traffic, you will find considerable turbo lag and an engine that only provides full boost when it’s spinning closer to 2500rpm.

The Sail also uses the same Fiat-derived Multijet engine as the Manza, with one difference – it uses a fixed-geometry turbo as against the Manza’s variable-vane turbo.

So, it makes less power (77bhp) and a bit more torque (20.9kgm). Like the Manza, there is some lag in power delivery, but the Sail wakes up earlier – at the 1800rpm mark. It is more responsive than the Manza and hence easier to drive. It isn’t all that much slower either, but the engine does get quite noisy when revved, so you tend to upshift early to keep things quiet and smooth.

The Toyota’s throttle response is immediate, and thanks to the small turbocharger (that takes less time to spool up) and the extra displacement, there’s little lag before you get into the engine’s strong mid-range. Gearshifts are slick and snappy, and the Etios also feels peppy thanks to its light kerb weight. It is only on the highway that you might wish for more than the 1.4-litre motor’s modest 68bhp.

It’s the same with the Verito. Its 1.5-litre motor is the biggest here, but it’s clear that Mahindra (or should we say Renault) has concentrated more on driveability than outright performance. So the Verito is even more responsive than the Etios off-boost, and this makes it very easy to drive in part-throttle conditions. However, you do sense a lack of power when you push on, the Verito’s engine making just 65bhp and 16.3kgm of torque.

The Verito’s ride has to be experienced to be believed. Its long-travel suspension is pliant, quiet and handles the worst of our roads (sharp bumps included) with aplomb. It easily outclasses the others here and this is one of the best things about this car. It also has the most secure handling at speed, thanks to the well-weighted steering (it is, admittedly, a bit heavy at parking speeds) and good body control.

The Manza rides well too, but it loses out to the Verito only because the rear suspension is a tad too soft, resulting in some bobbing when you drive over undulating surfaces – something your rear seat passengers might complain about.

You can feel the lightness in the Etios’ build in the way there’s quite a bit of ambient noise entering the cabin. Toyota did work on the NVH package and the Etios is quieter than before, but it’s still not as quiet as some of the others here. The reworked suspension is also a lot more comfortable than before, but the damping is still not as progressive as we would have liked and it is quite evident from the Etios’s sharp vertical movement that its suspension doesn’t have the long-travel, big-bump-absorbing qualities of the Verito’s.

The firmest ride here by a fair margin rests with the Sail. It’s stiff at low speeds and feels jiggly on rough roads. The flipside, however, is that it turns progressively flatter and more comfortable as you go faster. In the Sail, you can confidently ‘sail’ over bad patches, the stiff spring rates doing their bit to keep the car settled and secure.

The Etios, with its relatively light steering is the easiest to drive in traffic and the Manza, with its high-dashboard cowl and tricky throttle response, will require the most effort in the same situations.

The Manza is the most powerful and is the heaviest too, so it isn’t surprising that it is the least efficient here. It returned 11.6kpl in the city and 17.1kpl on the highway. The Sail, with its 75bhp motor is the third most efficient car in this test. It gave us 12.9kpl and 18.7kpl in city and highway cycles, respectively. The 1.5-litre DCi motor is renowned for its frugal nature and despite the Verito’s high 1140kg kerb weight, it managed 13.6kpl in the city and 19.3kpl on the highway. The Etios, thanks to the motor’s linear power delivery and light kerb weight, is the most efficient, with figures of 14.2kpl and 19kpl for the city and highway. But the Verito, thanks to its large 50-litre tank, goes the furthest on a full tank.

T he Verito will attract you with its price, its sheer space, its easy-to-drive nature and its brilliant ride. In fact, for most people looking for a full-size diesel saloon, it ticks all the boxes. But we think that its slightly wheezy engine (especially with a full load) and its rather ‘poor man’ interiors mark it down enough to take its winning chances away.

It’s for the same reasons that the Sail can’t win either. The interiors are too unappealing and then there’s the fact that it has a small boot, a stiff ride and hard seats.

The Manza is a strong contender – it’s got the space, it’s got the equipment, it’s got the ride and it is the most refined car here. But it’s not as effortless to drive as the others and is rather expensive too, especially for a Tata, and this means it falls short by a wee margin to our eventual winner, the Toyota Etios.

The Etios may be on the expensive side but we like what it offers. It is easy to drive, fuel efficient, has fantastic seats, enough space and a truly massive boot. It may not be the prettiest in this group, but for sheer practicality, it comes out on top. And when you factor in Toyota’s reputation for reliability, the Etios is hard to beat.