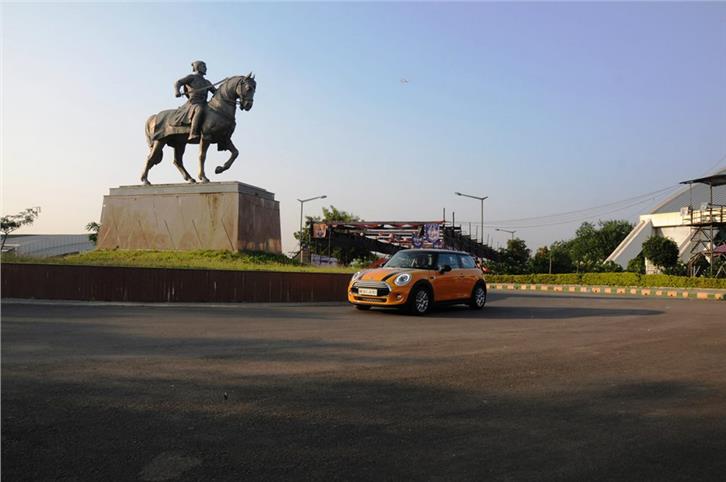 We head out early from Pune on the way to Goa in the New Mini Cooper D.

The start from Pune had to be very early. We were at Viman Nagar, which is at an extreme end of Pune, and had to get to the NH4 to be on our way to Goa. It meant cutting across the city, which would be a nightmare once the rush hour began. It also meant clearing the toll gate out, which could have you waiting behind trucks lined up for as much as a couple of kilometres.

So, while the sun itself was still groggily peering out across the horizon, we started out from the hotel. I had gotten my hands on the Mini for the first time and the empty, open stretches early in the morning were a blessing. We were quick to get out of the city limits, and thanks to that, the toll gate was also crossed within a very short time. The plan for the day was to try a route that's different from the one we’ve usually taken to Goa. While we follow the Bangalore highway (NH4), which is part of the Golden Quadrilateral, and turn off at Neepani past Kolhapur, this time, we decided to traverse a new and supposedly more scenic route via the Gaganbawda road. For this, we’d have to turn off the NH4 at Kolhapur and then take the Gaganbawda route out to Goa.

Unfortunately for us, the NH4 was in a pretty shoddy state. There were what seemed like a hundred diversions and sections that could hardly be referred to as a road. When we saw broken tarmac ahead, our hearts sank. The Mini’s suspension isn’t exactly the softest and the ground clearance is, after all, that of a hatchback. It took us completely by surprise then when the little Cooper trudged steadily across the potholes, craters and bumps without rearranging our spines. It was stiff, yes, but not as uncomfortable as you would imagine. It gave us that much more confidence about handling poor surfaces that were sure to come our way across the rest of the journey.

The turn-off into Kolhapur was a bit daunting. It was peak traffic hour and nearly everyone on the road was curious about this smart looker. Some bikers were inching a little too close for comfort to get a better look. To top it, when we asked a local about the directions to Gaganbawda, just to reaffirm the route the car’s navigation system had proposed, we were horrified to learn that it was not only terrible but far worse than the bumpiest bits of NH4 we had come across in the morning. With heavy hearts and the realisation that we’d just lost a fair bit of time on a rather long drive, we turned back onto the national highway.

We took the Neepani exit and made our way across some junior hills. The road was narrow, broken in places and passed through small villages. A unique thing we noticed was how most of the eateries by this road had a board that announced “meals are ready”. These establishments wanted to reassure travellers that a break here would hardly put a dent in their schedules and the service would be lightning quick.

By the time we got to Panjim in Goa, it was dark already. It had been a long drive, some time had been lost, some experiences had been gained. We all tucked into dinner at a popular Goan spot, Martin’s Corner, and very soon after, it was lights out.

While we’d lost out on scenery today, tomorrow we would be taking the coastal road to Mangalore. It promised to be amazing.