Six teams to participate with a total of 12 trucks; races will be held at the Buddh International Circuit in Greater Noida on March 23. 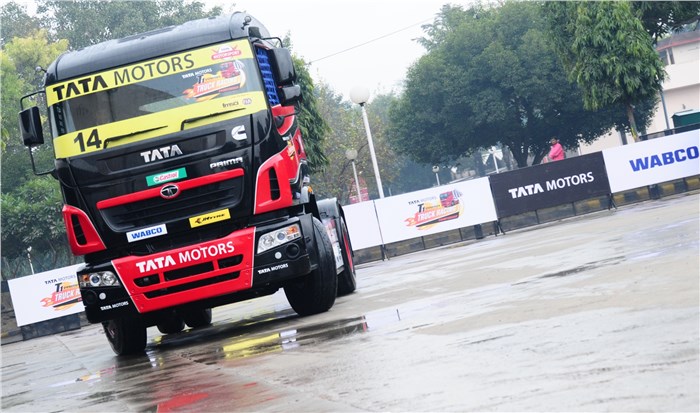 The championship will feature 12 purpose-built Prima trucks that make 370bhp and hit a top-speed of 110kph.

Tata Motors announced the launch of its T1 Prima Truck Racing Championship to be held at the BIC on March 23. Truck racing involves the use of modified versions of heavy tractor units on closed racing circuits. The sport had its roots in the United States but eventually became popular throughout the world, including in Europe and South America.
Currently, Truck Racing is an FIA-regulated sport in Europe – with the FIA European Truck Racing Championship running since 1985. The Indian edition will be held under the supervision of the FIA and the FMSCI. The race itself will be handled the MMSCI, conforming to the standards set by the British Truck Racing Association (BTRA).
The championship will feature 12 purpose-built Prima trucks that make 370bhp and hit a top-speed of 110kph. Tata claims to have made 22 specific modifications to get the trucks track ready, including tweaks to the fuel tank, brake cooling system, propeller shaft guards, racing seats, among others. Racing trucks look like their road-going counterparts and conform to preset regulations to ensure that the major components used are the same. Internationally, their maximum speeds are restricted to 160kph for safety reasons, and the minimum weight limit is 5500kg.
The event will consist of two races, the first is qualifying, followed by the main race (all races begin with a rolling start). The participants for Prima race include internationally acclaimed truck racing drivers. Most global truck manufacturers participate in Truck Racing championships around the world, including companies such as MAN, Mercedes-Benz, VW and Volvo.