Sainz, the 2010 Dakar winner, took the lead on Tuesday, but his time at the top was fleeting and ultimately cut short by a gearbox failure. 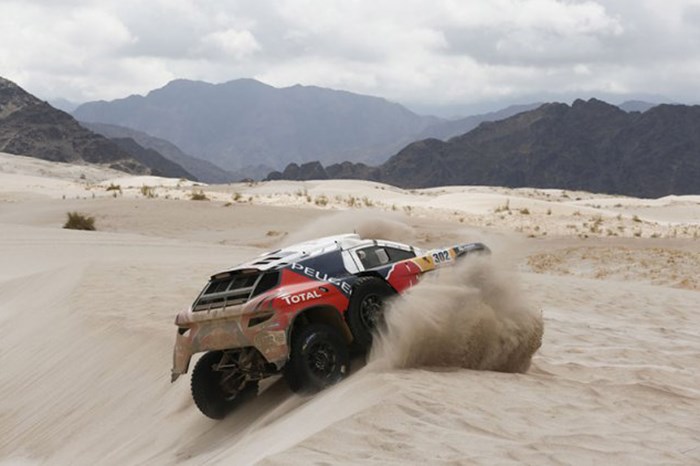 Stephane Peterhansel has moved into the lead of the 2016 Dakar Rally, after mechanical problems ended Peugeot team-mate Carlos Sainz's push for victory.

Sainz, the 2010 Dakar winner, took the lead on Tuesday, but his time at the top was fleeting and ultimately cut short by a gearbox failure.

The start of 10th stage was delayed due to thunderstorms, before Sainz got lost and then picked up a puncture, losing five minutes to the opening control point.

He then set a cracking pace to lead by seven minutes at the next interval, before Peterhansel reclaimed top spot for the day - and the overall lead - as Sainz fell more than 20 minutes behind.

There was worse to come, though, with the Spaniard's Peugeot crawling to a halt due to a broken strut between the engine and gearbox approaching La Rioja.

At the time of writing, Sainz was still stranded on the stage, waiting for assistance from his crew.

Peterhansel, who was cleared of a refuelling infringement pending an X-raid appeal, duly won the day's stage by five minutes over team-mate Cyril Despres.

He now leads the outright classification by exactly one hour over Nasser Al-Attiyah.

"We had a terrible start to the special," Peterhansel said of his own troubles.

"We got lost at 32km and wandered around for at least 15 minutes. I blew a fuse because I thought I'd lost everything.

"We took risks and threw caution to the wind. We pushed very hard because we knew today was the decisive stage.

"It was a stage with very tricky navigation, off-track sections, drainage channels... Everything that makes rally raid hard.

"As usual, this is where you see huge gaps.

"I had a flat tyre and started screaming my head off, I was a bit out of my mind today.

"However, when we got going, we were fast. We took a huge leap in the overall [standings]."

"We did a barrell roll after we hit an embankment 10km into the special, and it took us a while to put the car back upright," the Mini driver said.

"We had to take risks today. After that things got tricky because the car was damaged and we had to finish the stage without further problems.

"At the end of the day, I'm happy to make it to the finish.

"The ceiling and the cooling system were broken, and we had to stop several times to check whether everything was in order. Despite the adversities, we limited our losses.

"We're second overall, and now we have to try and defend this position."

Giniel de Villiers capitalised on Mikko Hirvonen's navigational problems to move into third place, while Sebastien Loeb - already more than two hours behind - was running third for the day before getting stuck in sand and losing more time.

He ended the day fifth, 17 minutes off Peterhansel's pace, and is ninth overall.

In bikes, Stefan Svitko took his first ever Dakar Rally win on a shortened Wednesday stage, edging closer to overall leader Toby Price in the process.

Sherco-TVS have plummeted down the order over the past two stages, with their bikes running 60th and 61st overall.