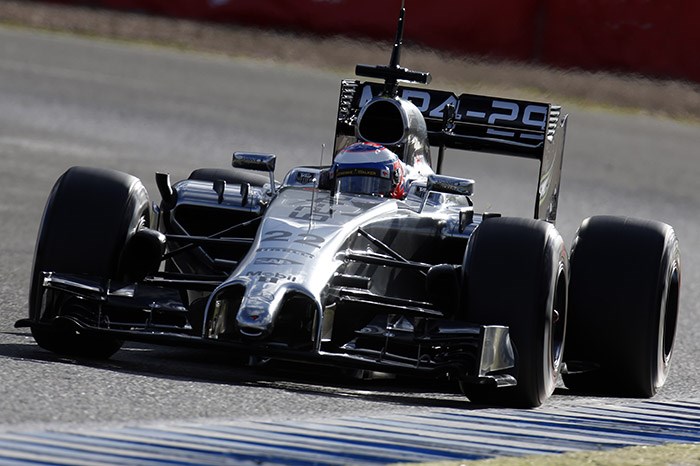 Jenson Button's McLaren topped the second day of pre-season Formula 1 testing at Jerez, as the Mercedes-engined teams demonstrated an early advantage in 2014.

Button topped the official wet-weather running in the morning, despite the MP4-29 not having appeared at all on day one in Spain.

The track dried after midday and drivers switched to slick rubber.

The McLaren was on top when Perez stopped at Turn 1 and brought out the day's second red flag, the first one having occurred when Sauber's Esteban Gutierrez spun into the gravel at Turn 5.

After the smoking Force India had been removed, Nico Rosberg's Mercedes, day one pacesetter Kimi Raikkonen (Ferrari), and the Williams of Valtteri Bottas all usurped Button's times.

Each had their time on top of the timesheets, but after a third red flag in the penultimate hour - caused by Marcus Ericsson's Caterham stopping - Button recorded a 1m24.165s on Pirelli's medium tyre.

Raikkonen ended up second with a 1m24.812s, while Bottas achieved a 1m25.344s on the special Jerez hard rubber to be third fastest with the FW36.

Perhaps more eye-catching, though, was Rosberg's day. Although he ended up only fourth, with a 1m25.588s on the normal Pirelli hard, the Mercedes driver was the only man to complete long runs, twice making it into double figures between pit visits.

He was able to lap consistently in the 1m27s and 1m28s on his final long run, which lasted for 24 laps.

His ultimate tally of 97 laps compared favourably with pacesetter Button's 43 and Mercedes ended the day by using flow visualisation paint on the rear of the W05.

Perez ended up fifth, well clear of Gutierrez, who never bettered 1m33s despite completing over 50 laps.

The Renault-engined teams struggled with a suspected energy store issue. Caterham's Ericsson managed the most laps with 11, but his best was nearly 14 seconds slower than Button.

Red Bull gave up running altogether after Sebastian Vettel had managed a handful of laps early on, while Toro Rosso failed to make it out at all.

The only other team scheduled to run at Jerez, Marussia, did take delivery of its car at the end of the afternoon and hopes to run on day three.