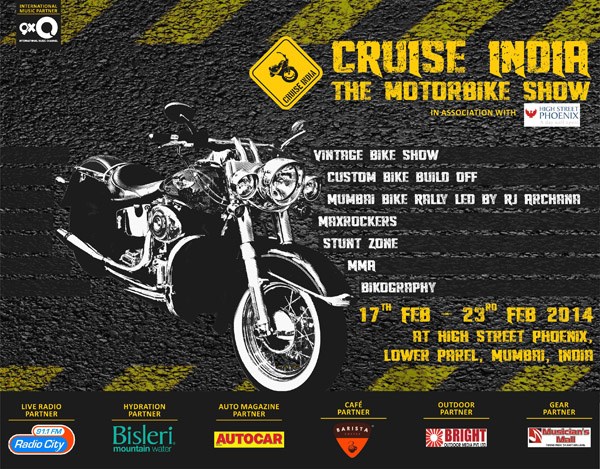 At the venue, there will be a vintage bike exhibition along with superbikes, cruisers and custom-made motorcycles on display.

Mumbai will host the first edition of the Cruise India Tour Bike Show that is being organised by Azure Marcom, a brand consulting firm. The event will be held from February 17-23, at the High Street Phoenix mall, Lower Parel. Azure Marcom intends to position the seven-day event as a networking platform for various biker groups from across the nation.
At the venue, there will be a vintage bike exhibition along with superbikes, cruisers and custom-made motorcycles on display. Additionally, a rock show, MMA fights, bike customs and brands workshops, tattoo workshops, custom bike build off and a stunt show will be held. There will also be an exhibition of bikers' photography at the venue.
A women’s bike ride will be flagged off with RJ Archana of Radio City as the lead rider, to promote women’s empowerment. The ride will end at BKC where a street play with a similar message will be staged.
The organisers plan to flag off the Cruise India Tour on February 20. As part of the tour, motorcyclists will ride 8,000km across the nation.
After the Mumbai show, Azure Marcom plans to host more motorbike shows in other cities across the country.