Special feature: In Pursuit of Victory - Renault & Formula One 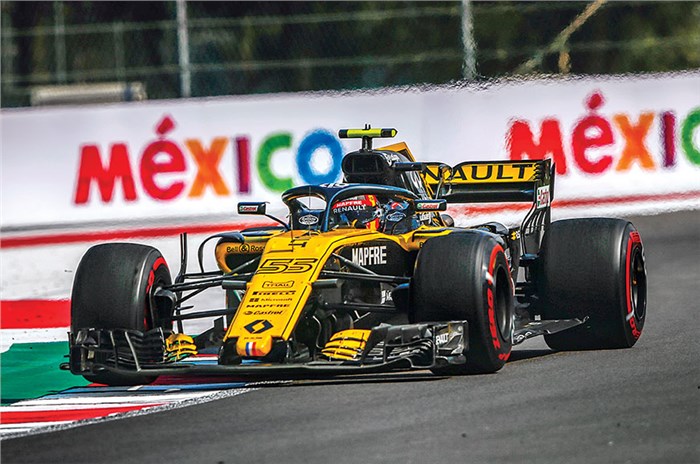 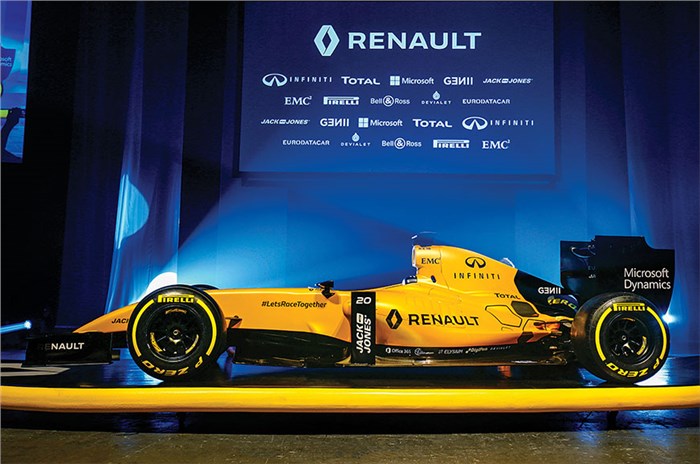 Renault unveil their distinctive yellow livery ahead of their works return to F1 in 2016.

Over 40 years of success in F1 hasn’t dulled Renault’s hunger for more. They’re back, and they’re here to win.

It’s the Saturday of the 2017 British Grand Prix. There’s a crowd gathered by the Renault Sport Formula One Team’s pit garage at Silverstone. Journalists, team personnel and guests mill about the garage housing the two R.S. 17s.

Qualifying ended hours ago. The two yellow and black cars – which Nico Hülkenberg and Jolyon Palmer will pilot in Sunday’s race – lie silent and snug under their tight-fitting tarpaulin covers. The gathered crowd spares them little more than a glance. Renault entered F1 with a full works team in 1977. Its RS01 was the first F1 car to be powered by a turbocharged engine.

Impressive machines they may be, belonging to a generation of the fastest Formula One cars ever built. But this evening, they’re just part of the scenery.

The car the crowd has really gathered to see is the one that started Renault’s Formula One journey, 40 years ago. They’re waiting to see the RS01.

The star of the show, the car – the first to be powered by a turbo engine in Formula One – sits at the end of the pit lane. Mechanics and engineers wearing retro team kit to celebrate Renault’s 40th anniversary give it the once-over, making sure everything is in order. Alain Prost back behind the wheel of his old race-winning RE40 as part of Renault’s 40th anniversary celebrations at the 2017 Monaco GP.

The car is the centre of attention – the subject of mobile phone lenses, camera shutters and admiring glances.

Anonymously amidst this hubbub, a diminutive Frenchman pulls on his overalls. He slips his fireproof balaclava over his sweep of thinning shoulder-length hair, and, helmet
in hand, walks out to the waiting car – emblazoned on its side is his name – Arnoux. 1977: Renault make their Formula One debut fielding a one-car entry piloted by Jean-Pierre Jabouille at the 1977 British Grand Prix at Silverstone.

It’s time. The starter motor whirrs. The 1.5-litre turbocharged V6 barks to life, warbling and burbling impatiently. The sound sends a ripple of silence through the crowd. Conversation stops. The ticking and burbling of the engine at idle, gives way to pure, primal, unadulterated noise as Arnoux eases off the clutch and drives away.

It’s July 15, 2017. But the calendar may as well read 1977. It is almost 40 years to the day since Jean-Pierre Jabouille fired up a similar RS01 at Silverstone to embark on a journey that would see Renault win multiple Grands Prix, drivers’ and constructors’ championships as an engine supplier and works manufacturer, combined. 1979: The breakthrough: Jabouille takes Renault’s first F1 victory at the 1979 French Grand Prix. It is a dream result – a French driver in a French car on French tyres burning French fuel winning in France.

As Abiteboul points out – Renault has a rich history in motorsport that only a handful of car manufacturers can claim to match. 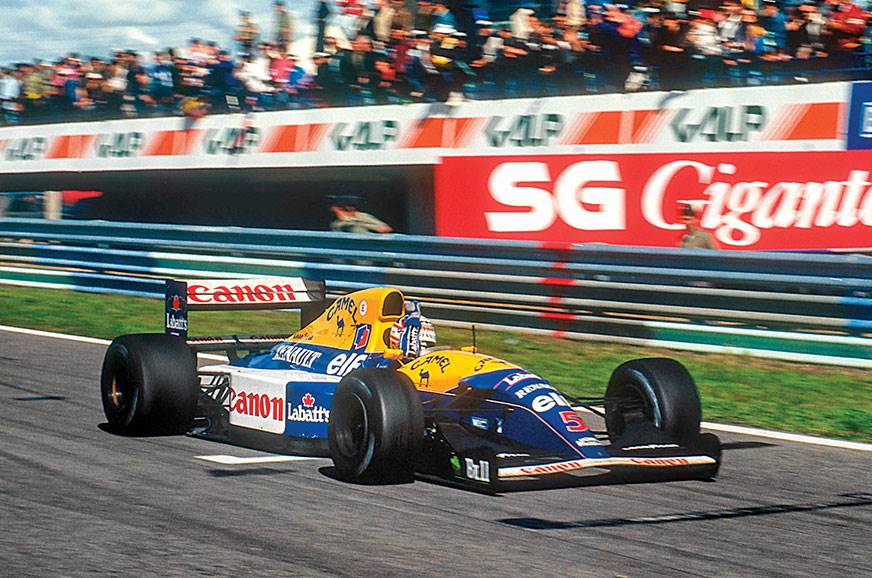 1992: Renault win their first championship as engine suppliers to Williams. Led by Nigel Mansell, this marks the first big success for a combination that would go on to dominate most of the decade.

The brothers Louis, Marcel and Fernand Renault, founders of the Renault car company, were using motorsport as a platform to sell cars before the term ‘grand prix’ was even coined – let alone before Formula One’s inception in 1950.

Marcel Renault, in fact, was fatally injured in an accident in the 1903 Paris-Madrid, a race which was halted and in which his brother Louis came in 2nd. 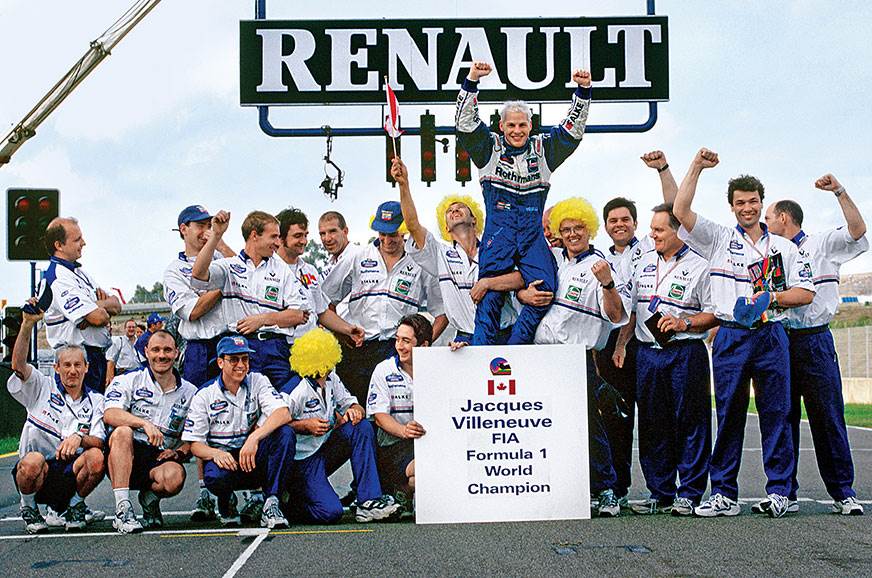 1997: Renault power wins every constructors’ championship and all but one drivers’ title from 1992-1997; but its joy is tempered by its decision to withdraw from top-flight F1 at the end of the 1997 season.

“The history of Formula One is also the history of Renault with motor racing,” French four-time world champion, Alain Prost, who won nine Grands Prix for Renault and is now the Renault Sport Formula One Team’s special advisor, told Autocar India at the 2018 Paris motor show.

“They have always been involved in all types of motor racing – not only F1, but also sportscar and rallying. So the DNA inside the company is very much for motor racing, but also innovation and new technology and being proud – as they have done for the turbo engine – to sometimes take a risk. We said at the beginning we are generalist, but we are not afraid to fight against the big ones. The culture is always there.”

By ‘generalist’ Prost means a mass-market car manufacturer; and Renault are the only ones racing in Formula One with a full works effort today. 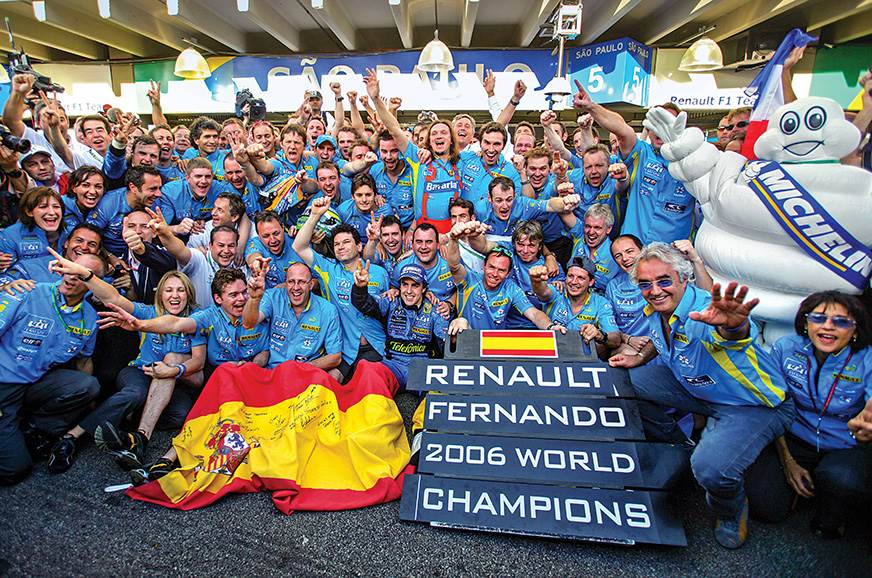 2005-06: Renault return to Formula One with a full works effort in 2002. In 2005, with Fernando Alonso behind the wheel, Renault usurp Ferrari as F1’s dominant force, winning both titles to chalk up their first title success as a constructor. They repeat the feat a year later.

The brand, in its 41 years in the sport, has alternated between being a full works entrant and an engine supplier to various teams.

But its association with the Williams team, whom Renault began supplying engines to in 1989 (a few years after it had mothballed its own team), would prove to be the move that paid dividends.

Having won races with its own team, the partnership with Williams brought championship success.

Together with the Grove-based squad and combined with the success of its own team later (and subsequently Red Bull), Renault swept 12 constructors’ championship crowns and 11 drivers’ title triumphs in the 22 seasons from 1992-2013, more than any other manufacturer. 2010-13: Renault end their works involvement at the end of 2010. But their partnership with Red Bull lifts them to new heights. The duo wins four successive constructors’ titles while simultaneously powering Sebastian Vettel to four straight drivers’ crowns.

However, Renault was not given enough credit for developing the software and devising the engine maps that allowed Red Bull to exploit off-throttle exhaust blowing to devastating effect and win four straight drivers’ and constructors’ titles. The company became the lightning rod for the team’s anger at their lack of performance in Formula One’s subsequent turbo-hybrid era.

With the investment no longer delivering the proportionate marketing returns, Renault decided to come back and win with their own team – returning to the sport in 2016 with a full-fledged works effort for the first time since 2010. They had two options: come back with a works team or leave F1 completely. After a detailed analysis , Renault made its decision – to be present in F1 from 2016. The sport is watched by over 400 million people on television every year. And that alone was a compelling reason for Renault to be present in the sport as the only mass market car manufacturer.

Speaking at the 2018 Paris motor show, Renault Sport Racing President Jérôme Stoll elaborated, “We were not getting any glory from being just an engine supplier and we think that the exposure of the brand is much more connected to the team than to the engine. Nico Hülkenberg snatches a final few moments of calm before the start of a race.

“When you look at the strategy of Renault, with a big expansion in new territories like India, for instance, or China or Africa, Middle-east, etc where the Renault name is not yet fully known or well-positioned, we thought that being in the F1 competition, a premium competition in the car industry, competing with premium brands like Mercedes, Ferrari and McLaren could give us not only brand awareness, but also a right positioning for the brand.”

“Back in Europe, I think that, again, being in this competition can help the brand and all the products to be well-positioned in terms of image.”

The target for Renault’s Formula One return has been laid out, in no uncertain terms, to win.

The brand has won every time they have been in Formula One – whether its races or championships – and the goal this time is to be a title-contending force by 2021. In having their own team back at the end of 2015, Renault inherited an outfit that had suffered from underinvestment. Since then, Renault have been scaling up, investing in infrastructure, people and facilities – both at its factory in Enstone where the chassis are made and at Viry-Châtillon where the engines are built.

Since Renault bought the team, the size of it has grown from a staff of roughly 450 people, to 680 in Enstone and an additional 500 employees in Viry for the engine – taking the total to roughly 1,200 people, now.

The investment is paying off. In 2016, their first year back, Renault finished 9th out of 11 teams in the constructors’ standings. This year, they’re currently 4th in the standings with just one race left. This sort of rise through the ranks is among the factors that convinced Ricciardo to leave Red Bull and put his faith in Renault’s capability to deliver future championship success.

But the next step is challenging the hegemony of the top three teams – Renault’s biggest and hardest move yet.

The current regime of Formula One regulations locks in the advantages of the top teams. That is among the reasons why Renault have set themselves a target of fighting for the title by 2021.

The rules are set for a sweeping change then and Renault are currently in the process of building up to be in a position to take advantage of the opportunity
that this change presents. Because nothing less than victory will do. History demands it.