Special feature: Around the world in a cargo container - Renault & Formula One

Taking Formula One from race to race is like transporting a small army around the world. We find out how Renault does it. 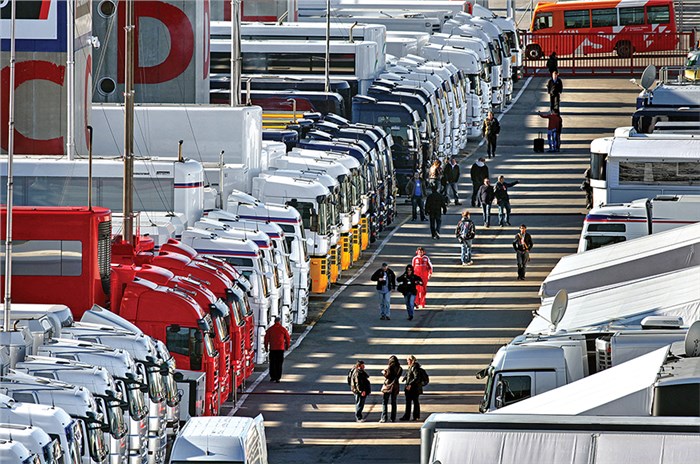 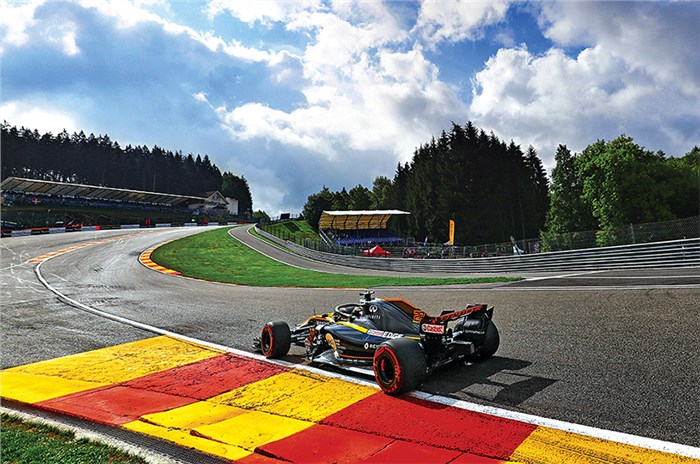 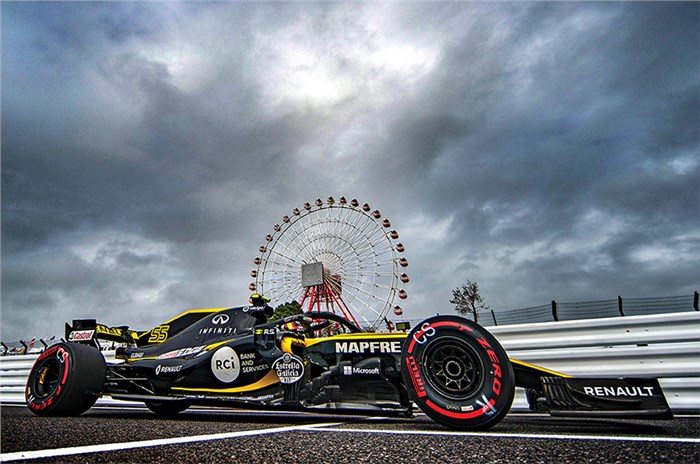 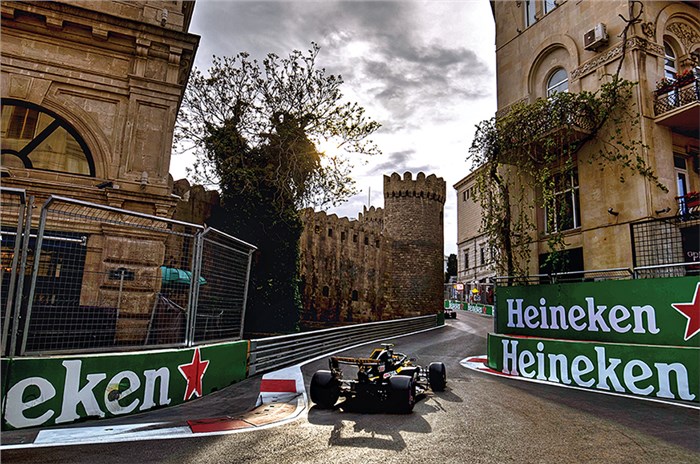 It is the middle of December. The Formula One season is over. The engines have long fallen silent. Even activity back at teams’ factories, usually busy as a beehive, is winding down as Christmas approaches.

This is the lull before the storm. The quiet period before the whirlwind of development, car build, launches, winter testing and yet more development breaks to effectively herald the start of Formula One 2019. 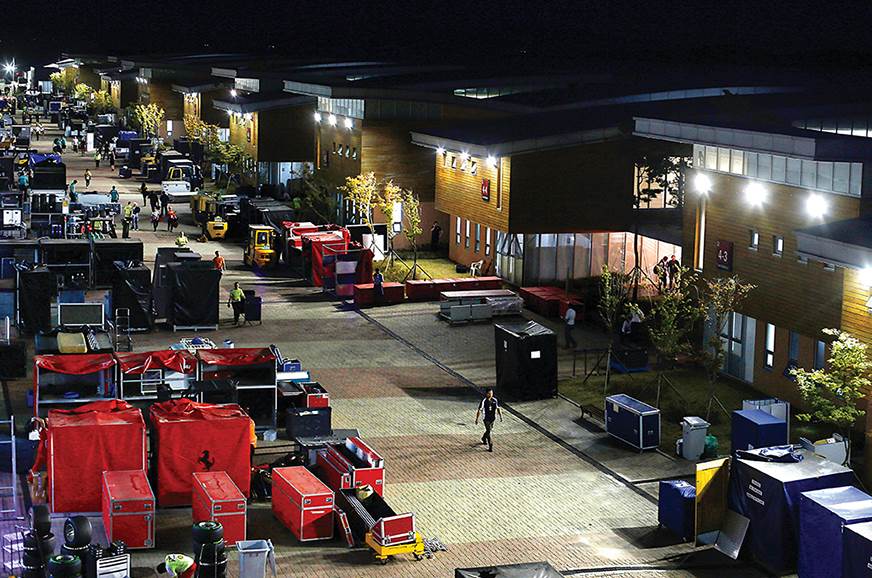 Teams are locked in a race against time to pack up all of the equipment they carry. Pack up begins as soon as the chequered flag falls and sometimes even before.

After a gruelling 21-race schedule, this is possibly the only chance for the hundreds of people who work tirelessly all year round to ensure the two cars they put on the grid are the fastest they can possibly be, to get some well-deserved R&R.

But not for Jean-Pierre Raymond. Back at the Renault F1 Team’s engine factory in Viry, Raymond is hard at work.

The Frenchman is Renault’s engine logistics manager. He – together with a handful of other team members across Enstone and Viry – is responsible for getting Renault to every race.

After all, what’s the point of building the fastest race cars ever if you can’t get them to the races? 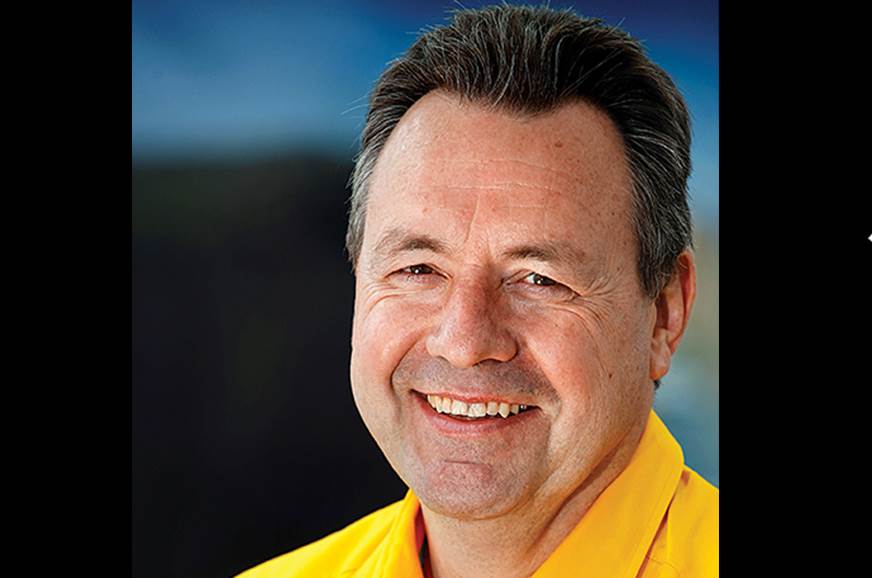 “One of my tasks is to look after the logistics of getting engines to races,” Raymond tells Autocar India.

“It’s like fighting for pole-position. You have to plan down to the millisecond. So the logistics also need to be planned right down to the wire, not just the cars on track.”

Planning down to the millisecond is exactly what Raymond is hard at work doing. This is probably among the busiest of times for him.

The 2019 season flags off in Melbourne, Australia, on March 17, 2019. While that’s still a full three months away, the first of the freight will ship out as early as the end of the month.

If Christmas hadn’t got in the way, it would have been shipped sooner. Even the humble pit-board and markers have to be shipped around the world.

Moving Formula One from country to country over the season is like transporting a small army around the world. The Renault F1 Team alone ships over 60,000kg of freight around the world in a season by land, sea and air.

Altogether, Formula One shipped over 750 tonnes of freight on seven Boeing 747s from the Russian Grand Prix in Sochi to the Japanese Grand Prix at Suzuka alone, with the two races taking place on consecutive weekends in what is known as a double-header or ‘back-to-back’.

“It never ceases to amaze me how it all happens,” Formula One sporting director Steve Nielsen told Formula One’s official pre-race newsletter ahead of the Russian event.

“What Formula One does on the track is special, but, for me, the logistics around moving the sport around the world are just as impressive. 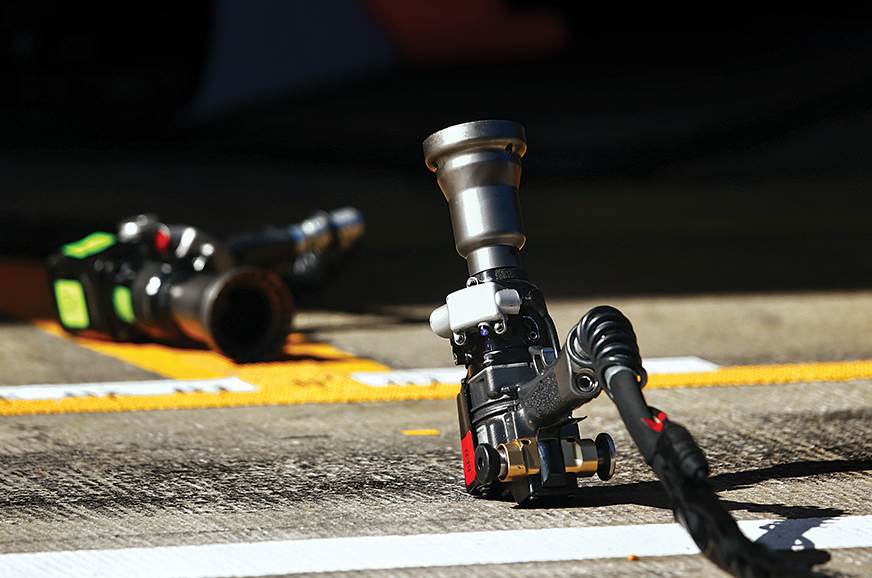 Wheel guns travel as part of the air freight at flyaways, along with the car.

“It still staggers me that we are able to move the amount of stuff we do, over the distances we do, and two or three days later it’s on the other side of the world, set up and working.

“I can’t think of many other sports or businesses that could do it.

“There are other big sports – football, the America’s Cup, they’re our equivalents – but we do this every other week, sometimes twice in the same week.

“The logistics of it are jaw-dropping.”

When Formula One fans turn on their televisions, they see shots of the paddock.

At European rounds they see shiny bespoke motorhomes. They’re called motorhomes but actually they are nothing short of architectural marvels. 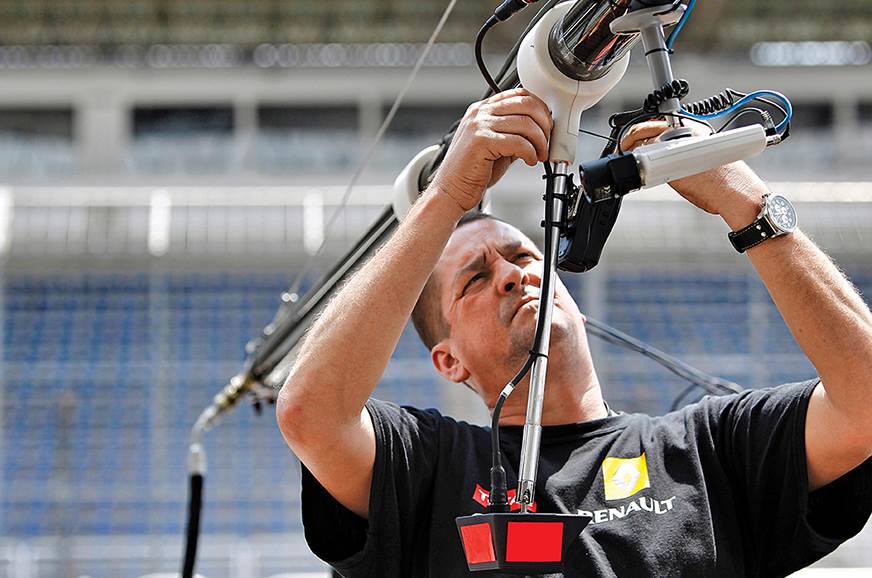 A team member sets up the garage in the build up to a race weekend.

All of this requires time, effort and more importantly material and parts to set up. This alone adds up to about 25,000kg of freight. The cars and the equipment required to run them account for an additional 36,000kg of freight.

The team needs to make sure all of this equipment gets around the world as efficiently and as cheaply as possible. Planning for it starts as soon as the provisional calendar for the following season first comes out, which this year was released at the end of August.

At the European races, everything is transported from race to race by road in the team’s trucks. But for the longer haul ‘flyaway’ races in Asia and the Americas, it travels by sea and air, with Formula One and shipping partner DHL coordinating the logistics.

The cars and all the kit required to operate them are most critical and always travel by air. But the cutlery, crockery, napkins, tables, chairs, refrigerators, pots, pans and other sundries are shipped by sea.

There are differences in terms of cost. While air freight is very expensive, sea freight is cheaper, which is why every year the teams generally have a look at what they can move from the air freight to the sea freight, in order to save a bit of money. 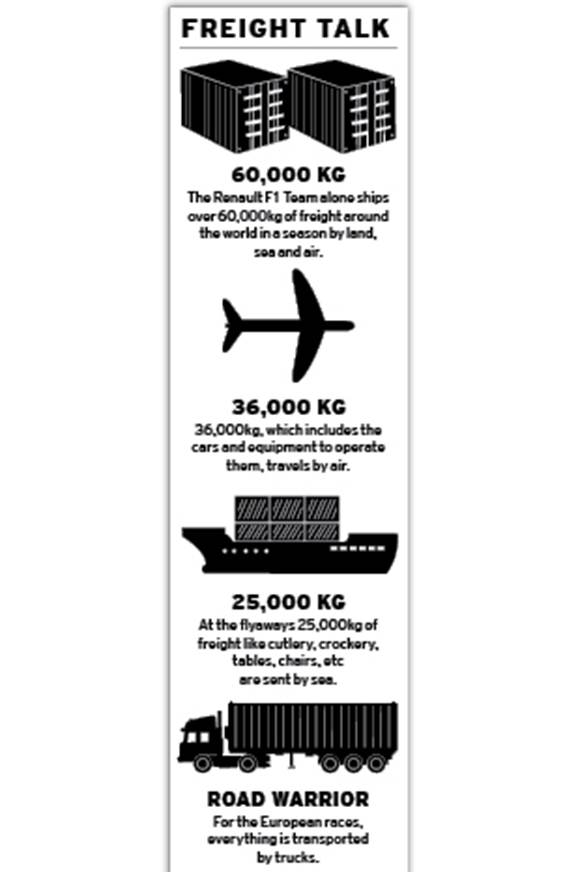 Naturally, the sea freight travels slower. But regardless of how soon it’s shipped out, with the Formula One calendar going to as far-flung destinations on opposite sides of the globe, it’s impossible for it to get everywhere on time.

Which is why at any given time, Renault has as many as five identical but separate sets of sea freight sitting on boats around
the world.

The freight used at the season opener in Australia in March was packed and sent off to Canada which hosted the seventh race of the season in June. From there, it travelled to Brazil for the season’s penultimate race in November.

In 2018, meanwhile, with the season starting a week later than it will this year, the first of the freight bound for Australia, shipped out in the first week of January.

By the first week of February, another batch of sea freight, meant for the fourth race of the season in Baku was on its way, well before a car had turned a wheel in anger. 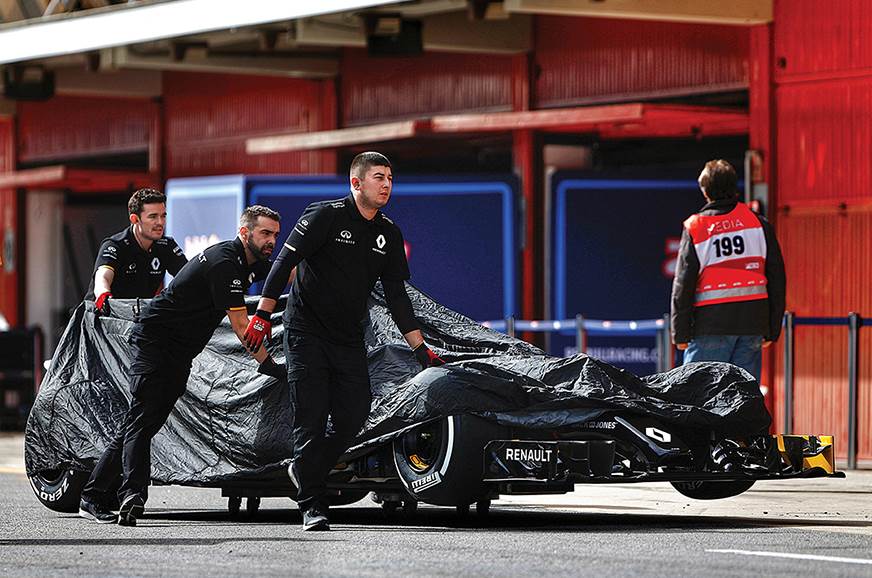 Renault mechanics move a car across the paddock on a trolley during testing.

Formula One loves a challenge and as if the task of transporting people and equipment to 21 countries around the world wasn’t tricky enough, the sport this season threw its first ‘triple-header’ into the mix – three races in France, Austria and the United Kingdom on three consecutive weekends.

It had the makings of a logistical nightmare, to use a cliché. But Raymond and his team made sure it all ran like clockwork.

He takes up the story: “Between Austria and Silverstone, especially, it’s a long trip.

He makes it sound all very straightforward. The only way, however, to make sure all of the equipment made it from Austria to Silverstone in time for the British Grand Prix was for the trucks transporting it to run non-stop.

But truck drivers are legally only allowed to drive a certain number of hours before they have to stop for a rest, according to road safety laws in the European Union. 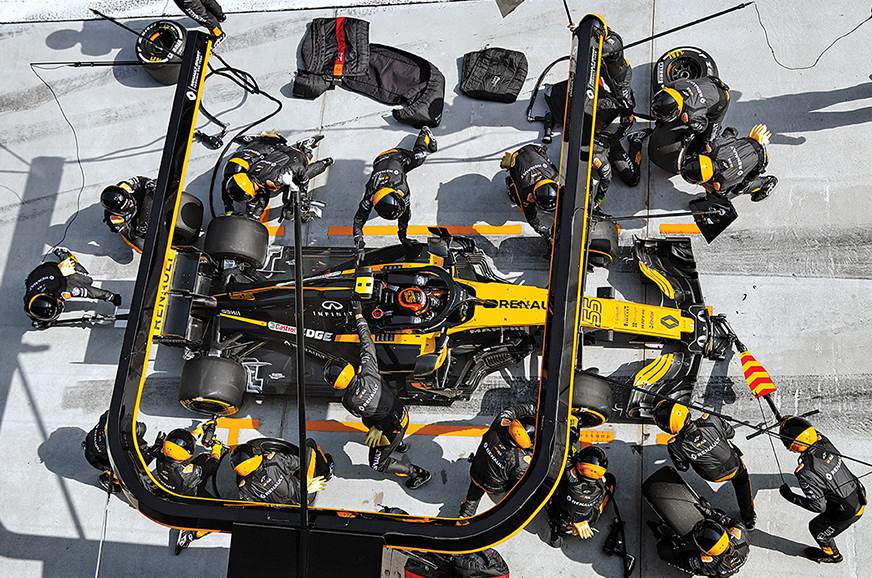 All of the equipment used by Renault for pitstops is developed in-house and must be shipped around the world.

“We had to swap drivers. For example from Austria to Silverstone, the two drivers who started the trip met two other drivers at some point in Belgium where we had sent them by train and they swapped completely.

“So we didn’t stop the trucks and went straight to Silverstone… just to make everything easier and to have everything there on time.

“It had a big impact on the logistics.”

No matter how minutely planned, how much attention Raymond and his team pay to detail, there is inevitably the proverbial spanner that gets thrown in the works.

Sometimes it’s delays and hold-ups at customs, at other times forces of nature outside their control like cyclones. 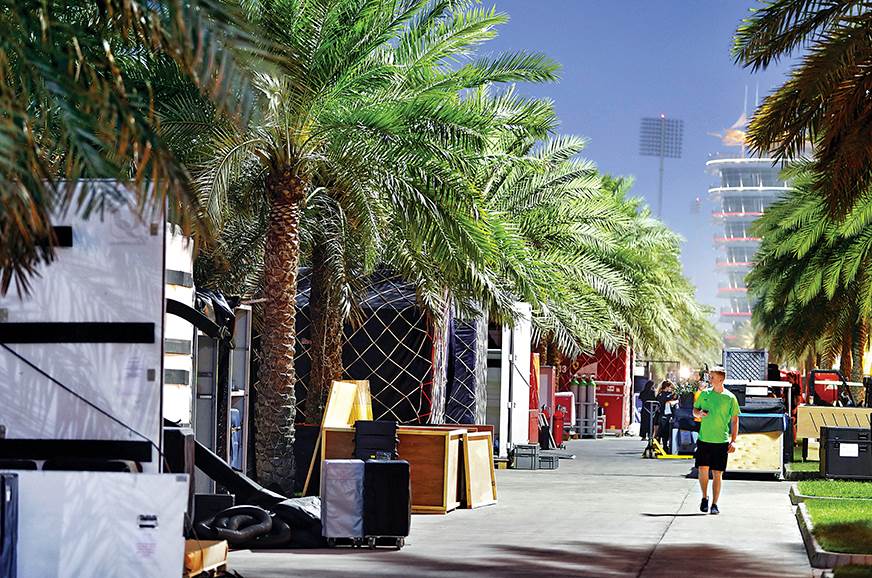 The paddock post-race in Bahrain. The freight is packed up and ready to go.

“To be honest, there isn’t any Plan B,” says Raymond.

“Just wait, be patient and be ready when F1 says the cargo is on track.”

Formula One has mastered the art of making the impossible possible. There is never a problem to which a solution cannot be found.

Sometimes, though, the problem can seem insurmountable.

Like when in 2010 the volcanic Mount Eyjafjallajökull in Iceland erupted, enveloping Europe in an ash cloud, grounding air traffic over the continent and leaving teams stranded for days in Shanghai after the Chinese Grand Prix.

Back then there was a three-week gap between the grand prix in China and the next race. In recent years, the event has tended to be part of a back-to-back. 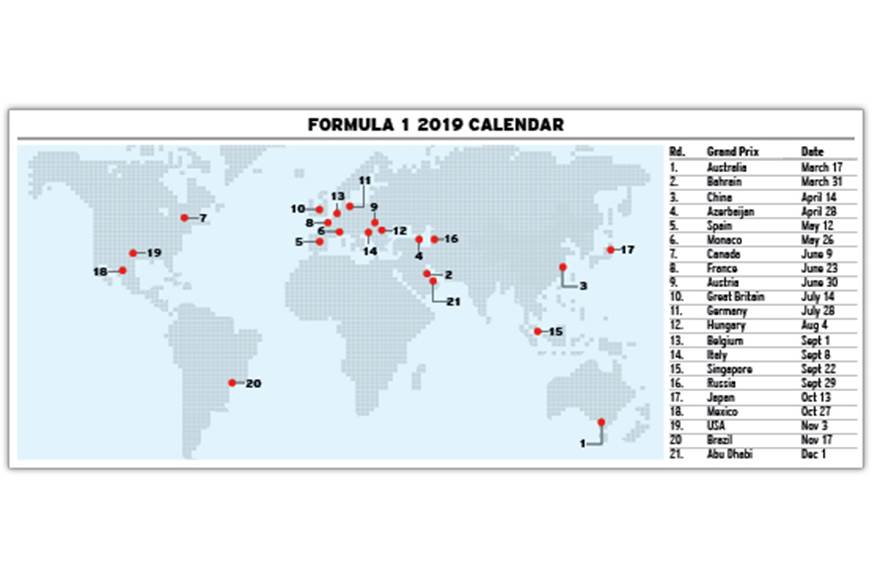 What would teams have done if the scenario were to repeat itself with the race now a back-to-back?

“It would have been very tricky,” admits Renault sporting director Alan Permane whose broad responsibilities include overlooking logistics.

“We got stuck there for three or four days.

“I think we got out on Thursday. I think what would happen is we would get there and maybe the Friday would be compromised but I’m very sure, if we need to be, we can have everyone here, we can work for 24 hours and get things ready.”

Because as the logistics machine that takes it around the world proves, working miracles is all in a day’s work in Formula One.