The first motorsport athlete to win this award, Aradhya has a handful of national karting titles, and has bagged podium finishes in the Formula 4 South-east Asia and MRF Formula 1600 championships. 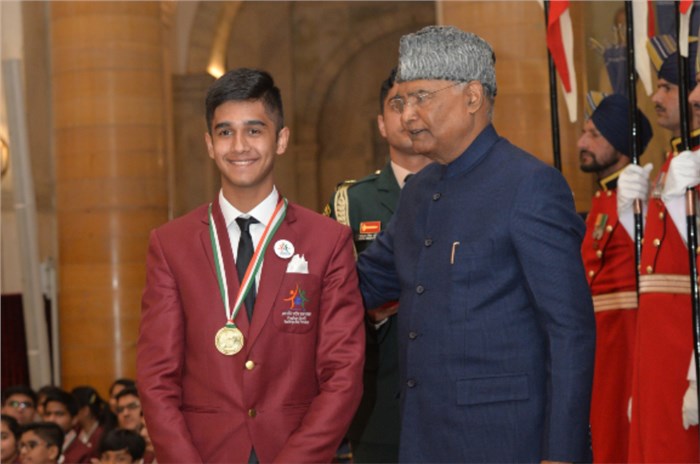 17-year-old Yash Aradhya has been announced as one of winners of the 2020 Pradhan Mantri Rashtriya Bal Puraskar, making him the first motorsport athlete in the country to have received this award. The news gives fresh impetus to the motorsport community in India, with the sport just starting to receive official recognition on the national stage. Just last year, ace rally driver Gaurav Gill became the first-ever motorsport athlete to win the Arjuna Award.

Aradhya was presented the award by the President of India, Ram Nath Kovind, at the Rashtrapati Bhavan. The 'National Child Award for Exceptional Achievement' was renamed the 'Pradhan Mantri Rashtriya Bal Puraskar' last year and it is regarded as India’s highest civilian honour bestowed upon students under the age of 18. Every year, the awards are handed out by the Government of India across various fields like social service, arts and sports. Aradhya was part of a group of 50 students to be hand-picked for the award by a panel set up by the Union Ministry of Women and Child Development.

After kick-starting his racing career in the JK Tyre National Go-karting Championship in 2012, Aradhya made his way through the ranks and started competing in Formula racing in 2017. Over that duration, he won a handful of national karting championships and made some international appearances as well. In 2015 he participated in the CIK FIA Academy Trophy karting championship in Spain, Belgium and France; and in 2017, he was selected by the Federation of Motorsport Clubs of India (FMSCI) to represent India in the Rotax World Finals in Portugal.

Last year, he moved up to the Formula 4 South East Asia Championship and completed his debut season in 9th place overall, bagging two podium finishes along the way. He also picked up four podium finishes in the Formula 1600 class of the 2019 MRF MMSC FMSCI Indian National Championship, including a race win. He was also one of the youngest competitors in the inaugural season of the X1Racing League, driving for Narain Karthikeyan’s team NK Racing Chennai.

“I thank the Government of India for considering me worthy of this award and humbly accept it,” said Aradhya, who also believes this move will push more youngsters in India to take up motorsport outings knowing that their achievements will be recognised.

“While I have had my share of success on the grid in the past few years, this award will always remain special, as this is not just an achievement for me, but for the whole fraternity. This award will inspire other young enthusiasts and they will push themselves more, as they now would know that their achievement will be recognised,” he said.