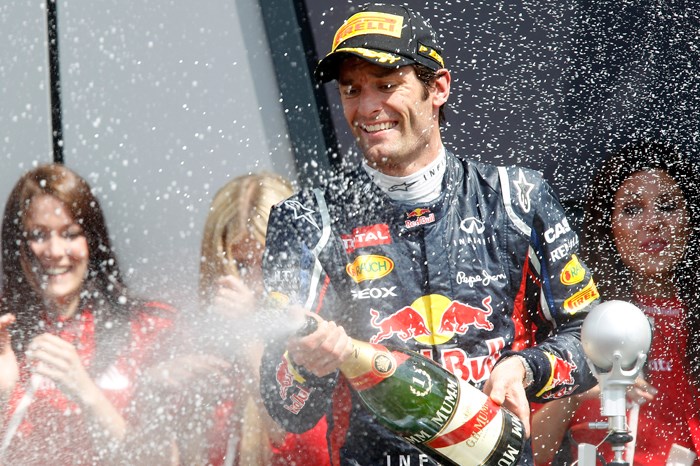 A bone-dry British Grand Prix at Silverstone saw Red Bull driver Mark Webber outfox Fernando Alonso to take the lead four laps from the end, and cut down his deficit in the championship to 13 points from Alonso.

Alonso’s gamble on using soft tyres for the last stint almost made him lose second place to Sebastian Vettel, as he gained on the Ferrari’s tyre-troubled car near the end.

Alonso pulled out a five-second lead over Webber in the first stint and maintained it for the majority of the race. But while most of the field used soft tyres early then switched to hards, Alonso waited until his final stint to try the softs, and could not keep up his previous pace.

Webber caught up rapidly and was on the Ferrari's tail with seven laps to go, trying several moves before deploying his DRS on the run towards Brooklands on lap 48 out of 52. Alonso defended the inside as Webber swept around the outside, and after attempting to retaliate at Luffield, the Spaniard had to let Webber go and concentrate on staying clear of Vettel.

The world champion had run fifth in the opening stint before a slightly early first stop helped him jump to third, where he would finish, unable to catch Alonso in the end.

Felipe Massa spent the opening laps trying ever-more creative attempts to overtake Michael Schumacher's Mercedes for third, finally managing at Stowe on lap 11. The Ferrari lost out to Vettel in the following pit sequence, then resisted the fast-closing Lotus of Kimi Raikkonen to take fourth.

Lotus got two cars in the top six despite Romain Grosjean breaking his front wing in a brush with Paul di Resta on the first lap. The resulting puncture and associated damage ended the Force India's race, while Grosjean charged back from last to sixth.

Lewis Hamilton and Jenson Button could only finish eighth and 10th in the McLarens. Hamilton spent a while in the lead and enjoyed a spirited dice with Alonso as he ran a very long first stint on hards, but then did just a handful of laps on softs before switching back to harder Pirellis. The Briton's pace then faded and he lost seventh place to Schumacher late on.

Although Button jumped to 12th at the start, his progress was less dramatic thereafter. In the closing laps he was in the thick of an epic dice for ninth with Bruno Senna and Nico Hulkenberg, won by the Williams. Hulkenberg (Force India) ran wide at Copse in the heat of battle and dropped out of the points.

The other major incident of the race involved Pastor Maldonado and Sergio Perez. Running seventh and ninth in the first stint, they pitted together on lap 11 but then collided at Brooklands on their out-laps. The furious Perez sustained terminal damage to his Sauber, while Maldonado dragged his Williams back to the pits for repairs and finished 16th.

Completing a bad day for Sauber, Kamui Kobayashi hit several mechanics at his final stop. Initial reports suggested there were no serious injuries and the Japanese driver continued to 11th ahead of Hulkenberg.

Nico Rosberg had a less dramatic bad pitstop during what was already a low-key midfield race, which ended with his Mercedes 15th.