Sebastian Vettel ended his victory drought with a comfortable win in the European GP. 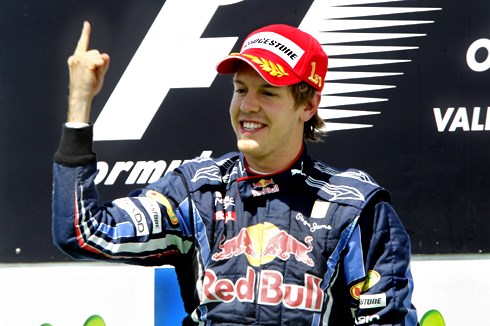 Sebastian Vettel ended his victory drought with a comfortable win in the European Grand Prix in Valencia - while his Red Bull team-mate Mark Webber was fortunate to emerge uninjured from a massive accident that saw him vault Heikki Kovalainen's Lotus.

Lewis Hamilton took second despite a drive-through penalty, with Jenson Button making it two McLarens on the podium. Ferrari's day was ruined by the safety car for Webber's crash, leaving Fernando Alonso only ninth and Felipe Massa 15th.

Webber's bad day began when he lost out severely during an unruly opening lap, which saw wheel-banging and run-off visits throughout the field. The Red Bull was immediately passed by Hamilton and then pounced on by the two Ferraris while out wide. His free-fall continued and by the end of lap one Webber had been elbowed all the way back to ninth.

Unable to get through the traffic on-track, Webber made an early pitstop at the end of lap seven, where he lost a few more seconds as his left front wheel proved stubborn. That put him back out behind Kovalainen, and as he tried to pass the Lotus three laps later he went flying over the back of it on the fast approach to Turn 12.

The Red Bull wiped out an advertising board hanging over the track before landing upside down, rolling back onto its wheels and ploughing into the tyre barriers - though remarkably Webber climbed out unscathed.

With the safety car called, most drivers from fifth-placed Button back immediately dived into the pits, while the top four had to complete a further lap. Vettel was already past the pit exit by the time the safety car emerged, but Hamilton was right alongside it. After a moment's hesitation, he accelerated past - but having passed the relevant line across the track meant he would later be penalised for overtaking the safety car.

Vettel and Hamilton were therefore able to rejoin first and second, while the Ferraris were caught behind the safety car and fell to 10th and 17th - leaving the team furious. By the time race control awarded Hamilton his penalty, he had enough of a gap over the third place Sauber of Kobayashi who was holding back Button.

Hamilton started carving into Vettel's lead, but the German had pace in hand and was able to answer Hamilton with a new fastest lap five laps from home, putting his second victory of 2010 beyond doubt.

The penalties mean Fernando Alonso is elevated from ninth to eighth, as he overtakes Buemi, and Nico Rosberg gets the final point from de la Rosa, 10th in the race.

It was a reasonable race for Karun Chandhok. The pace early on was reasonably good but then he started to struggle with the option tyres. The team decided to pit under the safety car and switch to primes which was a good decision as Karun was able to then settle into a rhythm and pull away from Bruno. At the end though, having done 47 laps on one set of tyres he didn´t quite have enough pace to fight against Timo and he managed to muscle past on the final lap. Karun ended the race finishing 18th.