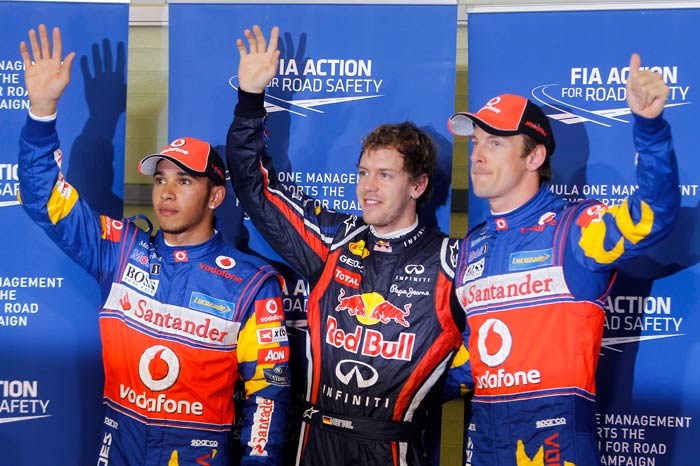 Sebastian Vettel equalled Nigel Mansell's record of 14 pole positions in a single season as he beat the McLarens to the top spot in a huge qualifying battle in Abu Dhabi. McLaren's Lewis Hamilton and Jenson Button had to settle for second and third behind the world champion's Red Bull, with Mark Webber fourth for RBR ahead of the Ferraris.

After topping both second and third practice, Hamilton went quickest in Q1 and Q2, then took provisional pole on his first Q3 lap with a 1m38.704s - which was 0.042 seconds quicker than Vettel could manage at that stage. Button was only fourth after the first runs, but burst to the top with his second attempt. He only stayed there for a handful of seconds before Hamilton came through 0.009s faster to reclaim pole. Vettel was still on his last lap, though, and he produced a 1m38.481s and beat Hamilton by 0.141s.

Behind Button and Webber, the Ferraris filled row three, having never looked likely to threaten for the leading positions. Fernando Alonso was 0.6s off pole and a similar margin ahead of team-mate Felipe Massa, who caused a brief delay to qualifying when he demolishing a chicane marker post in Q2 and left debris on the track.

Nico Rosberg and Michael Schumacher were seventh and eighth in their Mercedes, with the Force Indias of Adrian Sutil and Paul di Resta completing the top 10. This time di Resta was the only driver who did not attempt a Q3 flying lap.

The major news outside the top 10 was the Williams team's awful season getting even worse, as its cars ended up sharing the back row of the grid. Pastor Maldonado was only 17th quickest and already had a 10-place penalty for exceeding the eight-engine limit, while further engine issues for Rubens Barrichello meant he did not set a time at all.

As practice had hinted, Force India had a comfortable margin over its usual rivals Toro Rosso and Sauber, with STR's Sebastien Buemi and Jaime Alguersuari only 13th and 15th, and Sergio Perez and Kamui Kobayashi 11th and 16th for Sauber. Renault's suspicion that it would struggle at Yas Marina proved correct too, as Vitaly Petrov and Bruno Senna took 12th and 14th.

Heikki Kovalainen beat his tail-end rivals by a comfortable 0.9s, with his Lotus team-mate Jarno Trulli next up. HRT's Daniel Ricciardo produced a sensational first qualifying lap which put him close to Kovalainen, and ahead of the rest of the backmarker pack, but he would ultimately slip behind Trulli and Virgin's Timo Glock.